An academic conference for black students raises questions about the country's bizarre fascination with elitism. 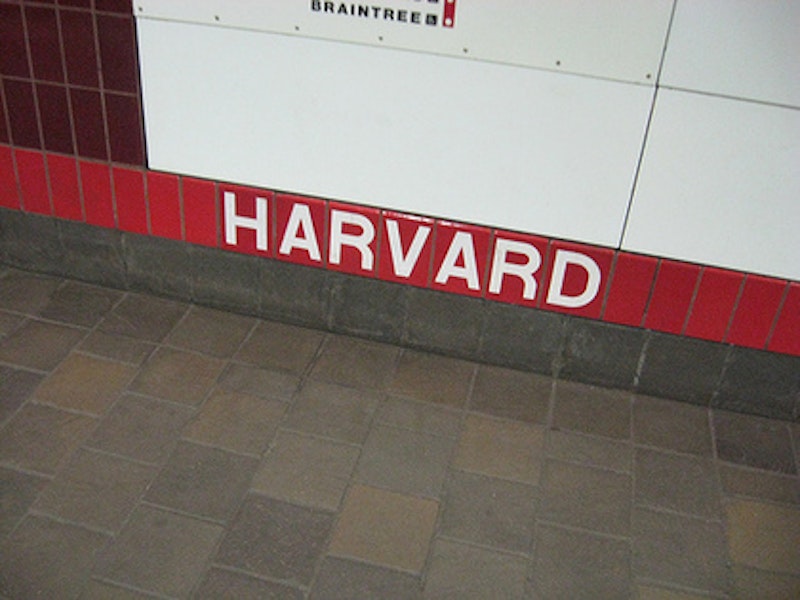 I’m bored out of my mind at this academic conference in the Capital of Fashion Disasters. It’s for scholars of color who currently have or have had this particular national fellowship. In one of the sessions I meet my nemesis, a.k.a. The Harvard Girl. I typically loathe people from Harvard because almost all of them have irretrievable butt plugs deep inside their anal cavities. This one, who foams at the mouth for 10 minutes about how she goes to Harvard, isn’t different. Before the session begins, in predictable academic style we go around the room and introduce ourselves, saying what schools and departments we’re from, defining “what we work on” as the audience coos and nods in approval.

Harvard Girl: “Hi, my name is Amanda and I’m a second-year in African-American Studies and...um...what school do I go to? Oh yeah, HARVARD,” she trumpets brassily, as if she expects people to instantly pass out because no one else in the world has ever gone to Harvard.

I fantasized about slapping her with an academic journal, but then I realized that it’s okay; she probably just needs to get laid real real good during office hours.

As I sit in this wood-paneled room, intellectualizing with the brightest scholars of color from some of the hottest universities in the country when I could be doing something a million times less abstract—say, going fishing—I couldn’t help but ask myself: Have I become an elitist yuppie?

Yuppies (black or white) are people who come from money, whether new or old. Sometimes, but not always, they take care to let the plebeians know that they live in a completely different class bracket. They’re like, “Oh, you shop at Sav-A-Lot? I only shop at Whole Foods. Now pardon me while I run to dip my almond biscotti into my English Breakfast tea.”

But yuppies aren’t just people with money, taste and a swank pad—there’s an intellectualism attached to them, too.

One of the things people hate about yuppiedom is the elitism and pretentiousness that intellectualism brings to the table. Yuppies convene and reproduce one another at good schools, often private, have little or no connection to pop culture, and talk all proper and shit. Yuppies think they’re just so fucking neat for reading Shakespeare in an unknown coffee shop, for having read Kant in the original German, or for living in a cool loft apartment in an ultra-hip part of downtown, via Daddy’s Money.

Though I was not born into money, it’s true that during my few years at The World’s Greatest University, Ever, I seem to have acquired a pretty specific lifestyle: art gallery openings in New York, travel to various places, an immense amount of “free” time, an obsession with minimalist design, and a reliance on Whole Foods. I even have a metal bowl of gray stones on the bar table in my kitchen for added affect. But you know what? Random rocks in a bowl in the kitchen are fuckin’ dope.

The thing that drives elitism, though, is this artificial distinction between “high” culture and “low” culture. That’s the thing that pisses me off about elitist yuppie bitches: they often enjoy one thing to the exclusion of everything else. Because to them, high culture = smart, intellectual, inaccessible, exclusive. Low culture = dumb, stupid, predictable, passive, everybody’s in. I say, why not enjoy the best of both worlds? Who’s to say you can’t read Kant or go to a fucking museum and then go get crunk at the club?

Long story short, I don’t think I’m any more yuppie-like or elitist than I’ve ever been.      It’s hard not to become a product of your environment. That’s because environments are totally contagious. If people around you talk a certain way, you’ll likely pick it up.       If they dress or act a certain way, you’ll pick that up, too. Think of your environment as a good perm—it’s gon’ burn out all possible kinks until every strand of hair is the same. I guess I just don’t really care enough about proving to people that I’m smart or whatever to be all in your face like the Harvard Girl. What a twat. Besides, my cousin Courtnee and I still laugh our asses off at pretentiousness. When I got into The World’s Greatest University, Ever, she asked if I would go and I was like: “Girl, now you know I wanna eat cucumber sandwiches and ride horses with the white people, too, okay!”

The biggest problem with elitism and yuppiedom for me is racial stereotype. I fear that a lot of smart black people feel like they have to prove their worth in the world by behaving a certain way, like performing their intelligence or something. My grandmother always told me that I had to be 10 times smarter than my white schoolmates. Still, if you’re black and smart, you’re automatically an elitist by default. Your black peers ask you why you talk white, as if you’re abandoning the Black Cause or something through your education or cultural interests. And then your white peers say that they’ve never seen such a well-poised black. Trouble all around! Just look at Barry Obama, who gets cast as an east coast elitist even though I find him to be one of the most down to earth homies around. Is he an elitist, or is he just a smart black guy who happened to go to Harvard?

The good thing, though, is that no matter how much education I get, I will still get ghetto real quick. Don’t make me take off my earrings.