My Short Time as a Fast Food Grunt

The underappreciated world of the cheese fry maker. 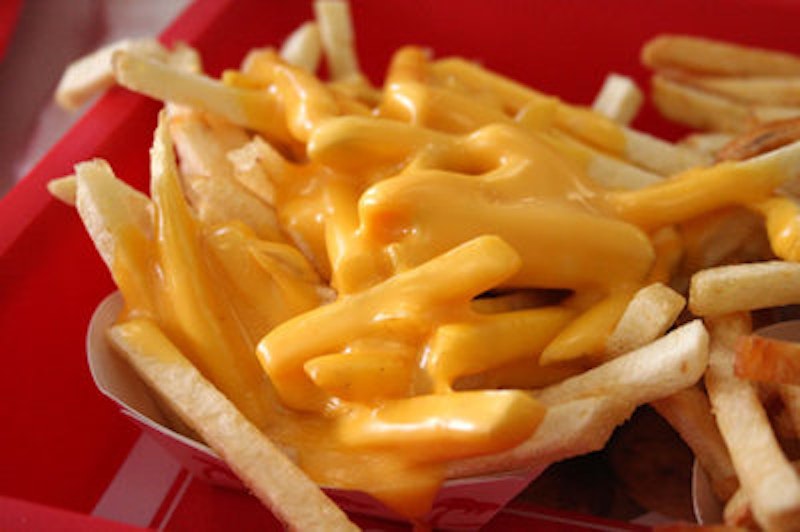 This is my second year as a Marching Band Mom. I managed to dodge the email requests for football game concession stand duties for almost two entire seasons, until last week. The email pleaded: it was Senior Night, and the marching band parents would be honored on the field at halftime with their kids, leaving the very busy hamburger-and-hot-dog stand nearly vacant at the busiest time of the year’s biggest game. Since it was also the last game of the year, I figured I’d offer to help: how bad could one night be?

I was nervous, especially since I completely avoid the concession stand on a Friday night where hordes of screamy, smelly, overly-caffeinated high school kids are lurking around like a teen zombie apocalypse. And now I’d be serving them food. Dedicated educators who have to actually attend/monitor these Friday night madhouse after-school-hour events deserve some kind of prestigious teacher award, or booze and chocolate at a minimum.

I arrived at the concession stand a half hour before the game and immediately made the mistake of telling someone it was my first time. A smiling woman offered to show me the ropes, and then, in a flash, I was filling cheese fry orders like it was my job. Because it was my job, for over three straight hours. I didn’t have to serve the zompoc, but I had to respond every time this one woman would shriek “CHEESE FRIES” at the top of her lungs at halftime when there were already 14 orders hanging up in front of me that I couldn’t fill because the fryer simply doesn’t produce fries as quickly as the football fans consume them. I may or may not have repeatedly envisioned cheese sauce “accidentally” dripping down the face of CHEESE FRIES yeller’s head.

One guy told me not to put so many French fries in the fry boats, another told me to put more in: hazing for sure. At one point someone introduced herself to me as someone’s mom, which annoyed me because I hate it when people, as an introduction, say they’re so-and-so’s mom, like they can’t even remember their own name. I smiled at her and said “I guess we’re all someone’s mom or we wouldn’t be here right now,” which was probably rude, but hello, cheese fry orders aren’t filling themselves and I’m busy here. Go fetch a hot chocolate or whatever your job is.

I don’t understand why people don’t order more nachos. I have vats of cheese and tons of chips in front of me and it’s cheese fry orders on the magnet strip as far as the eye can see. There are a few perks to working in the concession stand, but only after the nearly-three-hour rush is over and you’ve served no less than 500 orders of French fries, about half of them with cheese. Nearly starving and having fantasized about this unique opportunity, I set about creating for myself a perfect French fry order in the way you could not even have it your way at Burger King. I love the burned French fries and so for about 10 orders or so, I collected, one by one, the most burned fries and put them in their own paper boat above the counter, eventually collecting my ideal order of French fries. I ate them with my other job perk: a deep-fried hot dog one of the other band parents said he was going to experiment with.

At the merciful end, I breathed in/was caked in so much French fry grease that I could feel a layer of it on my face and in my hair: it took me awhile to realize that the reason I could hardly see out of my contacts is that my eyes were coated in a thin layer of frying oil. When I walked in the house and plopped on the couch in a near-death dramatic fall, my family remarked about the house smelling like the drive-thru window at McDonald’s.

I have a newfound respect for fast food employees. I worked a mere three-hour shift: I honestly don’t know how they do it fulltime. A few days after the game, at a Hardees window, I was so overly polite and repeatedly thankful that the drive-thru window employee starting looking at me a little sideways, like I might be a tiny bit mad.

And the hometown football team? Ended up extending the season into a playoff matchup of the same two rival teams on the following Friday night. But the Senior Band parents have already been honored, so I figure I won’t have to see the inside of the concession stand until late next fall.