If anybody can do art, then art is for anybody. 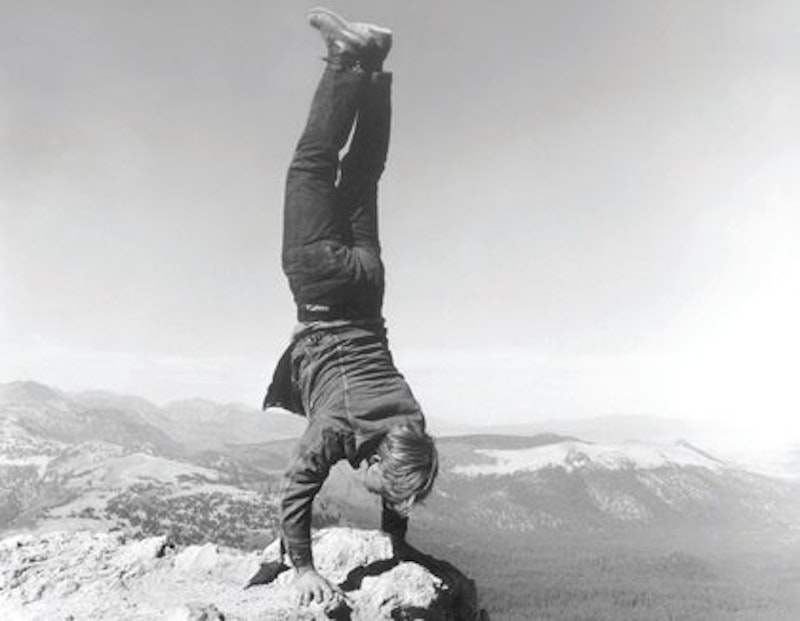 "Art can be anything. You can paint a chair red and put purple polka-dots on it and put it in a museum, and that's art."

That's a quote that might’ve come from some old school painter complaining about the crappy decadence of Jeff Koons. Or maybe from a giddy hipster celebrating the victory of post-dada.

But in fact it wasn’t the crotchety painter or hipster, but my 10-year-old. We were taking a walk over to the Smart Museum in Chicago’s Hyde Park to see the exhibit State of Mind about California conceptual art of the 1970s. I was explaining conceptual art, and got halfway done when he piped up and said the bit about the chair in order to show me that he understood it all already and could explain it better than me anyway.

If it seems weird that a 10-year-old would get conceptual art, that probably means you haven't seen enough conceptual art. Conceptual art is goofy, interactive, and gimmicky—much more fun than staring at some flat canvas. The first piece you see on entering State of Mind is John Baldessari's "California Map Project" (1969). Baldessari observed where the letters in "California" fell on a map, and then went out to those locations and made the letters on the ground. So you've got a series of 10 paintings each with a letter, often hidden. It's a clever puzzle, and what kid doesn't love clever puzzles? My son was delighted—especially when I pointed out that the "L" was made by a telephone pole and its shadow. And then even more when we both realized (from the notes) that the shadow isn't a real shadow, but was drawn on.

The boy loved Robert Kinmont's 8 Natural Handstands too, which shows the artist doing handstands in various uncomfortable and dangerous places, including on the edge of a cliff. He was even more delighted by Bruce Nauman's "Yellow Room" where you go into a room with yellow fluorescent lights which, as he gleefully pointed out, turned the white parts of his Dr. Who shirt yellow (we were both pretty thrilled to figure out that the walls of the room were themselves white; they only looked yellow because of the fluorescent.) There was a piece created by crumpling up colored construction paper and throwing it at the wall; my son cheerfully read the artist's instructions to the curators. Another was a bunch of poles on a raised platform; you walk around on it and the poles light up. He asked me incredulously if you could really hear ice melting while we looked at a tray with ice in it, surrounded by serious looking microphones. He said "ick" when he saw Suzanne Lacy's photos of herself floating in a pool with cow guts on her. And when he saw Paul McCarthy's short film showing his penis just sitting there, my son said "ick" again. You have to think both McCarthy and Lacy would be pleased with that reaction.

A museum guard did kindly warn me about the adult content before we got to that section. But we forged ahead since I figured he'd seen nudity before and doubted that he'd be especially traumatized, as indeed he was not. The potential anxiety around kids viewing art, though, seems telling. After all, one of the things that you often hear about modern art is, "my kid could do that"—and, in fact, when he was explaining modern art to me, my son said could do many of the things he'd seen in museums.

One of the things contemporary art has done is deskill art-making. Art is just crumbling up pieces of paper and tossing them in the corner, or putting different light bulbs in a room, or (as my son says) painting a chair funny colors. It's no longer about mastery or education, which means that it's no longer symbolically about being an adult. If anybody can do art, then art is for anybody—and the "anybody" often means, pretty directly, the group who is seen as least masterful and least skilled.

My son's favorite piece, I think, was by Lowell Darling. It consisted of diplomas to the "Fat City School of Finds Art," which patrons could take away with them.

"Whoa," he said without a smidgen of irony, "Am I really an artist now?"  "Well…." I said. He figured it out quickly enough, but still wanted to take the diploma home and sign it. If art's a state of mind, then being an artist is just pretending to be an artist anyway. And kids are good at pretend.