On the incomplete version leak of Kanye West’s “God Level.” 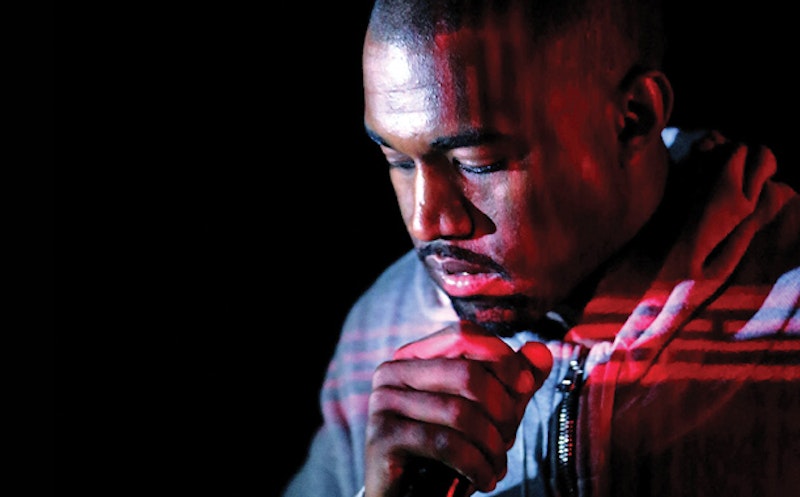 First things first: three or four weeks after this review is published, it’ll be irrelevant. Second things second: the version of “God Level” that’s out on the Internet right now—an incomplete take, it seems—arrives with a garnish of lyricism, a fact that many are nonplussed by. Third things third: everyone throwing shade at this song in its current state is dead wrong. Here’s why.

“God Level” initially surfaced, over the weekend, as mood music for an Adidas commercial about World Cup soccer idolatry; it’s a perfect fit there, in part because the dearth of verses presumably made the Adidas music supervisor’s job much easier. The production is a bowels-as-sparring-bags fist-flurry of drums, wood-knock, and bass that, sonically, makes me think of mold expanses magnified by a microscope.

It is fierce, in a warpath-clearing way, although it doesn’t necessarily bother to evolve much despite being produced or co-produced by enough dudes to field a pick-up street hockey team in a Florence slum. On good headphones, it can suggest that the 77 Boadrum crew are performing outside of your house, on your house, with a bassist and a taciturn Kanye West in tow.

But if musically, “God Level” is about its own post-Yeezus, industrial-stomp restlessness and relentlessness, lyrically, “God Level” is about what is expected of a deity, or at least of a demigod. Very little is said, because deities don’t really impart much to mortals; they exist on a different plane than we do, have different concerns, view the universe through very, very different eyes.

The rumbling percussion, then, is representative here of life, nature, humanity, the ceaseless swarm of time and tide. For many of us, existence is one long, unbroken non-event to the extent that it can be a struggle to tell days, weeks, and months apart. Until, of course, something cataclysmic happens: a hurricane, earthquake, terrorist attack, a meteor strike, or other “act of God.”

And that’s the role that West’s few-and-far-between couplets play in this context: “Provide a new coffin/you don’t see murder like this, this often,” the cold-eyed “God level” chants, “cocks in your daughter.” They’re thunderbolts, shot from above to wake us up, and, while I know this won’t happen, it’d be a masterstroke of metaphor were West to stretch this out to eight or 10 almost wordless minutes—adding no other words—and make it the opener on upcoming LP Made In Florence. Symbolism train-spotters can only dream.