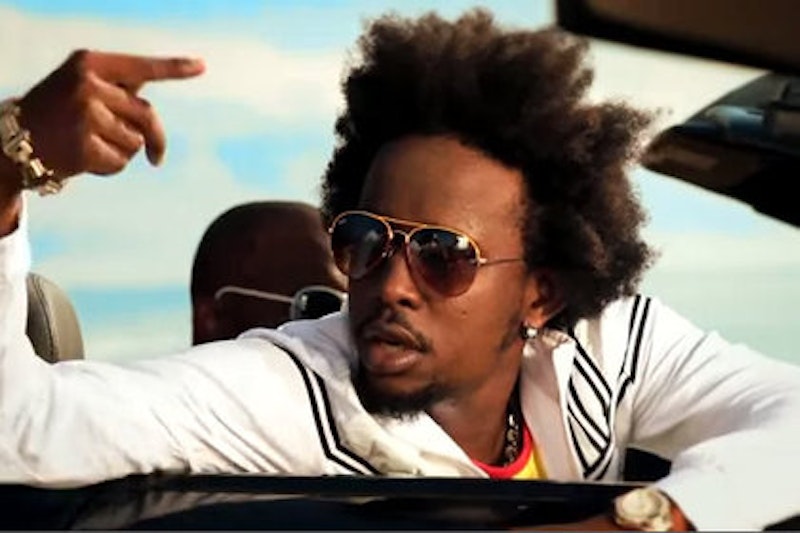 Summer is the season when the Jamaican music known as dancehall sneaks its way into American consciousness. The singer Popcaan’s debut full-length comes out June 10th, marking his bid to join Sean Paul and Beenie Man as one of the select few dancehall artists to occasionally crack radio playlists. But if you can’t wait that long, look to the talented producer Ricky Blaze, who just released a short EP entitled Uptown Julie.

Blaze’s biggest credential is probably “Hold Yuh”—a 2010 tune for the singer Gyptian that revolved around a pleasingly simple keyboard beat. But Blaze is hardly a one-hit wonder, having worked with a diverse cast of artists, including Philadelphia R&B singer Jazmine Sullivan (just now making a comeback after a four-year hiatus), dancehall star Vybz Kartel, and Major Lazer (one of the DJ/producer Diplo’s many projects). Blaze puts out his own music intermittently as well—the EP My Name Is Ricky Blaze came out in 2010 on Atlantic Records.

Blaze now has his own imprint, FME, which stands for Fire Music Entertainment. Staying true to the variety of Blaze’s past collaborations, FME is based on openness—“It’s wherever dope talent is,” he notes in an email. “I like working with dope artist[s] of any genre.” Some producers focus on a single sound, but Blaze, an “American-Born kid with [a] Caribbean background,” has always liked to mix and match. As a young DJ, he “listened to a ton of vinyls” and began to see raw materials he could mold, things he “could've twisted in cool ways.” He’s a fan of “cool eras of fusions with hip hop and reggae,” like the mid 90s, when Toni Braxton’s hit “You’re Makin’ Me High” received a dancehall remix courtesy of the Jamaican singer Mad Cobra.

FME’s most famous singer is Gyptian, but Blaze also has seven other artists in the fold. He’s got “over 4000 tracks pre-produced already,” so his singers have plenty of beats to choose from, though he’s also ready to “create something on the spot,” if that’s what’s needed. He tries to work around “personalities and vocal abilities,” while keeping in mind “what’s current” and looking to add a little extra something—what he calls a “futuristic vibe.”

Uptown Julie offers four different takes on the same beat, all from FME artists, as a sort of showcase of the crew. This sharing-the-beat approach, common in music with Jamaican roots, stands in contrast to the sometimes overly-restrictive rules of the American music industry. The English dub aficionado Adrian Sherwood—who has worked with Bim Sherman, Mikey Dread, and Prince Far I, among others—described this method in the book For The Record, published last year: “There’s nobody in the world, except for the people from Jamaica, who version their rhythms… 20, 30, 40 cuts of a great rhythm… the Jamaicans worked autonomous of the business, which was brilliant. It’s the most uncluttered music…”

Gyptian gets the first crack at the rhythm with “Stunta.” It’s a love song with talk of slowing down and speeding up; a few synthesizer lines zip by and Gyptian’s flexible vocals careen around the beat. Kes the Band repurpose the rhythm for the celebration of summer. They have less of Gyptian’s smoothness, but they compensate with an exuberant, shouted hook. Blaze’s own take on the track is lusty and bittersweet, pointing back towards romance. On the final version, Zoela combines love with the season by finding a man “hot like the summertime.”

In addition to Uptown Julie, new tracks have been going up on FME’s soundcloud page regularly. “Take Ya Money,” featuring Chelley, sounds like an M.I.A. update with swagger to spare in its loping beat, whistles, and horns. Denyque’s “Your Love,” from the end of last year, exists at the other end of the spectrum—crystal-clean 80s-leaning pop.

Blaze saves some songs for himself, and these are slightly different—he describes them as “a little more edgy and daring.” (The singer actually tries to limit his own releases, “due to [his] array of different genres… and not wanting to confuse fans.”) Unlike the summer love on Uptown Julie, a solo track like “Never Be” is anguished and glitchy, with Blaze repeating “we can never be friends” over distorted bass and strange drum machines. Last year, he put out a free mixtape, The Maestro, which also showed impressive range: reggae, a collaboration with Jim Jones of the New York rap group the Diplomats, club beats, and songs like “Tee Tee Bad.” Of all the post-Drake R&B songs flooding the Internet, “Tee Tee Bad” is one of the strongest—snappy but hollow, and featuring Blaze’s dancehall-inflected vocals instead of the usual crooning.

Blaze thinks he can tell when he’s got a hit in the works. This is partially because he’s closely involved in the behind the scenes process—as he explains it, “I listen to [the song] a ton of times and …I see the whole marketing plan.” But he’s got the ear too: he “listened to ‘Hold Yuh’ for 1 week straight on repeat,” and that one went on to blow up. It turns out he did the same thing with Uptown Julie. Maybe it’ll be a Ricky Blaze summer.