Y'All Want a Shingle?

On Korn’s standard-bearing “Get Up!” 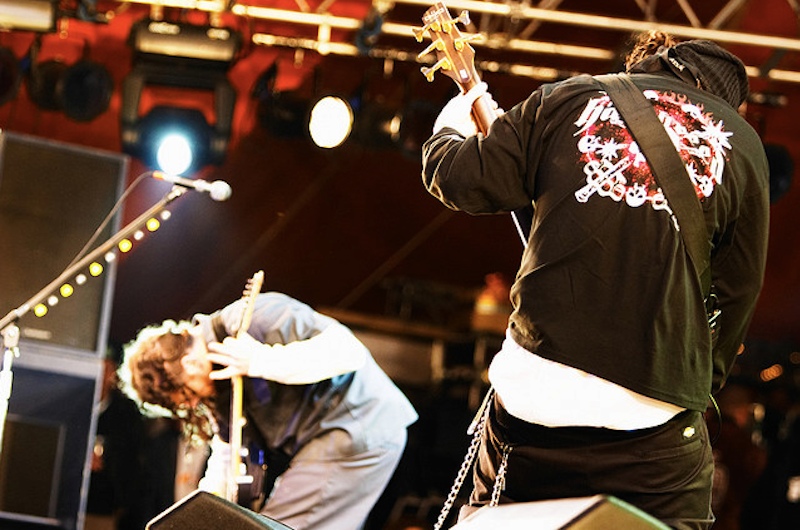 Earlier this year, the late, lamented print music magazine Cowbell did what print music magazines do when their critical brain-trusts are divided as to the merit of a new or emerging artist: it ran pro- and anti-Skrillex album reviews side-by-side. To be honest, I just skimmed these reviews because I lack a personal investment in the burgeoning (I guess) dub-step genre and because I couldn’t get my mind around the thoroughly ghastly nature of “Skrillex” as a name for anything. (I still can’t.) It suggests some sort of corporate Terminator robot, a shadowy monolithic corporation, or an ill-fated video game console; the very idea of listening to a project that forces me to muse, all at once, on krill, skillets, Sizzlean, “scrilla,” and industrial-strength insecticides goes well beyond nauseating, so I couldn’t tell you what Skrillex sounds like.

Skrillex—whatever Skrillex is—had a claw in producing forthcoming Korn album The Path of Totality (Roadrunner); you can hear the result of this unholy alliance on a lead single called “Get Up!” Yet another attempt on the part of these Bakersfield, California mooks to re-invent themselves, “Get Up!” essentially delivers what Korn singles have delivered for millennia: soft-to-loud-to-PSYCHOTICALLY-LOUD compositional dynamics, tortured, quavering Jonathan Davis mewling, drop-tuned guitars and bass so pulverizing they could disembowel Galactus, then drenches the result in synthesizes, twists the “manic” knob ever so slightly, attaches unusually short bungee-chords and nudges it over the edge of a second-story balcony. “Get Up!” doesn’t sound like anybody’s idea of game-changing or paradigm-colluding; it sounds desperate, expected, the cattle-prod jolt to a crumbling template that finally reveals how bankrupt that template actually is. And more disappointing than Davis’ anti-hermetic diatribes—is there seriously a less nuanced this-shit-is-fucked line than “Times are looking grim these days/Holding on to everything/It’s hard to draw the line”?—is his lack of lyrical inquisitiveness regarding the very real, very present threat represented by the mystical, mysterious Skrillex, which is rumored to roam the Hollywood hills after sunset, baying at the moon and skinning the occasional wild coyote.