With Replica, Daniel Lopatin has established himself as the best of the best. 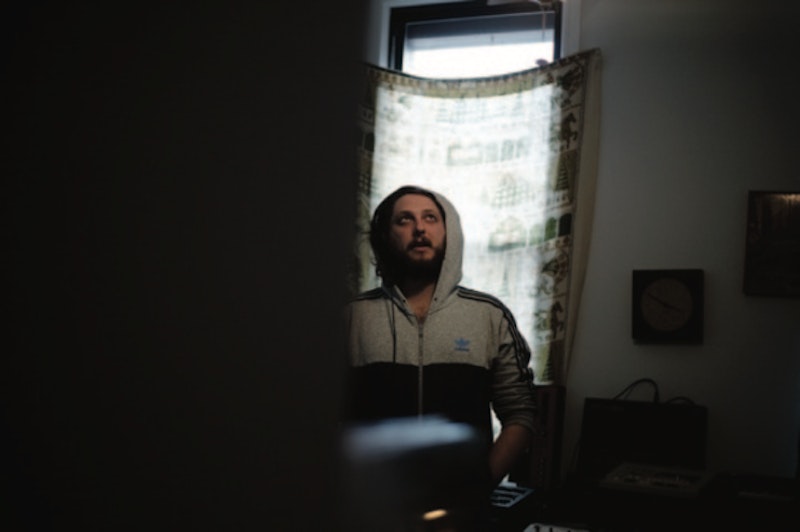 Is Daniel Lopatin God? The man behind Oneohtrix Point Never and one-half of the robo-funk-pop duo Ford & Lopatin, is on a serious roll. The latter group released their debut Channel Pressure earlier this year, a record that could go toe to toe with something like Daft Punk’s Discovery, and his newest LP as 0PN, Replica, comes out next week, with a full stream on Mexican Summer’s Soundcloud now. Lopatin is on his way to becoming one of the underground’s avant statesman, and Replica should go a long way to that end—it’s a brilliant record at precisely the right time.

Vintage synth swells, dunes, and drones dominate 0PN’s sound, but Lopatin incorporates chopped and massaged samples of TV broadcasts and commercials underneath his synth bed. A lot of these tracks, especially the opener “Andro” and “Power of Persuasion,” have the warped and burnt sound of electronica legends Boards of Canada—specifically, you might recognize this one horn sound; it’s wispy, regretful, and hazy. But unlike so many of his naïve peers, Lopatin’s record is not another ignominious brick in the lo-fi wall. Replica has gorgeous, lush, and sharply clear production that allows his analog sounds room to breathe beyond simple crackle and grain. This record is mentholated, and winter fresh.

Lopatin succeeds where other highbrow and high-minded experimental artists have faltered, in that he actually has a sense of humor. I’d describe his sensibility as “art bro”—read the 0PN Twitter to fully get that gist. Replica is no apocalyptic arpeggio sermon, nor a shallow chillwave blurt—it’s the sound of some kind of American future, where businessmen drink cocktails with their mistresses in moon bars and hovercar home to watch Step Brothers on the holoscreen. There’s a refreshing goofiness to these songs, but the album still has the heft of a Geogaddi or Music Has the Right to Children. It’s like when you listen to Aphex Twin, you can sort of see Richard James’ grin growing devilishly wide; with Replica, Lopatin’s riding in cruise control, eating a Twinkie and smoking a cigarette, making a convincing case that he’s the most interesting electronic artist out there now.