The Pains Of Being Pure At Heart's latest album, Belong, is nothing but a boring, bland My Bloody Valentine ripoff. 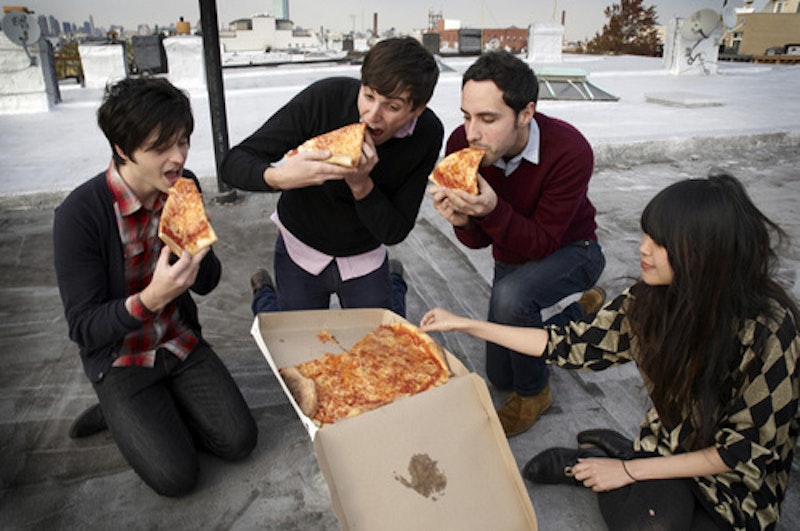 When did indie rock become so limp? Big mainstream rock acts may be dead for now, but who thought it would be cool to sound like a hipster version of Train? Belong, the second record by The Pains of Being Pure at Heart, is equal parts navel-gazing and utterly bland songwriting. Two chords, a woozy and warm guitar tone, a steady beat, and textural, androgynous vocals—it's a shitty Loveless. There's supposed to be some legitimacy to the record due to the production by Flood and Alan Moulder, the team that most notably worked on The Smashing Pumpkins' Mellon Collie and the Infinite Sadness. I was eager to see if TPOBPAH (that name is self-parody) might actually pull off a record as ferocious and titanic as Mellon Collie or Siamese Dream.

Not even close. This is an anonymous, completely forgettable record, a poorly executed hodgepodge of ideas by bands way beyond the Pains' ability. Bands like this are everywhere, but it's troubling to see such blatant plastics being praised by a site as influential as Pitchfork. Ian Cohen had this to say:

The first three tracks on Belong—the title track, 'Heaven's Gonna Happen Now,' and "Heart in Your Heartbreak"—make up the strongest run the Pains have put together. That's in large part because, while they feature the seamless verse-chorus-bridge transitions the debut had in spades, they sound like actual 90s alt-rock radio hits. The Pains of Being Pure at Heart wasn't as lo-fi as it was often made out to be, but it didn't allow for the thrilling deluges of fuzz or the punchy clarity on this opening trio of tracks. Later, Pains nudge themselves slightly out of their comfort zone, replicating the motorbike roar of JAMC on "Girl of 1,000 Dreams" or the bliss of My Bloody Valentine on 'Strange.'
Carbon-copying popular bands from 15 years ago is all it takes to be considered today's "Best New Music." Everyone has their heroes, but what good artists do is bring together disparate influences to create something new. Since Cohen considers Belong "bigger, bolder, and brighter," I'll take the bait and make the obvious comparison to Billy Corgan's band and its monolithic first three albums. The Smashing Pumpkins were without a doubt the most technically skilled and musically interesting big deal band of the 1990s, and you can't even begin to approach what they did if you're half-assing it. TPOBPAH are boring: you can easily imagine them fingering their MacBooks in a Brooklyn coffee shop, all cute and awkward. There's no excitement in this band, and there's no power in their utterly flat music.