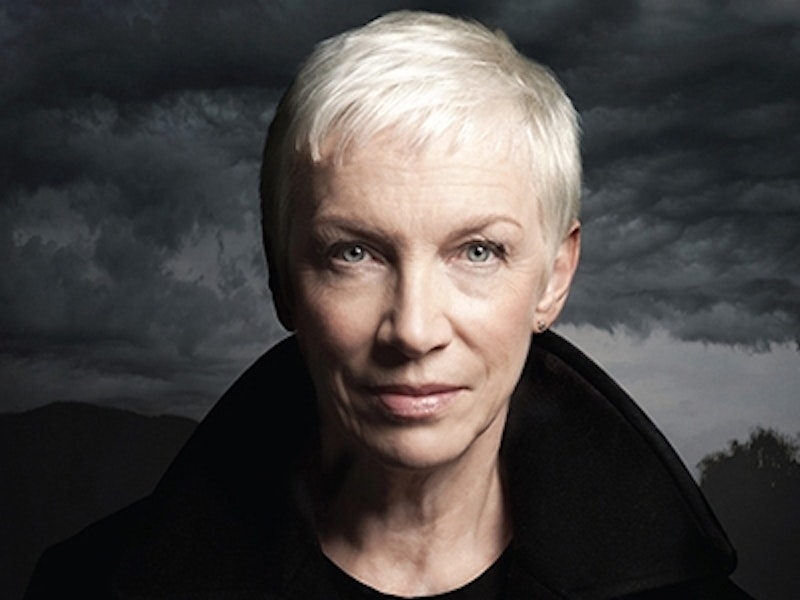 Are there some songs white people shouldn't sing? Annie Lennox makes a good case that there are. In an interview about her recent album Nostalgia, Tavis Smiley asked Lennox what "Strange Fruit" was about. The question was friendly, and the answer is fairly obvious—"Strange Fruit" is not a subtle song. But Lennox still flubbed it.

"Strange Fruit" is a protest song and it was written before the Civil Rights movement actually got on its feet, got established. And because of what I've seen around the world, I know that this theme, this subject of violence and bigotry, hatred, violent acts of mankind against ourselves. This is a theme. It's a human theme that has gone on for time immemorial. It's expressed in all kinds of different ways, whether it be racism, whether it be domestic violence, whether it be warfare, or a terrorist act, or simply one person attacking another person in a separate incident. This is something that we as human beings have to deal with, it's just going on 24/7.

For Lennox, lynching, a specific historical form of terrorism targeted at black people, becomes a universal human theme—"one person attacking another person in a separate incident." It's as if she's afraid to say "lynching"; to be important or meaningful, the song has to be about something other than what it's obviously about. She wants the song to be about her, when the whole point of "Strange Fruit" is that some violence is not universal, but is targeted at particular people because of the color of their skin. When Smiley presses Lennox a bit, she only spirals further into incoherence, babbling about how she and Billie Holiday could have talked about women's rights and lipstick. You wish, Annie.

Lennox's performance of the song is in line with her clueless explication.

Without a trace of irony, she treats the song like she's at the 50-yard line belting out the national anthem—all soaring drama and virtuoso grandstanding. She hits "southern breeze" like it's a triumphant declaration. The classical backing doesn't help matters, as the high art seriousness just adds to the sense that the song is about Lennox singing powerfully and seriously, rather than about black people viciously murdered.

Admittedly, part of this is a problem with the song itself. I've never been a huge fan of "Strange Fruit." It's not a surprise to discover it was written by a white man—Communist Jewish schoolteacher Abel Meeropol. Lennox's aim-for-the-rafters style emphasizes the gothic bombast, but that’s is in the original lyrics—the piled-on gore threatens to turn actual suffering into genre pleasure masquerading as high-minded social protest.

Still whatever the songs weaknesses, it's hard to argue with Holiday's interpretation.

In comparison to Lennox's, Holiday's voice is a slow, unsteady croak—but she uses that to her advantage. With only piano backing, she reads through the lyrics slowly, as if she doesn't want to get to the next line. Lennox sounds like she's watching death from a comfortable movie theater, but Holiday gives an on-the-scene report; when she says "bulging" she sounds like she's going to vomit. It's a bitter, agonizing performance, and one that is definitively based on identification, personal horror and fear. Meeropol's lyrics use the literary gothic as a distancing tactic, but Holiday's version is explicitly about a black woman confronting violence against black people.

It's hard to imagine how a white person could sing the song in this way.

White people have tried, without much success. I love the Cocteau Twins, but their effort to turn "Strange Fruit" into a horror movie soundtrack is badly misguided. Tori Amos' breathy, mannered version is indebted to Holiday, but that just makes her version seem like a crass imitation. Siouxsie and the Banshees try to make the song into a Kurt Weill-esque cabaret number, a move that cleverly emphasizes the song's theatricality while not-so-cleverly revealing its weaknesses. Turning lynching into a fabulous artificial goth fest is not ideal.

There is one version by a white artist that works.

Like Holiday's, Robert Wyatt's version is slow and the backing is relatively sparse. But where Holiday seems to feel, and makes you feel, each word as a separate blow, Wyatt's reading is uninflected, in the tradition of keening British folk. If Holiday's take is about her closeness to the atrocities, Wyatt's seems to be about his distance. He isn't flagrantly performing like Lennox or Siouxsie; he's just eerily uninvolved. The song isn't about him; the death isn't his. Lennox belts out someone else's pain; Wyatt's presents empathy as less accessible. Instead of a triumph of universal understanding, Wyatt's version comes off as a bleak parable about the limits of what white people can care about.

So, yes, a white person can sing "Strange Fruit." That doesn't mean that the race of the singer is irrelevant, though. Rather, the most successful versions of the song acknowledge, and think about, the singer's relationship to skin color and violence based on skin color. "Strange Fruit" isn't about "one person attacking another person." It's about lynching and racism. You need to acknowledge that to sing it well.