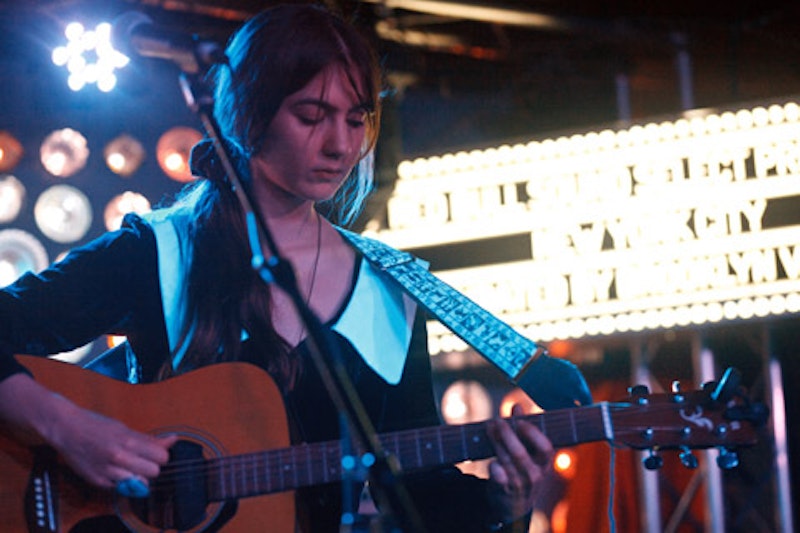 Anastasia Vronski, “Spider In My Head”

Brill’s Content-style disclosure: one of my tracks turns up on the same compilation album as “Spider In My Head.” But it’s also worth noting that this Anastasia Vronski number is gnarlier, tuneful and considerably more musical. At its core are a dog-eared electric blues riff and a corresponding blare of purplish distortion—each threatening to overwhelm the other—with half-asleep drums keeping time. A curtain of noise rises and falls as appropriate. The effect is sort of like an outtake of a Smashing Pumpkins deep cut where there’s no singing, where the band just forgot that the tape was rolling and grooved out on the exceptional, singular nature of the lifeblood pump-pump-pumping through the song’s veins. There are moments, when the guitars lean away from the melody, where “Spider” actually seems to be melting before our very ears.

Surfacing late on The Innocents, “Montrose” functions as a palate cleanser of sorts, a breather from Natalie Mering’s madrigal folk-rock bolts. I prefer it to the rest of the album, which to these ears wasn’t quite weird enough—I keep waiting for these songs to suddenly go nova or photonegative, flipping the warbling troubadour conceit on its head and mildly traumatizing anyone for whom this is manna. “Montrose” comes close enough, a self-cannibalizing detour of double-rainbow synthesizers that glows and glops and ripples like a science fair volcano where the ingredients weren’t quite mixed right, or a Play-Doh bundt cake baking in an actual oven. Even as Mering’s fantasia fades into pedestrian field-recording noise and a sample from Out of the Past, that welcome finger-painted strangeness lingers.

The miracle of the music Liz Harris makes as Grouper is how it’s so nakedly minimal and emotionally wrecking at the same time. From last year’s The Man Who Died In His Boat and 2014’s Ruins—the two Grouper albums with which I’m intimately familiar right now—I’d be hard-pressed to recall a single lyric, but just to think of them is to immediately revisit the depths of their moods and feels, dolorous anthills of piano and guitar. “Labyrinth,” from Ruins, plays with a series of unadorned piano chords in a still space, the echo throwing the monumental sadness of said chords into sharp relief even as the repetitious theme brings to mind, say, Big Ben booming infinitely and eerily off-rhythm in a depopulated London. Harris recorded the song during a blackout, and her microwave bleeping back to life seconds before the finale is the cherry atop this particular sundae; so sudden and piercing is the bleep that, even after 10 or 20 go’rounds with “Labyrinth,” it’ll still have the hair on the back of your neck standing up.