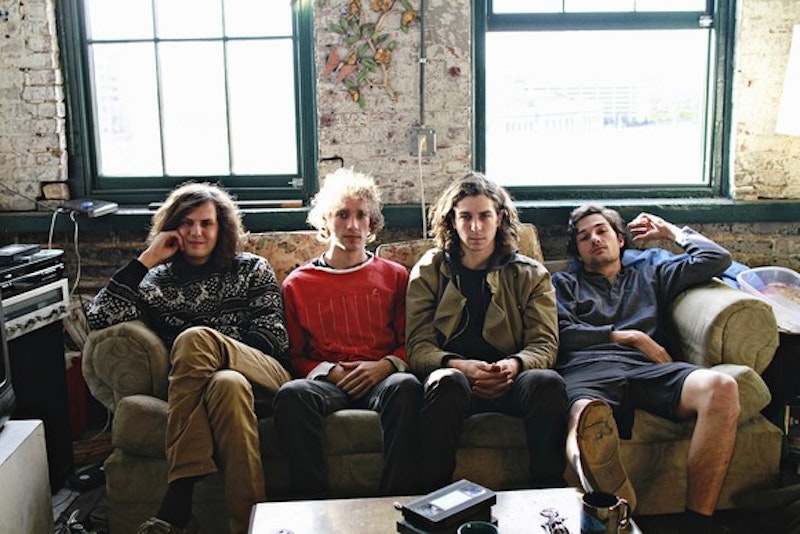 Sometimes writing about rock music is hard because there’s nothing left to say. Without a cult of personality, scandal or any swollen gimmicks, the media pays less attention, and empty words are written—promo and review—that end up looking like a bloated RIYL list. This is the obvious move for someone at a loss for words, because historically, imitation brand sells. Bands that deserve it and bands that don’t sometimes get stuck with these comparisons for their entire careers, even based on a single element that’s an easy touch-point like the voice. But when a band has hundreds of influences and you’ve never seen or met them, haven’t seen where their music has come from, and are pressed on deadline, it’s very easy to just pick an era and compare just so everyone goes home happy except the band. Lots of times a band will get stuck with one or two pejorative comparisons, but Dope Body get almost everyone and everything, and lately, mostly groups of the nu metal and post hardcore variety. The fact is, the riff on “Hired Gun” on their new record Lifer, sounds just as much like Cheap Trick as Rob Zombie or Led Zeppelin or Rage Against the Machine or Drive Like Jehu, because a guitar riff like that’s never going to go away, and no one owns it.

Dope Body have never been an imitation band but they’ve come around at a bad time to play rock music, when the audience won’t move and the press can’t think of anything to say. The welcome addition on Lifer is a sense of space and a patience that wasn’t yet necessary on Nupping and Natural History. The first full track “Repo Man” is a slow burner built on a revolving bass line that winds up into the bloody nose stomp of “Hired Gun.” John Jones’ bass lines are understated and clear, and they’re what define almost every song on Lifer for me, especially the exceptional closer “Even In the End.” Zachary Utz’s glitched-out and textural guitar work continues to be the band’s most prominent insanity, running from caveman club drop D rhythm parts to steel wool and barb-covered lead lines that sound like the death throes of a baby diesel engine. Jones’ bass lines recall the band’s first record (which he didn’t appear on): Twenty-Pound Brick, a fantastic collection of liquid magma nursery rhymes and pure sludge pop. As the band has progressed, they’ve explored more of a classic rock territory and the sort of textural experiments that Utz and drummer Dave Jacober regularly work out in their instrumental duo Holy Ghost Party.

I talked to singer Andrew Laumann briefly about being compared to bands he never listened to and how serious career setbacks can come because of a lazy, tossed-off review with a score that means “never having to say you’re sorry.” “Music critics are the bane of my existence,” he says, “I don’t care if they don’t like the record, but at least explain why or ask us instead of putting down a list of references to bands none of us have ever listened to.” A recent interview had the juicy BuzzFeed-ready lead attached: “Dope Body want to make nu-metal cool.” I asked Laumann if that was taken out of context or cherry-picked. “Not really, the point was that nu-metal was the type of music that was around and available when we were all impressionable kids, so it colors what we do.” So it’s no more of a gimmick than a Generation X-er that grew up listening to Boston and Cheap Trick, and might get close to the same sound, if not as sludgy.

Laumann also speaks of frustration when his lyrics are misinterpreted, though he wavers on printing or releasing lyrics for fear that “they’ll be used against me.” The song “Toy”—written in the third person from the perspective of one of those cynical imitation bands—has been interpreted as Laumann’s thoughts. This is a problem solved only by lyric sheets or excessive explanation, like when Billy Corgan sang, “If I were dead, would my record sell?” on “Heavy Metal Machine” and was surprised when people took him at face value.

Lifer also has a calm and the bliss of the long-traveled band: reflective and moody and at times almost looking back at everywhere they’ve been. Given the recent bummer of an interview in Baltimore’s City Paper and Laumann’s declaration that if this record plateaus, the band is done, the title of the record says it all. Lifer was named almost in gallows humor as a joke about their plight as an aspiring rock band and what to do next, and was made under the impression that the band would soon be finished. If they do tie it up here, Lifer is the way to go out: clear-headed, respectful of the past, and heavy, not as in guitars but emotionally. It feels like the edge of a cliff.