Where the Buffalo Bop

On a German reissue label that specialized in pre-Beatles 1950s—musically you never know exactly what you’ll get. 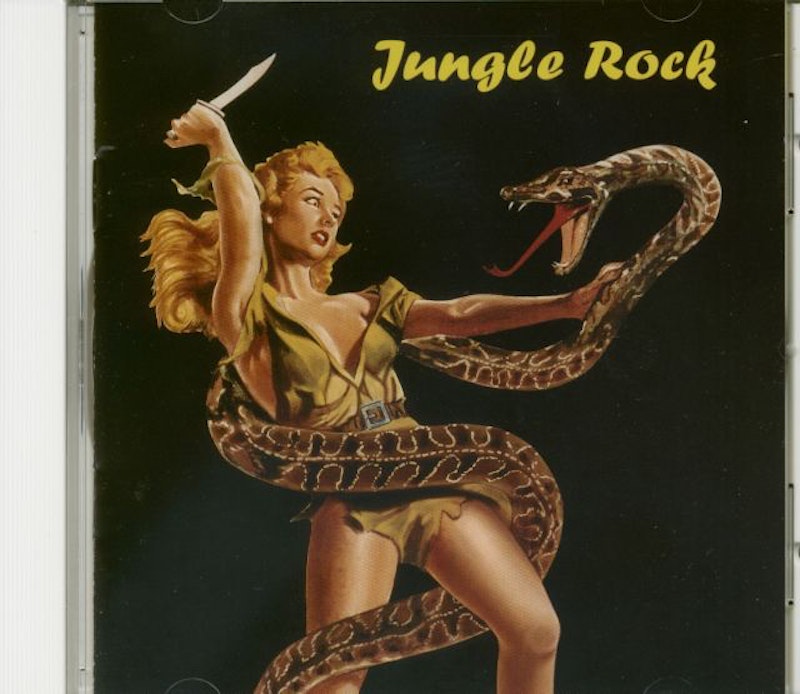 The 1950s music reissue glut is vast, so it’s impossible for all such records to be worthless. From 1979 to 2011, Germany’s Bison Bop/Buffalo Bop label released hundreds of CD and vinyl reissues of lo-fi records from the 50s. As their only focus is anything extremely obscure that came from the pre-Beatles era, musically you never know exactly what you’ll get. A complete overview of the label’s entire discography would be of questionable value, but some of these records document important pieces of the 50's music puzzle.

Buffalo Bop’s most fascinating themed release is Jungle Rock. The CD compilation spotlights anthems inspired by the pulpy jungle adventure TV shows, films, and comic books that were big in the Eisenhower era. Atonal screaming, distortion, invented languages, field recordings, and animalistic noise are dominant throughout the lengthy set. Structurally, many of the cuts here fall into the categories of rockabilly, r’ n ’b, doo-wop, and other conventional 50s styles, but even Jungle Rock’s most musically predictable songs sport imaginative witty lyrics about shamen playing rock ’n ’roll, dancing gorillas, moody tropical scenes, and such with each line more ridiculous than the next.

The standout cuts on Jungle Rock use the wacky exotica theme as a launch pad for explorations into low fidelity’s endless potential. The Noc-A-Bouts’ “Jungle Safari” is a hurricane of dissonance, thunderous organ chords, and sound effects that pushes the boundaries of instrumental rock composition with an overdriven density that would only be matched later by tracks like “Lady Godiva’s Operation” and “Murder Mystery” by The Velvet Underground, or Brick’s 1976 hit “Dazz.” The Rimfires’ “Un-Gowa” is entrenched in a similar cartoon savagery, though that tune relies more on a cavernous reverb sound to get its chaotic point across. Harold & Bob’s “Jungle Beat” is a stark musique concrete instrumental that predicts the faux soundtrack style that’d garner a cult following in the 1990s and 2000s as the signature for esoteric UK records by Movietone, High Llamas, and Spiritualized.

The Eternals are the most famous group included. This Bronx, NY quintet was a legendary Latin American doo-wop group who had a string of hits that began with “Rockin’ In The Jungle.” Like the Lincoln Chase obscurity, this song is among the disc’s most futuristic tracks. The Eternals use their smooth street corner harmony style to transpose jungle noises and birdcalls into a disorienting tapestry that entwines melody and raw sonic texture. Throw in the pulsating rhythm of hand drums and maracas and a squawking sax solo and you’ve got a symphony of clutter and sophistication that answers the question ”What if Animal Collective came out in 1958?”

Other Jungle Rock highlights include the proto-psychedelia of Jack Rodgers’ “Taheene,” one of the few 1950s rock cuts to feature the warbly/stoned out sound of a flanged guitar; and Bo & Jo And The Nite Riders’ drunken Latin r’ n ’b blaster “Jungle Rock”, a slag heap of barely existent melodies and rhythms that makes late-70s no wave seem like smooth jazz.