Inheritance is dead on arrival. D 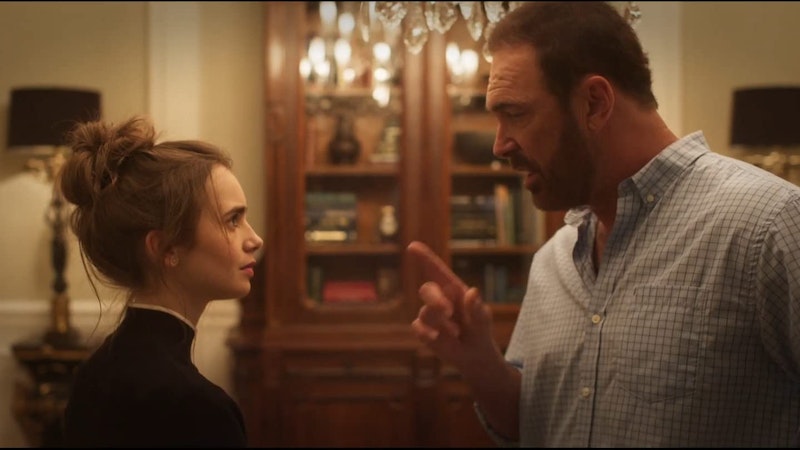 A lot of the best pop culture of the last few years has dealt with extremely wealthy families, and the younger members coming to terms with their place in them, especially when faced with the illness, death or fall from grace of the family patriarch. That's what Arrested Development, Succession and Knives Out, were about.

Inheritance is one of the weakest entries in this sub-genre. It's a lackluster, ridiculous and poorly-acted thriller plagued by numerous red herrings. It dips its toes into various subjects, from politics to sexual assault, about which it has nothing to say. And while the first two acts are ridiculous enough, the finale is one long exposition dump that owes a debt to Roger Ebert's old Fallacy of the Talking Killer.

Directed by Vaughn Stein, whose last film was the forgettable Margot Robbie thriller Terminal, Inheritance stars Lily Collins as Lauren, who’s the current Manhattan District Attorney, even though she looks like she's about 23 years old. As established in an opening montage that resembles the "previously seen on" section on a network cop procedural, we learn Lauren’s preparing for a big trial, while her brother (Gossip Girl alum Chace Crawford) is running for Congress. And before this montage is over, their wealthy dad (Patrick Warburton) is dead of a heart attack.

The plot concerns Lauren slowly becoming aware of extensive misdeeds from throughout the life of their father, including financial shenanigans, a mistress and out-of-wedlock child, and a long-buried car accident. Borrowing a page from Parasite, there's also a guy secretly living in an underground bunker. This is Morgan (Simon Pegg), a man with a mysterious connection to the dead billionaire, who's been kept chained underground for decades. The latter half of the film hinges on the question of who Morgan is and what he has to do with this family.

It's silly, and never quite clear what the stakes are. Is Lauren going to come to terms with the ill-gotten gains of her family's wealth? Will she have to make a choice between doing justice and protecting her family? On the latter question, the film not only punts, but doesn't even raise the question.

While Pegg has his moments in a role that allows him to stretch, neither Connie Nielsen (as Lauren's mother) or Michael Beach (as a family attorney) are given much to do, and in the larger roles, it's clear that neither Collins nor Crawford is up to the heft that these parts should provide. The writing isn't great either. There's nothing about the plot that makes it necessary for Collins' character to be a prodigy district attorney, nor does her status as a wife and mother figure much in the plot. It's also made clear, in flashbacks, that Lauren’s the liberal do-gooder of the family and her father disapproves of her choice to become a civil servant who wants to help the downtrodden. So, she became… a prosecutor?

The other big misstep is that the patriarch character, in this type of movie, should loom large. Instead, in Inheritance the paterfamilias barely appears, aside from the death scene and a couple of brief flashbacks. Also, he's played by Puddy from Seinfeld (Warburton), a talented performer who's also given just about nothing to work with here.

Inheritance was supposed to debut at Tribeca this year, but since that festival didn't happen it comes to VOD this week. In whatever the format, this one was dead on arrival all along.