Steely Dan in the most perfect context: a gaudy waterfront flanked by yachts and luxury hotels. 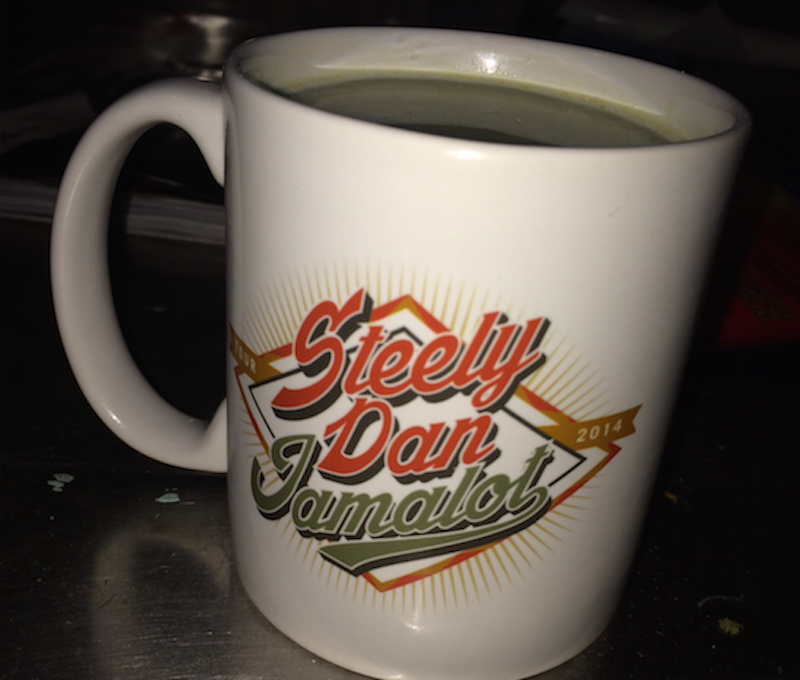 Steely Dan is not an oldies act. It’s not yesterday’s music, or “our music,” as a late middle-aged woman told my friend in the bathroom: “Wow! You like our music!” Put on your geek glasses—Steely Dan is not a rock band, it’s a concept. Walter Becker and Donald Fagen barely played on their own records, they just wrote and directed the music. Their age (Becker is 64, Fagen is 66) doesn’t hinder their ability to play Steely Dan music because they never played it in the first place. Fagen’s voice? He’s fine—in tune and not out of breath like many other Boomer-beloved classic rockers touring every summer shredding their songs into little pieces and all the money they made from the people that came. Fagen doesn’t short-sing like Dylan and change the phrasing, enunciation, or melody of his lyrics—it’s the same as the record. They have an amazing band that can reproduce the character of their music, play the sorts of sets Becker & Fagen want to do, and are ready for every whim.

Musicians and bands are no longer tied exclusively to the generations they came up in. Boomers have a lame and lazy automatic stance on popular musicians past 40, a tailbone of the 1960s: live fast, die young, because once you’re old, yer shit. It doesn’t apply anymore, if it ever did. Does anyone bitch about Jandek getting on stage? Of course not. Steely Dan is easy to shit on if you’re not paying attention, if you think that Steely Dan is one dude of the same name. I love their music, and they sound excellent live. If you don’t dig their music, I understand, but I don’t know what to tell you. $45 for a lawn ticket is not a rip-off, considering the size of the band (at least a dozen), and the quality of their performance.

God the sound was good at Baltimore’s Pier Six Wednesday night. My friend and I had never been, and I was expecting a Merriweather-style situation where if you’re on the lawn, you’re going to be looking at a screen the whole show. At the very back of the much smaller Pier Six, we could see the stage fine, ants as they were, but the sight was spectacular, and couldn’t have been more appropriate for songs like “Hey Nineteen,” “FM (No Static At All),” and “Time Out of Mind.” After making more trips to the bathroom, we walked out across the dock to a sped-up and pitch-perfect “Black Cow,” followed by “Aja,” where Fagen played a sarcastic, chintzy melodica for the main melody in the middle (“di-din-din-din-din-din-di-din-di-din-din-din-din-din”) that sounds so cutting on the record.

I was disappointed that the set list leaned heavily on the first half of their career, the rock albums: “Bodhisattva” finally sounded heavy to me and it made sense, the rest is, in my opinion, so insubstantial compared to the weirder, darker, and more obsessive second half of their career, especially Gaucho and The Royal Scam, which both got relative short shrift (no “Babylon Sisters” or “Green Earrings” was a severe drag). “My Old School,” “Razor Boy,” and “Show Biz Kids” were weak and the wank was annoying, while the wank was wonderful on songs like “Josie” and “Home at Last.” They played most of Aja—no “Deacon Blues” or “I Got the News,” but what really sucked was the absence of some Gaucho.

The setting was perfect: creepy and insane people of all ages smoking and doing drugs and getting drunk on the dock of the bay, while hundreds of people watched from across the harbor and on the roof of the Marriott. Men with cigars and gold chains were watching stage right from their yachts. There isn’t a better soundtrack to that scene than “Babylon Sisters”: digging your head in the steering wheel at the end of the road. I have faith Becker and Fagen want to tour again (they haven’t ruled out a new record either), but who knows? One of them could die in the two-three year interim, and even though most the “band” would still be able to play, the concept of Steely Dan would be dead forever. So hope against hope I get to see them again, at Pier Six, to soak in the sight of thousands of middle-aged men and women and a half-dozen kids smoking, drinking $12 beers and swaying awkwardly to songs about hatred, nastiness, loneliness, drugs, bitterness, bad sex, and bad behavior. This is my kind of band! I even bought a coffee mug.