Tricycle-bound African geriatrics, a young musical prodigy, and a message of peace. What more could you need? 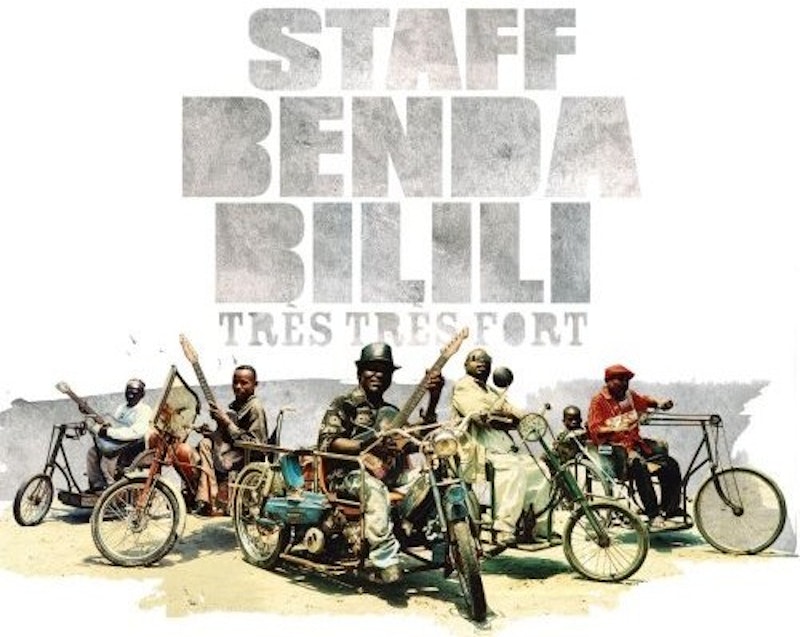 The story of Staff Benda Bilili is so peculiar and far-fetched it would be impossible to invent it: A group of elderly, paraplegic musicians who live on the grounds of the local zoological park in Kinshasa, Congo join up with young percussionists and a kid from the streets who plays a sort of electric lute made out of a tin can. Together they play an intoxicating mix of roots-rumba, folk, and psychedelic funk, while delivering a message of hope and perseverance. I'll give you a second to wrap your head around that.

For such strange origins, the creation and driving force behind Staff Benda Bilili is rather logical. The territory surrounding the Kinshasa zoo is home to many shégés (street kids) and squatters, including the four elder members of the band who are looked at as protectors of the neighborhood. Music plays several roles for The Staff. First, it provides a wholesome activity that unifies the community, while preventing the kids from engaging in more dangerous undertakings. But additionally, it's their way out of the slums. Even at their age, The Staff still dreams of traveling abroad and finding happiness. They recognize that they have a limited amount of time to pass on their legacy, one that they hope young Roger Landou will carry forward. Four years ago, they were playing downtown and begging for money. Now, on the heels of their beautiful debut album Très Très Fort, which was produced by Vincent Kenis (the man who introduced us to Konono No.1), and a documentary that follows them for the past four tumultuous years, the band is set to begin a European tour.

The lyrics (from what's been translated) are largely comprised of life lessons and earnest pleas of understanding. “Benda Bilili” literally means, "look beyond appearances" in Lingala, one of the four national languages of the Democratic Republic of Congo. Other songs offer advice to people living in the streets or honor the late, great James Brown. The song “Polio” calls on parents to get their kids vaccinated. I don't want to understate the breadth of the band's musical message, but there's something oddly refreshing about the straightforwardness of this project. Here are four handicapped men writing songs about overcoming prejudice and judgment. The message is even in their band name. It's somewhat reminiscent of Amadou and Mariam singing about how love goes deeper than appearance. When they write a cautionary love song they call it “Je Te Kiffe,” which means “I Dig You” or “I Love You.” Likewise, when Staff Benda Bilili writes about love, they keep it simple: “Je t'aime.”

The instrumentation, however, is more complex. Sometimes the sound is straight rhythm and blues culled from the banks of the Mississippi, like on the number “Sala Mosala.” “Avramandole” takes on a call-and-response structure, but the heavy percussion and Landu's wailing satonge make the track a frenetic dancefloor burner. “Moto Moindo” recalls the salsa blues of Guinean artist Amara Touré while evoking images of a group mourning with a Latin groove.

Roger Landu's satonge is on full display at the very end of Staff Benda Bilili. The instrument produces a twangy timbre that sounds meandering at first but settles nicely over the tight beats and folk guitar. When Landu speeds up, the sound of his satonge takes on a more human tone. I can't say the bizarre, single-string object instantly mesmerized me, nor did it strike my curiosity as powerfully as the first time I heard a likembe. The instrument has a chameleon-like capacity to change forms. One minute it sounds like a tinny slide guitar, the next minute a banjo, or sometimes it’s just unlike anything you've ever heard before. I give it two weeks before Steve Shehan posts a video of his own version.

Staff Benda Bilili might come from improbable circumstances but their music is warm, familiar, and a clear product of Congo's diverse musical history. Caribbean rhythms mix with traditional folk, rumba, and pure funk. It all makes for a potent combination and an extremely rich and eclectic sound. The fact that the band is composed of four men who drive tricked-out tricycles and a teenager who invented his own instrument is an added bonus to pique your interest. The band professes on their album that you should look beyond the surface and really listen to the music. While they have a point, it doesn't mean you can't take a quick glance at their seriously dope bikes and enjoy the music at the same time.