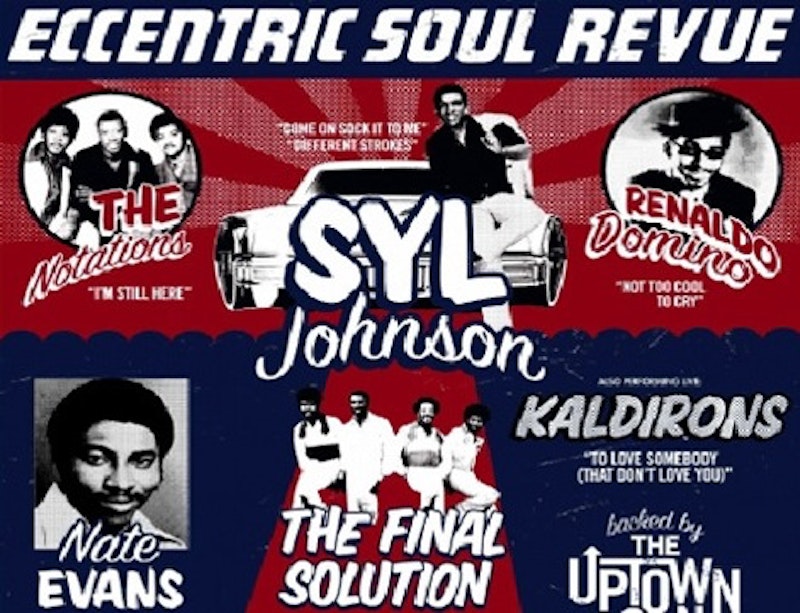 If you are a part of that great mass of humanity that did not spend last Saturday evening attending Numero's First Annual Eccentric Soul Revue, all I can do is offer my sympathies. Whatever activity you were unlucky enough to be doing in lieu of watching the standouts of the famed Twinight Label perform together for the first time in over three decades, it simply could not hold a candle to the soul explosion that rocked the Windy City between 9:00 and 12:00 p.m.

Music lovers across the world have long turned our pocket money over to purchase the shiny nuggets of aural exceptionalism that Numero digs out and polishes up eight or 10 times a year. Famed for their excavation of unjustly forgotten soul and funk, the astonishing beauty of the packaging and a stringent respect for copyright laws (the last as irregular in the re-issue business as the first two) Numero has steadily spent the last half-decade building a reputation as one of the most consistently stellar record labels around.

And yet, a nagging fear gnawed at me as I wondered into the Park West Auditorium. The core of the Eccentric Soul collection are the many talented artists who, but for lack of a lucky break, would have gone on to see their names in lights and their songs immortalized in the popular canon. So those of us who have spent many a pleasant hour grooving to lost 45s and staring at the smiling black and white photos of trim, youthful men and women were forced to wonder: had time dulled the once razor-sharp chops of these almost-superstars? Could the aged virtuosos still bring the heat, or would their showcase more closely resemble an awkward meeting with your ex? In short, did these lost scions of soul still have it?

Logistical difficulties kept a large pack of funk aficionados waiting in the chilly Chicago air, and when we entered the venue the opening set by the Kaldirons had tragically concluded. Our first exposure to the revue therefore began with the Uptown Sound, a native Chicago outfit that, accompanied by a small brass and string section, doubled as a perfect backing band for the artists throughout the evening. From the opening strands of bass to the final burst of horns, they didn't miss a note or a trick, demonstrating a level of professional excellence I have rarely seen equaled in concert.

The evening continued with the one-two punch of Renaldo Domino and Nate Evans, both Twinight performers who were never given their just due. Nate Evans in particular stood out as a rare talent and exceptional showman. In a blistering 15-minute set culminating in his singles "Main Squeeze" and "Pardon My Innocent Heart," Evans displayed that rare combination of Northern Soul polish and Deep Soul intensity which makes it hard to understand why it took a revival to bring him back to the spotlight.

Throughout the evening the MC duties were handled by JC Brooks, the frontman for the aforementioned Uptown Sound, who also filled in as a back-up singer and even dropped a few originals on an enthralled crowd. Clad in a black snakeskin shirt and filled with all the energy of a born entertainer, Brooks executed his tasks with an excellence and alacrity that were truly astonishing. I can’t remember a performance that ran with such efficiency.

After one of the Uptown Sound's own numbers, four aged gentleman in robin's egg blue suits and perfectly coiffed (if thinning) manes took the stage, revealing themselves to be the Notations, famously playing music for over four decades. The Notations are slower in tempo and less intense than some of the other groups, more closely resembling Motown than Stax, and that style tends not to age as well as a grittier sound. But, if their vocals were not quite what on par with the originals, recorded some 35 years ago, it was only by a shade, and their climactic Sam Cooke medley ("Saturday Night" into "Everybody Loves to Cha Cha Cha") was a display of harmonic perfection impressive from artists in our out of their prime.

Contra the barbershop perfection of the Notations, Syl Johnson met the crowd with an ill-set tie and shirttails hanging out the back of his tailored suit, looking for all the world more like an unkempt high-school science teacher than one of the greatest soul artists of all time. Also unlike the Notations, Syl Johnson came on stage more thoroughly plastered than a fresco. But, if his recent drinks were evident from his dress, dialogue and comportment, his chops were stone-cold sober. With a voice like cask-aged whiskey and more energy then men half his age, Johnson proceeded through a quick set of some of his Twinight classics before leaving us with steaming versions of his two most famous hits, "Is it Because I'm Black" and "Diff'rent Strokes." In contrast to some of the other performers, Syl has had a long if somewhat rocky career as a performer, and it showed in the naturalness of his demeanor. His audience patter was as irregular as it was engaging (particularly during the portion of the evening when he gave a nod to Kid Rock and Wu-Tang for being the only producers who had paid sampling fees) and his brief display on the harmonica gave ample evidence of his wide range of talents.

Johnson's performance was a stirring capstone to the hectic, breakneck display we had been witness to. For those of us in the audience for whom live music traditionally has meant indie-rock detachment or the faux-gangsta poses of freestyling MCs, seeing a collection of master musicians wholeheartedly embrace the performing aspect of live music—getting up, getting down, reaching towards the masses of screaming women and generally encouraging us all to shake parts of the body not generally shook in polite society—was a unique experience in and of itself. I find it difficult to imagine that many exited the Eccentric Soul Revue with anything but unbridled appreciation for the performances by the assembled groups and the clockwork perfection of the organizers, by which it was possible to see a half-dozen acts in under three hours. Lord willing, the First Annual Eccentric Soul Revue will be the first of many. Who knows? Next spring I might be sitting down to write a paean to Bill Moss in Cleveland, or Lord Rhaburn in Belize. The mind can dream, after all.