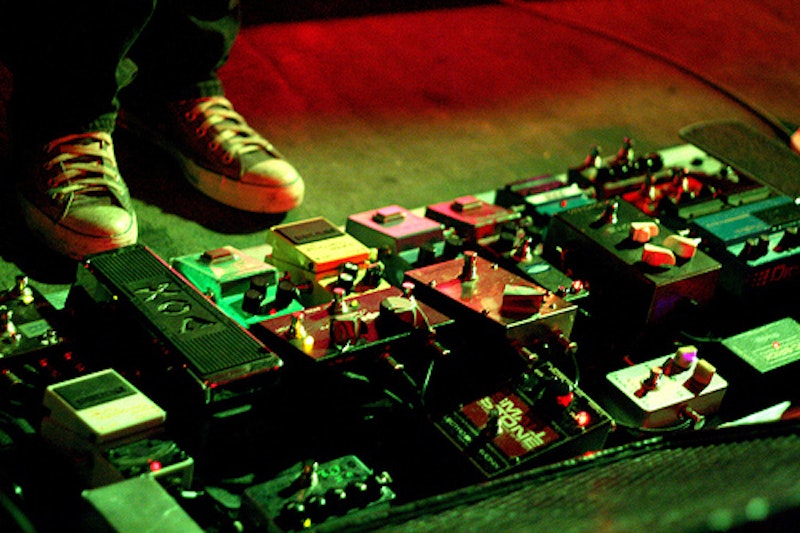 WooOooooOooooOooooO. We’re going back in time. It’s 1969. Flower Power, everyone sounds like an even more stoned version of Blind Melon’s “No Rain.” The squares tell you to wear flowers in your hair in San Francisco. It’s 1984: there’s Prince, and a million sub-Princes building fiefdoms of shiny purple synth music. 1995, and 16-year-olds with guitars one part molasses one part broken glass and bad haircuts from mom, in the worst way, are riding that wave into livable mediocrity. Ultimately, bands like Paul Revere & the Raiders, Wham, and Silverchair are forgotten, but the pattern of a handful of innovative and interesting artists spawning countless imitators that might have a grasp of the vibe or atmosphere but none of the songs or skill to pull it off, remains strong today. The question is, what are the guppies feeding off?

Ten, fifteen years ago, the ubiquity of two guitar/bass/drums bands made rock anemic, and it’s arguably still on life support today. The great bands were few and far between, drowning in a sea of less than capable offspring. This phenomenon is what ends eras, out of boredom, diminishing returns, and lack of attention. The most aped sound of the 2000s is easy: Animal Collective. Before Feels came out and their influence mushroomed, it was still jagged, well-dressed post punk. Bloc Party, Editors, came to copy Interpol and the Yeah Yeah Yeahs. Ever since 2007 or so, Animal Collective’s influence on amateur indie musicians has become near-universal. Everyone either has an SP-404 or a purple DigiTech effects box, and everyone sings through cheesecloth delay, everything’s gauzy, pretty, and unassuming. None of their darkness gets translated. A group like the Ruby Suns is a perfect example of the typical AC rip-off: cascading, washed out, and “gorgeous” samples backed by wordless vocals.

I received two cassettes in the mail this week that unfortunately fall straight into this bin, lazy 10 percent attempts at making music that show only mindlessness and total anonymity. I won’t name names because I feel bad killing spiders in the shower. And it’s not personal—odds are these guys are perfectly nice upstanders that just happen to make awful, middle of the road garbage that does no one any good. I’ve met plenty of them. It’s the sound of our era: all crappy synths, twee underdeveloped melodies, poor performance, and a defensive sheen of “We’re not really that serious about this, so you can’t complain if it sucks,” which it does. There’s nothing unique, provocative, or original in any of these tunes. It’s the sound of roommates getting stoned and recording 20 minutes worth of material in as many minutes in between beers and bong hits. It’s music as recreation, something to do with friends. The artwork and song titles are similarly coy and clever in a way that assures us that nothing lies beneath the surface; nothing is worn on their sleeves or put on the table that would leave them emotionally vulnerable. Every era has its imitators and its easy-to-imitate sound. The pattern remains, but no one should pay attention.