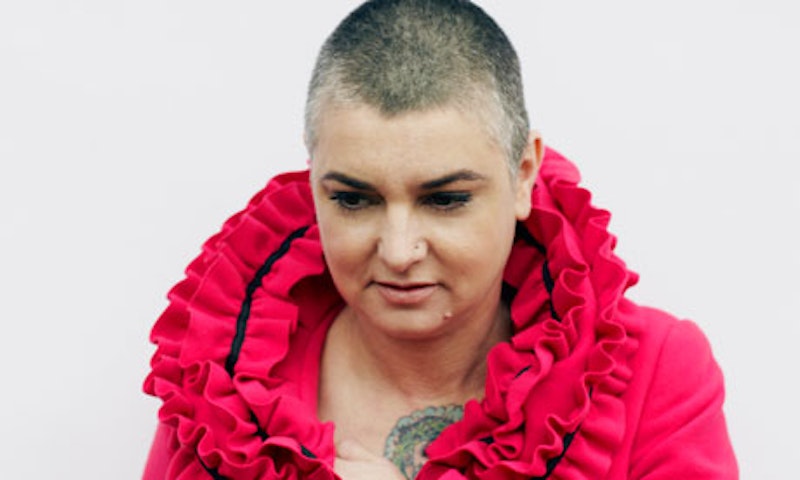 I had some of my most gloppily transcendent musical moments listening to Sinead O'Connor's song "The Emperor's New Clothes" back in college in the 1990s. That big swelling shoegaze-meets-pop sound, that sweet sexy-harsh accented voice, those unabashedly drama-queen lyrics — "I will live by my own policies/I will sleep with a clear conscience/I will sleep in peace." I was 20 years old, stuffed to the top of my bad haircut with hormones and self-pity, listening to that song upside-down on a couch in a flat on my London study abroad program, and I loved it like burning.

All of which is, yes, somewhat embarrassing. Though, to be honest, I still like that song, albeit at more of a distance. What's pop for, after all, if not gloppy transcendence? "The Emperor's New Clothes" is a giant, gooey, sparkling bolus of self-involved schmaltz — Celine Dion for do-gooding liberal college kids. And while I'm not a do-gooding liberal college kid anymore, I've still got enough hormones and self-pity around here somewhere that the song resonates.  I just listened to it about eight times on the interwebs. Again, embarrassing, but what can you do?

Even if I haven't entirely moved on, it's a little disorienting to discover the extent to which O'Connor hasn't either. Her latest album, How About I Be Me (And You Be You)  sounds like it could have been recorded back in her glory days. This is good news for fans— but it's also more than a little weird. The opener, "4th and Vine," for example, is an unabashedly romantic sweet nothing — "Gonna put my pink dress on/and do my hair up tight/gonna put some eyeliner on/gonna look real nice…gonna marry my love/and we'll be happy for all time."  It's cute….but not exactly what you expect to be coming out of the mouth of a 45-year-old. I keep listening to it and thinking, "Is she being ironic? There's irony there, right?" Maybe there is, but I sure can't hear it.

"Queen of Denmark" makes more concessions to age, perhaps. "I wanted to change the world, but I could not even change my underwear," she sings softly against a sparse (for her) background, and then complains about a receding hairline and receding self-confidence. But as she goes on she ends up talking about how much she wants sex, and then she's lamenting that she doesn't know what to want from the world, and then she's screaming against soaring aggro music…in short, it's all horny yearning and rapidly oscillating angst. If she got out of her teens alive, you couldn't tell it from this.

I'm sure a lot of people miss the passion, the horniness, and even the angst they had when they were teens. I probably do myself; I still like Sinead O'Connor, after all, and I don't think you can do that without having at least some nostalgia for your inner romantic wailer.  But overall, I have to say, being old and settled and boring feels pretty comfortable…especially when you look at what the eternally young O'Connor is doing with her life. Last year she wrote a bunch of blog posts announcing to the world how much she wanted sex and asking someone, anyone to apply to help her out. Since she's a rock star and an international sex symbol and, for that matter, a woman with a pulse, she had lots of takers, and duly met some dude. They married then separated 17 days later. Now they're back together, I guess — those crazy kids, I think they're going to make it.

Life and art don't necessarily have anything to do with each other, of course, and it's not like O'Connor's personal life is a shambles because her musical themes have stayed the same for 20+ years. Still, those themes are what they are: big emotions, big drama, spiritual/sexual crisis and catharsis. It's a fun place to visit, but I'm glad I don't live there anymore.