Beyonce's newest album is full of her typical bluster, but not much substance. 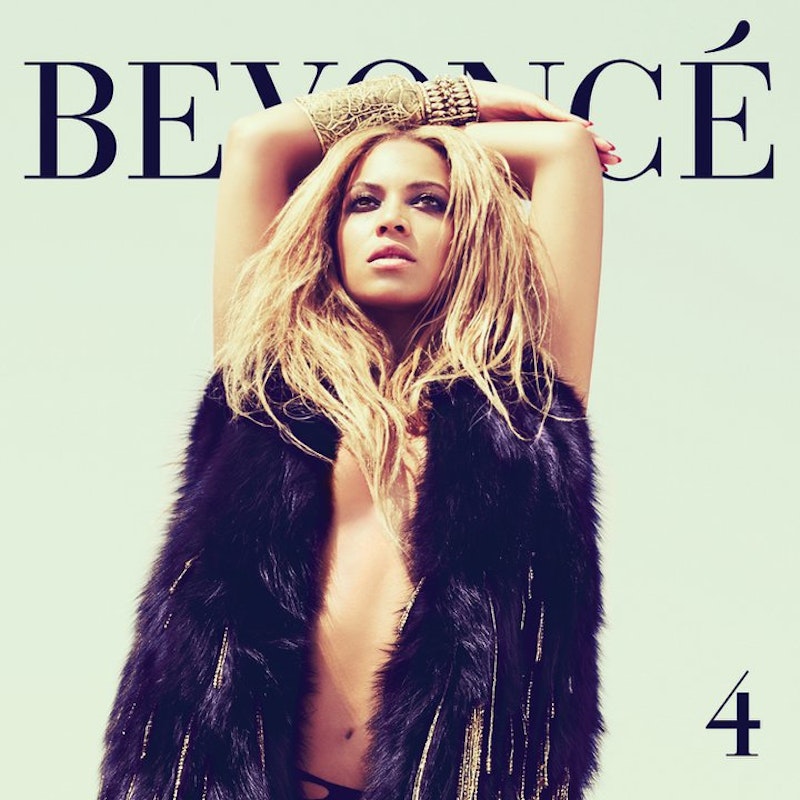 “I Was Here” off Beyonce’s latest album, 4, is one of those songs that makes you re-evaluate an artist’s entire oeuvre in light of the capacious bucket of liquid feces that has just been upended on your noggin.

Not that Beyonce hasn’t spawned crap before… and crap of similar provenance. She’s always had a weak spot for surly self-vaunting, reaching perhaps its apex in 2001’s “Survivor,” a song devoted largely to taunting the two women she’d forced out of her band. Still, crass as it was,  “Survivor” at least had a hook. “I Was Here,” on the other hand, brings all the self-absorption and none of the pop smarts. Beyonce takes a deep breath and belches out barrels of Broadway glop, enthusing over her own career success with unembarrassed egotism and Hallmark card triteness. (“I want to leave my footprints on the sands of time…want to leave something to remember so they won’t forget.”) Moving into her second decade of mega-success, Beyonce is proud to let us know that she’s got absolutely nothing to talk about except how cool it is to be mega-successful. She makes her mirror look deep.

In fairness, this has always been a big part of Beyonce’s appeal. Male rock and rap stars are notorious narcissistic assholes, but female performers, from Madonna on down, tended to seduce their listeners with at least as much vulnerability as swagger. Beyonce, though, was all about the girl power put-down; from “Bills, Bills, Bills” through “Irreplaceable” through “Single Ladies,”  Ms. Knowles never pleads when she can sneer instead. Her message isn’t so much “I Will Survive” as it is “Fuck. You.”

As rock and rap have shown, “fuck you” is a pretty popular slogan, and Beyonce has certainly opened the way for women in pop R&B to be bigger jerks. It’s hard to imagine how we would have gotten from Ashanti and early Mariah Carey to Ke$ha and Lady Gaga without Beyonce in the middle.

But while Knowles may have broadened the range of attitudes available for female pop singers, her own emotional reach has always been limited. She can be triumphant, she can be hectoring… or, yeah, she can be triumphant. It’s pretty clear at this point that she’ll never manage a song like her former bandmate Kelly Rowland’s “Still in Love With My Ex,” a rapturously heartbreaking track about betraying yourself and everyone you care about. To sing that song, Rowland had to admit to weakness, and Beyonce isn’t going to do that any more than Robert Plant or Snoop Dogg would. When Knowles talks about being hopelessly in love on “Rather Die Young,” it’s all about burning out before you get old; James Dean and gasoline and leaving a beautiful corpse. Similarly, “Start Over,” about a love she can’t leave behind, ends up as a surging future-hope anthem. Rowland’s adult despair and self-loathing—or, say, Patsy Cline’s—might as well be in another language. Beyonce’s a rock star, and rock stars kick life in the ass; life does not kick them.

Rock stars also look really stupid when they get old enough to know better… and there’s some indication that Beyonce may run into that problem as well. Her longevity has been astonishing in a genre where careers are often measured in months rather than year, but, however belatedly, her shtick is starting to fray.

“Best Thing I Never Had” is Beyonce once again kissing off some dumb dude with a mid-tempo lyricism that is much less engaging than “Irreplaceable”; “Run The World (Girls)” is a percussive girl power jam without the humor or novelty of “Single Ladies.” “Love on Top” tries to re-energize the flailing diva by reaching even further back, all the way to Destiny’s Child‘s first album and the summery, girl-group vibe of “No, No, No.” Beyonce responds with a strident, hog-calling vocal that dutifully beats the song’s would-be flirtatiousness to death and dances on its corpse.

There are a couple of bright spots on the album. “Countdown” is a bizarre, lurching mini-masterpiece; with horns, steel drums, keyboard bleeps, and a bizarrely out of sync Boyz II Men sample all bouncing around each other as Beyonce declaims and soars and even woofs like a dawg. It’s weird and sexy and hip—more like an Amerie or Robyn track than most of Beyonce’s solo work. She’s still got some fire in her, so maybe 4 is just an unfortunate detour, and she’ll figure out a way to make decent albums again. I won’t hold my breath though. Once rock stars start to suck, there’s generally no going back.