Once more into the sarcastic nothingness. 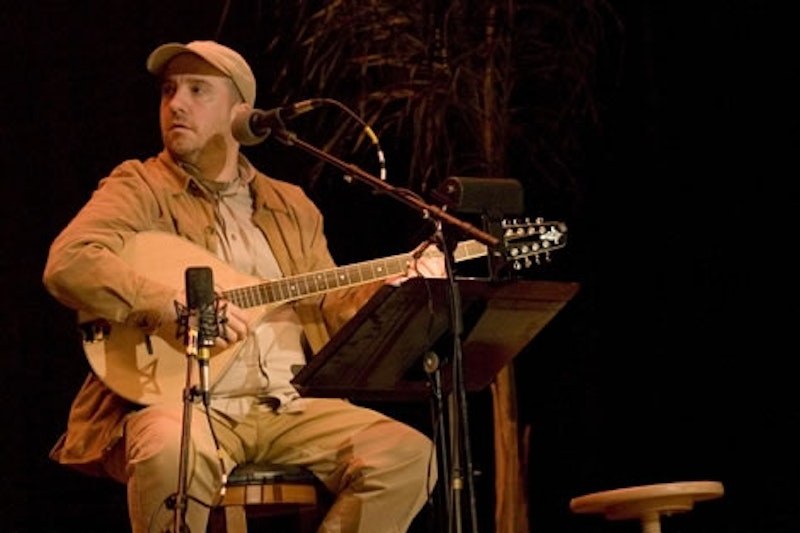 My audiophile brain first picked up on the existence of The Magnetic Fields during my early teen years, with complete credit going to the respectable and eclectic soundtrack of the oft-forgotten Adventures of Pete and Pete on Nickelodeon. I became aware of The Magnetic Fields in a much more conscious manner sometime in the last 15 years, when I’d walk across campus through rain and snow and hordes of sweaty frat boys to the local Rhino Records so I could absorb the entire Magnetic Fields catalogue one disc at a time: allowing just enough time between each album to permit the music to gestate before moving on to the next point in their creative evolution.

I couldn’t articulate it at the time, but something about these albums was important. They eschewed everything I knew about music, while at the same time embracing all of it. The lyrics alternated between hopelessly saccharine and just plain hopeless, and Stephin Merritt’s sad-dog croak was unapologetic about itself or what it had to say, or the fact that it was consciously saying things about things that had been said before in a million other love songs. His music was (and is) the kind of familiar which you can sense like some kind of creeping déjà vu, while retaining the knowledge that you’ve never heard these songs before. And despite all of the despair and ridiculously nihilistic hopefulness (nothing matters, so have a good time), it felt light and exciting. So, I became a devout Merritt follower.

Though—if you’re a devout follower of terminally-glum indie demigod Merritt, you’ve heard most of the songs on Obscurities before, culled from side projects, compilations, and a few unreleased bits of song that have amassed over Merritt’s prolific career and musical experiments. As a devoted fan, I’ve been trading these extra bits of art for the past 10 years, scraped from Google searches, soundtracks, and stumbled upon accidentally, occasionally browsing websites which chronicle these lost songs and where to find them. It’s great to have them all in one place, instead of a decade-old, scratched-up CD-R. Add these gems to five songs that were never released before, and Obscurities is a beautiful, inspiring songbook.

Fortunately, these songs are more accessible and palatable than the preceding Magnetic Fields release, Realism: a smarmy mockery of a children’s album, dripping with unfriendly, folksy camp; an album which wound up suffocated in a closet by its own self-aware cuteness. Merritt’s actual children’s album, The Tragic Treasury, recorded under the pseudonym The Gothic Archies (and originally released one song at a time to preface a series of audiobooks), was an awesomely clever, humorously morose collection of works. After the disappointing (but interesting) experiment of Realism, Obscurities is a necessary palate cleanser, and reminder that Merritt still has something amazing dwelling in him.

Highlights include a moving, acoustic version of “Plant White Roses,” sung by Claudia Gonson, which blows away all other renditions of the song, and “The Sun and the Sea and the Sky,” a song that perhaps encompasses the theme of Merritt’s beautiful oeuvre better than all others: everything and nothing matters.

Somehow, it’s all a very comforting thought. There are also weirdo bits like “When I’m Not Looking, You’re Not There,” in which Merritt proceeds through every MIDI sound possible in rapid succession, emerging with a semblance of a song, a simple concept driven to the point of charming madness. Until Merritt’s next paean to the great, lovely void, Obscurities is an enjoyable rest stop.