On Jenny Lewis' latest, The Voyager. 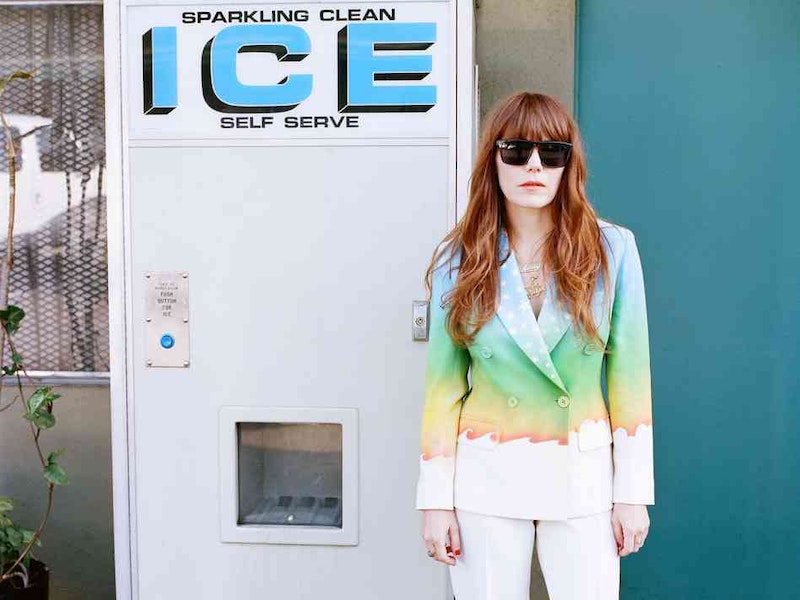 A few years back Bethany Cosentino came along with reverb-y, surfy, sugary pop songs that will always remind me of California. It was happy music, fun music and still is. Jenny Lewis' new LP, The Voyager, is just as fun as Crazy For You. The difference? The lyrics are tortured, contemplative, rhetorical questions about dealing with the rapidly approaching middle age of a songwriter who's been famous for her entire life. And beyond the sunshine pop, Lewis' career has been far more varied and pivotal. She started as a child actor in the early 1990s; her band, Rilo Kiley, with then boyfriend, Blake Sennett, began in the late-90s; and she’s been making music (on and off) ever since. Her last solo album, Acid Tongue, came out in 2008 but she hasn't been out of the game. She released an album with her (new) boyfriend Johnathan Rice in 2010 and went on a reunion tour with Postal Service last year.

Rilo Kiley has been a very important band in my musical development. Their 2003 Saddle Creek release, The Execution of All Things, will always be one of my favorites—it dropped only a month after Bright Eyes’ Lifted and remains one of the pillars of the Saddle Creek sound. It's got that emo, disconnected feel to it, but it's also filled with lush, country-tinged Americana-rock that has often defined Lewis' career. Her two previous solo albums, Rabbit Fur Coat (with the Watson Twins) and Acid Tongue, have a distinct California, Laurel Canyon folk-vibe to them. In the mid-2000s Lewis began spending time around Dawes, Jonathan Wilson and the rest of the Cali crew that grew from the Laurel Canyon resurgence. Those influences are very apparent on Acid Tongue, a complete record that even has Elvis Costello lending a hand.

Through all those years and styles, Lewis always had a pop sound. Whether it was pop country, pop rock, or pop folk, it was undeniable that her sweet voice and catchy melodies were rich with pop sensibilities. The Voyager is her first real pop record. Taking cues from Fleetwood Mac and Steely Dan, the album carves through stories of insomnia, depression, loss, rejuvenation and redemption with shiny, popping guitar and soaring melodies.

Certain tracks like the opener, "Head Underwater." even nod to recent California buzz-queens, HAIM. Lewis opens with the line, "I've been wearing all black since the day it started," over a steady thumping bass drum, 80s keys and atmospheric synth before a blast of rhythmic guitar and catchy harmonies come in.

"Just One of the Guys" is one of the most playful songs Lewis has ever penned. "No matter how hard I try to be one of the guys, there's a little something in side that won't let me," she exclaims in the chorus. "Slippery Slopes" is the closest the album comes to resembling anything Rilo Kiley and has some More Adventurous vibes to it. "If you don't wreck it, then I won't wreck it either when I'm out on the road," she sings over heavy 90s-sounding guitars. On "New You" there’s a flash of those catchy, folkie acoustics that made Rabbit Fur Coat so fantastic, but it doesn't hit has hard this time around.

Will some early Rilo Kiley diehards find it hard to wrap their heads around such a sunshine-y pop LP? They might, but if they've followed Lewis' career trajectory in the years since Rilo's first LP in 2001, they'll realize that the one thing she has never done is settle. Like her contemporary and close friend, Conor Oberst, Lewis has risen above the conventions of any one genre, band or stereotype to write thoughtful and endearing songs—pop, folk, rock, country or otherwise.