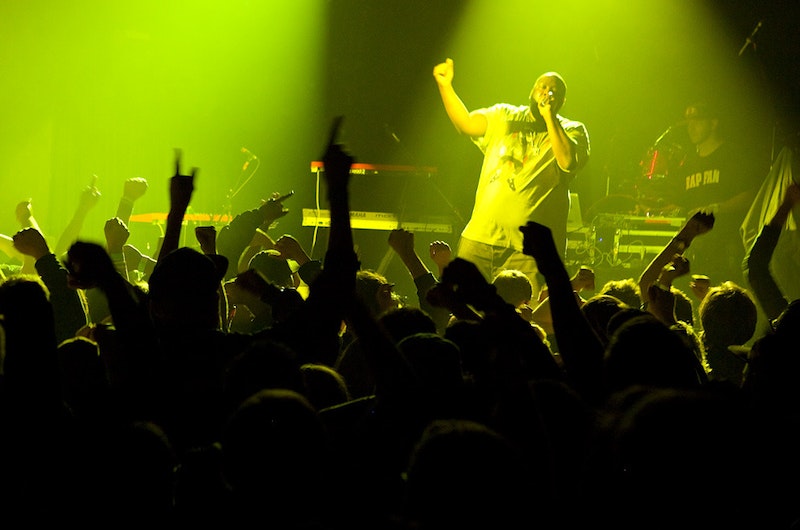 10. Copywrite: God Save the King

The pride of Columbus, Ohio, Copywrite is one of raps most talented lyricist. On God Save the King, he delves further into his views of religion than any artist I’ve heard in a long while. The elephant in the room is how big Copywrite’s ego is when he doesn’t rhyme about religion on songs like “Swaggot Killaz” and “Workahol.” Copywrite’s voice plays with beats like teens play with video games, intuitive and unpredictable. “Gsk” first verse reflects Copy’s persona “Now if any rapper is iller than me I must have missed that shit. If your girl is chilling with me she must of kissed my dick. I’m the king.” Copywrite balances this king-like persona with a couple of tracks, the most noticeable being “A Talk with Jesus” where he talks about his struggles with growing up as a sinner and how confusing religion is to him after experiencing so much loss.

“It goes, Hanna Barbara Barbarian/Bars better than yours/And your entourage, pa Sean bury ‘em.” So starts “The Genesis Of The Omega” on Sean Price’s Mic Tyson. Specializing in Brooklyn battle rap, Sean Price is always in your face with punch lines and left hooks. His style is ruff rap poetry with short verses and thunderous endings. Some of the hardest hitting tracks are “STFU Part 2” and “Solomon Grundy." Production from The Alchemist, 9th Wonder, Evidence, DJ Babu and a slew of others help take Mic Tyson’s sound to a new level. This isn’t an album for the youngsters. Sean Price appeals to an era of hip hop that is dying, but never knocked out.

8. Slaughterhouse: Welcome to our House

The thunderous rhyming styles of Crooked I, Joe Budden, Joell Ortiz, and Royce da 5’9” are rarely off point. With Eminem producing half of the tracks on a 15-track album, we get a crazy hip hop mojito. Yes Eminem and Royce have had their history together but the rest of the crew has rarely worked with the hip hop legend. The question I had before my first listen was whether all these styles could mesh to form a coherent whole. When would one of these four respected hip hop wordsmiths slip up and murder a track for the rest of them? Never! Songs like “Throw That” and “Frat House” display how heavily Eminem influenced Slaughterhouse’s sound, with crass hooks and floating synths that seem to give the rappers room to play. Producer Alex da Kid brings Slaughterhouse’s egos back down to earth with tracks like “Our House” and “Rescue Me.” Both songs feature amazing vocals from up-and-coming female vocalist Skylar Grey.

Hip hop rookie of the year Joey Badass lit up the world in 2012. The 17-year-old kid from Brooklyn says he’s been writing and rapping since he was 11. I knew none of this when I loaded 1999 on my iPod back in June. I felt like I had just time traveled back to the amazing hip hop year of 1999. Joey’s rhyming style is a mixture of Talib Kweli and Mos Def, the two New York emcees that released Black Star in the summer of 1998. An album that surely influenced every year that followed. Songs like “Hardknock” and “Daily Routine” show that Joey is more mature than his surrounding high school mates. MF DOOM produced tracks “World Domination” and “Pennyroyal” show off Joey’s lighter side as a pot-smoking hoodlum that loves women and killing beats. You can download 1999 for free here.

The knock on Nas has been that a lot of his albums sound the same as his last album. Life Is Good looks to change all of that by combining Nas’s traditional story telling style with a new grittiness. Examples of his stylistic adaptation are evident on “Loco-Motive” and “Summer On Smash” where Nas attacks the listener. Life is Good is also full of soulful tracks, like “Daughters” and “Cherry Wine," that complement his softer side. At almost an hour long, Life Is Good could be this year’s most well-developed album. Nas explores his past life as a drug dealer in “Accident Murderers,” with a little help from Rick Ross. How can he still be killing it at 40? Life is good for Nas.

5. Oddisee: People Hear What They See

The underground hip hop scene is a tricky business. How do you make a style that appeals to the non-radio listener while building a career for yourself? Oddisee has been doing it since he hooked up with Mello Music Group back in 2007 for the release of Oddisee 101, an album which propelled Mello Music Group to the heart of the underground hip hop world. Oddisee produced every track on the twelve song album People Hear What They See with his patented soulful melodies and boom-bap drums. His voice reminds me of wise actors like Samuel L Jackson and Morgan Freeman. “Way In Way Out” talks about Oddisee’s distaste for greed and money-grabbing. “Another’s Grind” speaks to staying motivated and letting the chips fall where they may. “Think of Things” concludes with an echoing "what more can I say" as if to suggest that Oddisee has laid out his entire vision, and now it's up to you.

The Black Hippy Crew consists of Ab-Soul, Kendrick Lamar, Jay-Rock, and Schoolboy Q. They have their own production company called Top Dawg Entertainment which released Control Systems. Kendrick and the rest of the Black Hippy crew have said that Ab-Soul is the genius behind their collective and you can see why in this 17-song masterpiece. His style is new to the hip hop world as his voice cuts through beats disregarding conventional timing. Tracks like “Track Two” and “Pineal Gland” are two of the most up-tempo beats on the album and help to show off Ab’s talents. Each beat on this album leaves room for Ab to interject his self-proclaimed black-lip Einstein flow onto it. The standout feature comes from Danny Brown on “Terrorist Threats.” Ab-Soul starts off with a verse that sounds the same as the previous three songs. Then the chorus, and on the second verse we see Ab-Soul transform into an amazing Danny Brown imitator, only to be followed by the real Danny Brown coming on and absolutely killing the third verse.

Killer Mike has been around the hip-hop game for a long time. He’s put out six albums to date but his previous features are what’s most notable, appearing on Outkast’s single “The Whole World” and Jay-Z’s “Poppin’ Tags.” Then came R.A.P. Music, (which stands for Rebellious African People) where Killer Mike teams up with the likes of El-P to create chaotic southern fried goodness. El-P had this to say in an interview with HipHopDX about Killer “He must’ve wrote down three lines for every song that’s on that album. He would just go, and I’d take him back and record, and the shit would just come out of his head. I thought that was just how he works, but he told me later, he had never done that before. There was a chemistry there that brought out the best in him and the best in me.” “Big Beast” starts off slow and then builds with the momentum of Killer Mikes voice. Features from southern veterans Bun B and T.I. bring some smooth verses to even out Mike. “Butane” is the most noticeable banger on R.A.P. Music with heavy synths accompanied by distorted drums. The title track, “R.A.P. Music,” talks about how he feels closest  to God when he listens to rap music. “Rap music is my religion,” says Killer, and I believe him.

El-P was hit hard by the death of his friend and former hip hop cohort Camu Tao in 2008. Camu passed away after a two-year battle with lung cancer but his memory lives on through El-P. The Brooklyn producer dedicated Cancer For Cure to Camu Tao. El-P stated that “When you get hit with death, sometimes as horrible as it is, one of the things that can come out of it is a reaffirmation of how much you don’t want to go, and I think that’s what happened with me." Each song in Cancer for Cure transitions into the next with no hesitation and no warning and sounds don't stop working together until the album ends. “Request Denied” starts out with El-P flexing his production muscles with hard hitting drums and earth shattering synths. He doesn’t lay a verse down until three minutes into the track when the chaos is broken by a distorted bass riff and fluttering drums. From that verse on El-P is in control of his craft. Songs like “Oh Hail No” and “Tougher Colder” have El-p spitting in your face lines like “I liked the part where you cried/I liked nothing else” and “To the mother of my enemy I just killed your son.”

Number one on a lot of people’s top albums list, Kendrick Lamar’s Good Kid M.A.A.D City also gets my hard earned vote for my number one hip hop album of the year. Compton born Kendrick Lamar takes us through the life of K-Dot which is deemed his alter ego for this project. We see K-Dot transform from a girl-chasing youngster in “Sherane” to a confident backseat rhymer in “Backstreet freestyle.” Kendrick talks about his first experience with smoking weed on the second half of “M.A.A.D City” where he talks about foaming at the mouth from smoking weed tainted by cocaine. K-Dot’s story is enhanced by voicemails from his family and friends at the end of each track. These snippets help to produce a movie reel feel that enable Good Kid M.A.A.D City to reach something more than just a hip hop album.