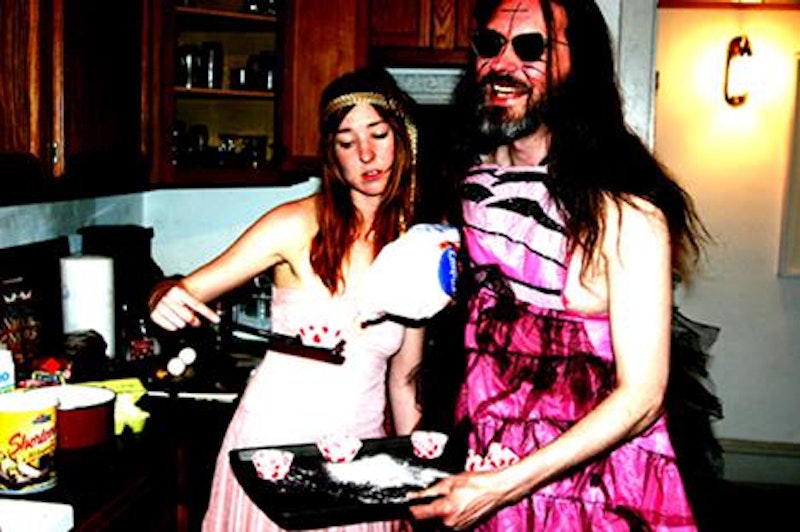 Solo and as half of Condom Sex, Sharlyn Evertsz’s work has always felt determinative; there’s never a sense of pure randomness about what she’s doing. Typically the work is split between out-and-out noise with logic, and a noisy, distorted electro throb with obfuscated vocals. “Dirty Hellos” hews to the latter approach, which is emerging as her trademark sound. Chipped and cracked, the synthesizers flare and scrape alongside a vocal so desiccated that it’s nearly a husk; the effect is such that beat and singer seem to be riding out an earthquake and surviving only worse for the wear, even as the guiding melodies grow stauncher and stronger. Bonus points for keeping the running time brutally brief, like the teasing introductory chapter of a novel that can only grow wilder, weirder, more alluring.

If video-game house music doesn’t exist, maybe “Apocrypha Discordia” endeavors to mint it as a sub-genre. Hard, twitchy blobs of tone zip by when they don’t re-occur; some are bumpers, some are pinballs, some are breakdancing beasties fleeing heedlessly or in hot, mouth-breathing pursuit. There is at the same time an odd sense here of complex equations being posed and solved. Once they’ve acclimatized us to the groove, this duo tilt the plane, introduce a beat that evens out the rush, up the dosage of whatever is fueling things, filter out that sense of early randomness. So we’re left finally with slightly frenzied house, impeccably constructed, that runs out of acreage when—if I’m being honest—twice the eight-minute running time would have been pure bliss.

Don’t ask me what year this is from—it popped up on Facebook the other day like a welcome old friend I’ve never met. Bunnybrains have a long, convoluted history that I won’t even pretend to grasp, but Box the Bunny remains a sick, fascinating listen: noisy, no-handbrake performance art that can cohere into brilliance as easily as it can collapse into nonsense. Relatively legible, “I C U” passes for a hit single in the Bunnybrains-verse. Shred-y barbed wire guitars thread through as lead Bunny Dan Seward murders chorus and verse in the same lost, inimitable warble, with nary a drum fill or bass bump to be heard anywhere. It’s garage rock for garages without roofs or floors.