Hitting the Sack with Jeff Bridges 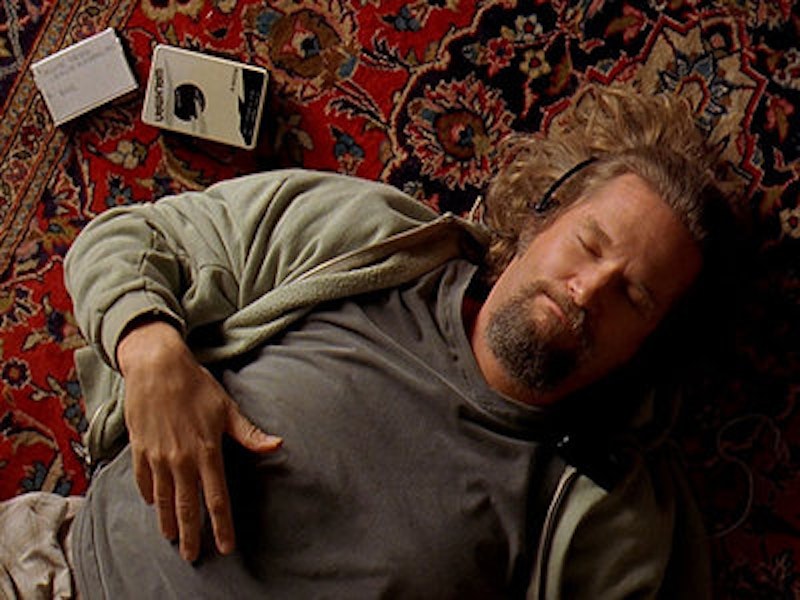 When mild, unexplainable hallucinations begin to spill out of the blackness behind my eyes, that’s when I know that I’m on the cusp of sleep. It’s a special time, an entrée into an empty stretch of unconsciousness where various anxieties, hopes, and hobgoblins of the imagination vanish, and I temporarily cease to exist. This rarified state cannot be forced; it must arrive naturally, unbidden. When it doesn’t happen—as is the case when I get to bed late, am jittery, or there’s too much caffeine or sugar in my system—the effect is disastrous, and suddenly the stress of waking life is supplanted by a very real fear of consciousness and the possible impact insomnia might have on the coming day. The half-hours pass torturously. Whatever soundtrack to the arms of Morpheus I’ve chosen—jazz, drone, Vietnamese pop at low volume—ends, so it’s necessary to begrudgingly restart it, in the process losing whatever limited degree of restfulness I’ve acquired to that moment.

Sleeping Tapes, a sleep-aid album actor Jeff Bridges made to benefit the No Kid Hungry charity, operates from the idea that there are layers or stages of sleeplessness. It’s a quiet, soothing suite of drones and gently surreal asides that recall Bridges’ “The Dude” persona from 1998’s The Big Lebowski. My prime-time test run of the record, which was not a total failure, culminated with me dozing off in the late going—probably because I have to be pretty comfortable with a piece of music before it can lull me to sleep. It should be noted that Sleeping Tapes also functions nicely (maybe even better, honestly) as a daytime meditation salve or sweet brain tickler, in the same way that one might reach for Brian Eno’s Music for Airports or Discreet Music when the nerves are jangling dangerously. I recommend going a few rounds with it to break it in, then, when you’re ready, see how deep Bridges leads you on the Sandman highway, rating your personal sleeplessness according to the following parameters.

Light Insomnia—A Little Tense: Bridges displays an especially acute understanding of sleeplessness at the outset of Sleeping Tapes, where the goal is to loosen up the listener a bit. There’s a novelty to all of this, isn’t there? Bridges talking to us about sleep, us listening, Bridges aware he’s being heard but not knowing who’s hearing him prattle on. We’re all a little nervous about how it works. On “Introduction,” he fumbles his equipment, mumbles dialogue on the fly, and sighs as we get situated under the covers and fluff the pillows. “Everything implies everything else, yeah?” Certainly, certainly. “Sleep. Dream. Wake up.” threads somnolent test tones through crowds of Bridges samples that multiply and cycle through various textures, some whimsical, others slightly demonic; the last bit makes it sound like his voice is dissolving in a glass of Alka-Seltzer. “Chimes for Dreams” is just that, as though badly field recorded from a 1960s film where a sad clown is onstage in a silent auditorium, gingerly tapping xylophones; it’s both gorgeous and ghostly.

Moderate Insomnia—Tenser Still: You still awake? It’s okay; it’s cool. Just be cool. After all, Bridges is a consummate professional, and he’ll see you through. A synthesizer pitch-shifts lazily from tone to tone, then our host introduces us to the humming technique he practices before walking on set. It reminds me a bit of the warm-ups we used to run through in high school choir. Keyboard chords and the sampled laughter of children at play creep up behind him, which I hope you’re not even noticing because you’re now out cold. “Hummmmmm” ends, and Bridges ambushes his wife, who’s just woken up, and convinces her to hum for a few seconds. Then, just like that, he’s holding court with a bunch of kindergarteners, querying them for dream stories, as flamenco guitars flutter in and out of the mix. “I’ll see you guys later—I’ll see you in my dreams, okay?” The Dude says, intending to take his leave. The little tykes roar with laughter, everyone keeps talking anyway, and you get the sneaking suspicion that he doesn’t really want to go home.

Serious Insomnia—Oh, Shit: Oh, no. No, no, no. By this point, it’s normal to be a little panicked. Bridges offers you some water, cracks his knuckles, and breaks out some stories. From here on forward, things take a turn for the surreal; the logic on offer is dream logic, as befits a body and mind in need of rest. In one story, his narratives bounce from a raven in flight to an ensign on a ship to trees battered by a storm, as bongos pop and electronics hyperventilate in the background; in another, set to light jazz fusion, he idly reminisces about a tenor saxophone player who liked to play with Silly Putty. It’s an intriguing juxtaposition: an almost-literary fantasia bleeding through to a slightly boring uncle fantasia, a one-two punch if there ever was one. There’s something removed about the first story, and something harmlessly personal about the second. But then there’s the third story, which drifts in an almost Sprockets direction, with Bridges’ vocal torqued satanic as he explains what will happen to his earthly form after he dies, and the fourth, a DJ mix of semi-random images scored to yearning strings and burbling water where, um, you kiss Jeff Bridges.

Full-Blown Insomnia—Serious Worries About Various Personal Matters, The Future of Life On Earth, Whether Someone Is About to Break into Your Bedroom: By now, who would blame you for giving up on sleep completely? This is where you ask, “What if I never sleep again?” then reply “Fuck it, who needs sleep?” And Bridges, God bless him, is right there with you, nodding along, as if to say, “Yeah, man, fuck sleep. Sleep is a lie.” And then he throws you a parka and a walking stick and you go to his Prius and drive out to “Temescal Canyon”—the “Junior Dad” of this context, basically—for a stoned midnight hike because, well, what else is there to do? There are other hikers, birds, a stray dog, a mountain stream, and Bridges describes them all or waves to them. “If you want, we could pretend to be crows.” You don’t take him up on it. There’s an abandoned office chair by the mountain stream, which Bridges tosses rocks into, but then, there’s the howl of a train. Why is any of this happening? Because you’re dreaming, dummy, and Bridges finds some gold and you both stuff gold doubloons into your parka pockets and set off towards the peak, towards the sunset, towards… sleep? Could it be?

You Will Not Sleep, Ever: You are stark raving awake, and Bridges is just fucking with you now. Over the choral sighs of “Feeling Good,” he softballs a flood of innocuous, ridiculous and common compliments your way, like the world’s most sympathetic motivational speaker. Unless insomnia really has you in its grip, you shouldn’t be laughing—you should be watching the waking world slowly tumble out of view, in which case the burnt, bookending inanities of “Seeing With My Eyes Closed” and “Goodnight” should equate to the gentle, warm kiss of a lover, tucking you in and switching the alarm clock off, just this once.