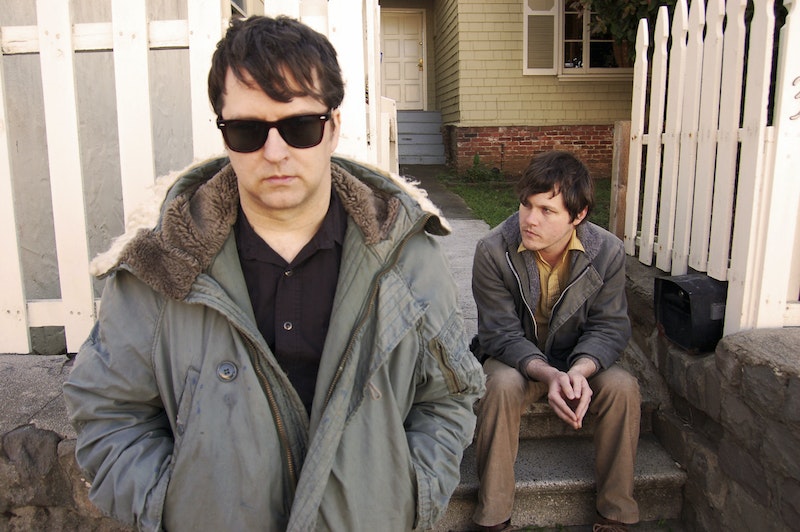 You know within a few songs into Voices in a Rented Room whether you're swooning or not: two entwining acoustic guitars, a bit of pedal guitar for seasoning, next to zero percussion, an air of puzzled, inconclusive introspection hovering over everything like bong smoke. New Bums are the folk-dude duo of Six Organs of Admittance's Ben Chasny and ex-Skygreen Leopards member Donovan Quinn, and "Your Girlfriend Might Be A Cop" is the point on the album where they cross the line from earnestness into farce, uprooting the sixth eighth of a short story and replanting it as something half-deluded and open-ended, somewhere between a man-to-man confidence and a sideways confessional. The moment, in other words, right after Bro A tells Bro B he's way in love and bought an engagement ring, and the moment before shit gets rowdy and rough.

For some reason—I mean, don't ask me why, it just seems like it would be fantastic and cosmic—I really, really want to hear an excitable Ramones tribute band cover Rented Room, the debut album from New Bums, particularly "Cop." A man can dream, but for now, the reedy, messy chug of the original is enough to scratch an itch I didn't even know I had.

Twists does something I haven't heard any other album do: it injects the robotic "Droid" sound effect or an uncanny imitation of it into instrumental experiment rock. Jim Lace and Alex Nova apparently have considerable musical backstories that I'm unfamiliar with; this collaborative album suggests I may have some catching up to do. As you may have guessed from the title, "Solar Phallus Man" has its head in space rock, but its feet are grounded in a sort of free-folk reverie. What that equates to, in practical terms, is a bwwwoinging stratosphere of lava-lamp Nords, Rolands, and Korgs, with a spindly electric ax that rings like a harp crocheting a net of invisible thread on terra firma; field samples figure in there somehow, too. I'm reminded a bit of Solar Temple Suicides and any number of post-John Fahey, signed-to-Thrill Jockey string pickers. A fine place to get yourself good and lost.

I heard "Happy" for the first time last weekend, waiting on line for a Love It-sized Very Vanilla milkshake at Cold Stone Creamery with a bunch of people who didn't feel like waiting all night for premium-grade ice cream, when they had places to be, and two dour staffers who probably felt terribly put-upon. The song was playing over the PA system, and one of the staffers was singing along as she crushed nuts and M&Ms into pistachio ice cream on a marble slab; the other staffer asked her why she was singing it, to which the first staffer replied—with a smile that could have melted a glacier—that she didn't know, she just liked it, it made her feel good.

I knew what she meant, because "Happy" had the same effect on me. There's something airy and giddy about the song—a wistful, ebullient Pharrell number that nobody will ever feel ashamed for playing at a block party, a kids' birthday bash, alone in the car, with your steady sweetie in a tender moment; it's pure, perfect soul-pop without any taint of subversion or insincerity or fake thug talk or terrible puns. It can be sung in a variety of registers in countless humors, and all you'll need to recreate the sweet-spot church joy of the original are the two hands God gave you, or as many hands as you can get to clap along with you. Seriously: try it now, wherever you are.