Can Rick Ross Stay on Top?

Mastermind is more of the same. 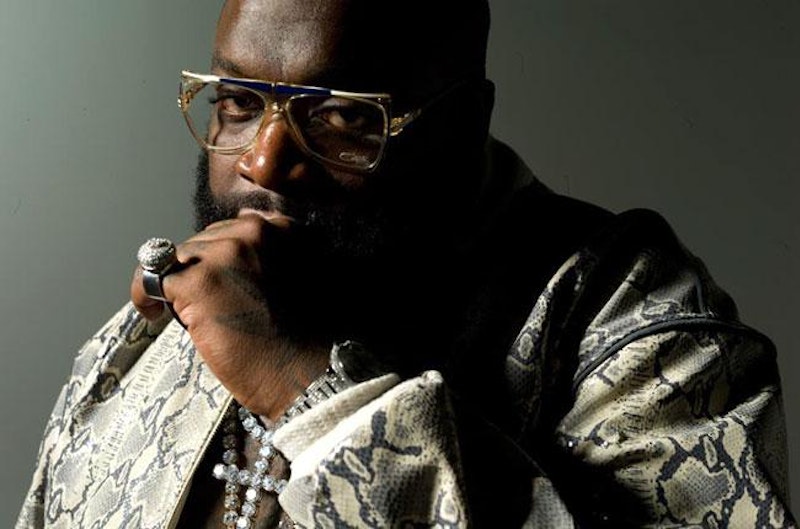 When an artist gets to the top through sheer, overwhelming power, he or she usually has to change their style: if you have the biggest sound around, it’s hard to go anywhere but down. Beyonce had to retool on her latest release. Before that, Arcade Fire traded in their steady, world-beating marches for a pair of dancing shoes. Kanye did a complete 180 after the bombast of My Beautiful Dark Twisted Fantasy. The rapper Rick Ross, who just released a new album, boomed his way to the top with 2010’s Teflon Don. Since then, he’s been moving sideways.

Ross landed his first hit in 2006, but it took him several years to release music that matched his thundering (if sometimes plodding) raps and grandiose declarations. For Teflon Don, he harnessed indefatigable beats from Lex Luger and Kanye. He also put together his shortest work, just 11 tracks, which served him well: over a short set, his style can seem like a tour de force; when it drags on, he feels more like a broken record. Teflon Don had big singles—the roaring “B.M.F.” and the smooth “Aston Martin Music”—while also maintaining an arc as an album, building to a peak and then coasting back to earth.

Ross hasn’t been able to top this, but he’s worked in other ways to expand—or at least, maintain—his influence. He brought along a group of youngsters, including Wale and Meek Mill. He landed guest verses from star rappers like Andre 3000 (“Sixteen”) and Dr. Dre (“3 Kings”) or contributed to stars’ albums: Kanye (“Devil In A New Dress”), Drake (“Make Me Proud”), the most exciting song on Jay-Z’s recent album (“fuckwithmeyouknowigotit”). He’s put out several mixtapes and one studio album since Teflon Don; the album went to #1, and some of his singles have been powerful—“Stay Schemin’,” and last year’s “Bugatti,” an Ace Hood song that Ross assisted.

It probably hasn’t helped that over the same period, Ross has been embroiled in several scandals. First, it came out that he had worked as a corrections officer, not involved in the drug-dealing life he constantly raps about. More recently, he appeared on the remix of Rocko’s “U.O.E.N.O” and dropped a line about slipping a girl date rap drugs and taking her home. Reebok responded in turn by dropping the rapper, who they had been sponsoring.

But somehow, Ross endures—his Mastermind album keeps him treading water. Some songs in this new collection rank with Ross’s best. “Devil Is A Lie,” the first single, features a gospel-sounding sample with horns that has some of Ross’s most intense rapping. Usually predictably monotonic, he raises his voice until it’s almost shrill as he yells “the devil is a lie,” simultaneously terrified and terrifying, trying to convince himself of something that doesn’t quite make sense. The song also features Jay-Z’s most inspired guest verse in some time. After widely-mocked additions to Justin Timberlake’s “Suit and Tie,” Drake’s “Pound Cake,” and Beyonce’s “Drunk In Love,” Jay-Z sounds engaged, alert, lithe, even exciting. Ross draws something out of Jay that few other collaborators have been able to tap.

There are other triumphs here. “War Ready,” produced by Mike Will Made It, moves slowly and unstoppably: it’s ominous like the beat to “Stay Schemin,’” but completely unhurried, rejoicing in menace. Kanye shows up on “Sanctified.” “God I been guilty fornicating from my status” is a terrible line, but it’s worth hearing this song just to hear Kanye yell, “God sent me a message, said I’m too aggressive. Really? Me!?! Too aggressive?!?” He sounds completely incredulous, and also like he’s knowingly poking some fun at himself.

At the same time, the peaks come with valleys. “Rich Is Gangsta” is a smart idea on Ross’ part—if he’s got the money, who cares about his past—but the beat lacks conviction. The grim falsetto of Abel Tesfaye (the Weeknd) appears on “In Vein,” though it’s not clear that his brand of darkness gels with Ross, or, for that matter, his brand of drugs, as Ross usually raps about cocaine and stays away from veins. Either Ross sounds flat next to Tesfaye, or Tesfaye sounds like something Ross would swallow without thinking. Maybe both. “Blk & Wht” is economical and compact, and it would serve another rapper well. But Ross isn’t about economy.

In some ways, the fact that Ross is still treading water is an achievement. But rap is moving towards renewed interest in lyricism—see the buzz about Kendrick Lamar—and scrappy beats that push movement. Neither environment plays to Ross’s strength. How long can he move sideways?