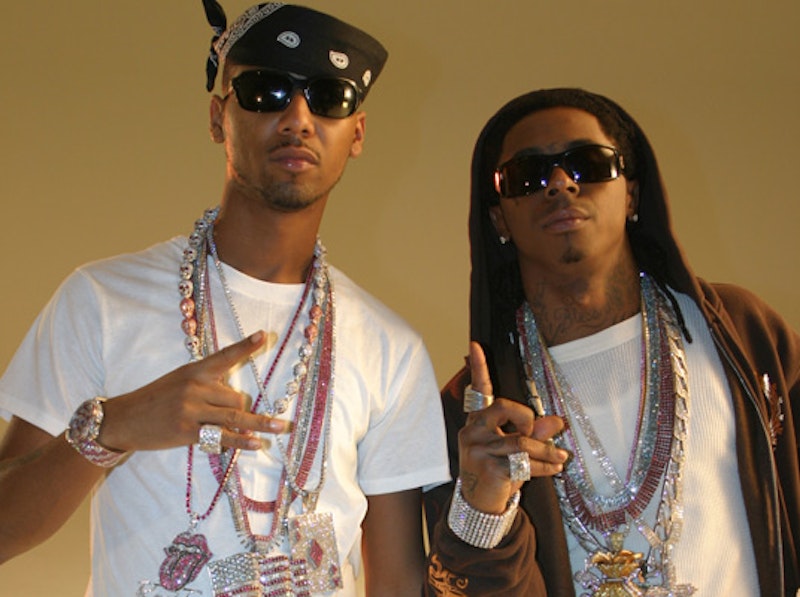 You'd have to be pretty stoned to turn the kindergarten classic "Apples and Bananas" into a rap song, so it makes sense that Asher Roth—who spends a lot of lyrical real-estate rhyming about weed, and trades on a sort of just-this-side-of-loopy Drunken Master flow—would be the first MC to do so, probably. You'd think that someone appropriating "Apples and Bananas" for a rap song that is essentially about being a D-list rapper who gets stoned and mostly raps on mixtapes might step a few tokes over the line and totally forget that the chorus of "Apples and Bananas" is sung using, like, five or seven weird vowel inflections, somehow fixating on just two, and you would be right.

When not making merry with the tune that was my son's favorite car driving song three years ago, Roth plays a loping patty-cake with rhymes that sidle between free-associative, nonsensical, and arguably autobiographical—if, that is, you're inclined to argue with someone for whom "pop a chakra/pop, lock and drop it/blak blak, get off 'em" counts as profound discourse. But it's okay, really it is: "blazed semi-humane Cam'ron" is a good look for a dude who brags he's moved up from "groupie hoes" but probably hasn't. The beat? It's a mess—barbershop quartet Roths sleepwalking the hook on the chorus, then the rest is all mulched, beastly mixtape dross. Listen close at the end and you'll hear where producer Don Cannon ripped off Pusha T's "Numbers On The Boards," which itself ripped off something considerably more canonical.

The best bit of "Berzerk" happens in the song's first 20 seconds, as you're acclimatizing yourself to the Rick Rubin-encouraged flambé of electric guitars and re-acquainting yourself with Eminem's live wire of a voice. "I'm about to bloody this track up, everybody just back up/That's why my pen needs a pad, cuz my rhyme's on the ra-ag," he yelps, like there's a ripchord inside of him that someone has yanked out with special vehemence, like he's really crazy. That "ra-ag" is so feral, so deranged, so over-the-line that it's more than worth the price of admission and allows me to forgive everything else about "Berzerk"—if I went further, I daresay that that yelp has the effect of legitimizing everything surrounding it. It's like a rebel yell, a call to arms. That's important, because "Berzerk" is a glorious, ungodly mess. Not in the way that "Just Lose It" was a disaster—i.e. a multi-platinum pop star collapsing on record—but in the sense that this is calculated pastiche of two dozen different ideas that shouldn't work but somehow do. There are no straight, wonderfully quotable lyrics here, plus the referents are ineptly and indifferently out of date, and Shady does all kinds of weird gear shifts from rapping to singing that should be unforgivable but aren't because while listening everyone can already visualize the trademark loony, out-Weird-Al-ing-Weird Al video treatment and because we're programmed to expect a showy, manic lead single. Furious, mammoth-sized guitar riffs, the ghost of canned strings, a smidgen of DJ scratching, a hard drive's worth of indistinct and pointless samples crushed up together like Ritalins ready to snort. If you plan to attend any frat parties or youth events DJ'd by teens or twentysomethings, might as well come to terms with this song, like, now, because you're going to be hearing a lot of it.

The difference between Dr. Dre's next album and Juelz Santana's next album is that while neither will probably ever see the light of day, people actually anticipate Dr. Dre's next album. It's not hard to see why there's a difference, here: Dr. Dre invented g-funk rap out in California and masterminded a bunch of stone classic albums and singles, while Santana was part of a mid-00s posse of NYC rappers who, beloved by hipsters, extolled the virtues of extreme misogyny and flamboyant colors. Detox hasn't dropped because Dre's a crazy perfectionist; Born to Lose, Built to Win hasn't dropped because post-downloading, being a rapper signed to a major label who isn't one of 11 or 13 powerhouses is a crap shoot—it's harder to get your stuff out on the streets than it is to clear samples.

So Santana puts out lot of mixtapes and is part of something called Skull Gang and boasts about as much visibility as your cousin Duane who gives his rap remixes away for free on Soundcloud. There's a "but" to this, which is that Santana a) still knows lots of rappers who are legitimately famous, and b) works wonders with simplistic verses cracked like whips. "Black Out," like so many of Santana's joints, is about how he's infinitely richer, handsomer, and better than you and sleeping with your woman. It's a wonder that he finds so many vivid, you-effacing ways to convey this superiority. "Bitches think I'm a photographer, my neck stay with that flash on," he brags, after invoking Mitt Romney for no reason. Lil Wayne turns up to try to make the Guinness Book of World Records for most uses of "pussy" in a guest verse, and given how obliviously scattershot his work has been post-incarceration, his blinkered focus feels like a blessing. Then Santana's back, ejaculating all over the tattoo of your name on your girl. "They say real niggas don't last, no, there's just too many fake niggas making real niggas look bad," he pontificates, and maybe they're something to his reasoning. Cam'ron wishes he was still this inexplicably magnetic a presence.