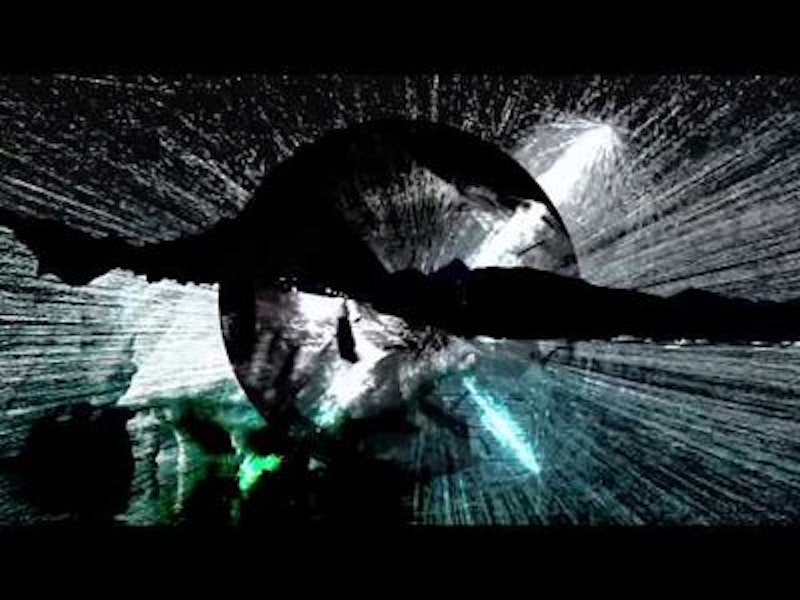 The older I get, the more difficult it is to be really and truly thrilled by new music or disgusted by new music; by and large, discoveries are maddeningly average, i.e., competent or somehow inadvertently repetitious. So it’s downright exciting to stumble upon something like “Empire Underwater,” the title track from a forthcoming album by Oakland, CA’s Styrofoam Sanchez—the kind of song where there’s no honest way to listen except to close your eyes, crank up the volume, and just stew in the carnage like it’s some kind of Roy Masters meditation exercise.

It begins with what sounds like the unwrapping of cellophane package, which gives way to almost six undulating minutes of holy water poured onto hot burners, streaking squirts of electronic splooge, writhing power lines, seething distortion, and a demon damning you for eternity live from some sort of post-apocalyptic purgatory. Listening to and trying to grasp “Empire” is analogous to awaking in violent sea and thrashing about for something to steady yourself, and I’m overwhelmed by its sense of desperate abstraction no matter how many times I play it. Bring on Empire Underwater.

Dierks Bentley, “Drunk on a Plane”

The advantage of never listening to pop radio is that pop smashes sneak up and smack you at random times. “Drunk on a Plane” cold-cocked me on the Boardwalk in Ocean City while I was in line at Fractured Prune, dully fiending for coffee and donuts. What initially registered as a lightweight goof would become part of a personal soundtrack for that trip—see also Lana Del Rey’s “Off to the Races,” and Bryan Eubanks’ Anamorphosis—and that rarest of things: a modern country song I can’t quite quit.

The hammy ridiculousness of Bentley’s conceit and the fact so many words rhyme or can be made to rhyme with “drunk” and “plane” makes me wish he’d been willing to go further, go weirder; the mawkish video hints at ways he could have fucked around while embracing a multi-cultural corniness that underlines the singer’s desire to appeal to the widest possible audience. But, you know, if he’d retained the chorus and verses and added on some increasingly bat-shit verses, he’d still have come out a winner, because everybody knows what it feels like to be dumped, and everybody knows what it feels like to get fucked up because they’re sad. Dope element: the woozy pedal steel that swamps everything. Odd element: the fact that the song starts with Bentley addressing his absent ex (“you”), and ends with him addressing his fellow revelers. Telling element: the “got the 737 rockin’ like a G6” verse/gang chant feels scans like a validation of the normalization of hip-hop tropes, because it feels only mildly surprising, contextually. It’s Mardi Gras! Up in the sky!

Longtime readers—of this column, and otherwise—know that I’m partial to experimental diversions that cleverly incorporate bells and fluids, which is to say that the prolific Marquardt’s got me by the short hairs with “Drone Messiah (self-inflicted wounds).” It isn’t just that the core, concurrently-deployed keyboard motifs glow like an irradiated mountain stream and a gamelan session, it’s that their forward motion is artfully stunted by interferences that are difficult to describe and (apparently) a small arsenal of bells or cymbals, with a skein of denatured vocals fed into the works in the late going.

One of the movies I’m ridiculously psyched for this autumn is Dumb and Dumber Too; in the trailer, there’s a scene where a character who has painstakingly disguised himself as a snack machine seems to emerge from that snack machine in order to trail another character, incognito. “Drone Messiah” is sort of like that, in the sense that the central melody established at the outset is the snack machine, and the obfuscating elements accruing throughout endeavor to fabricate a lurking, lurching phantasm.