What’s good music? In America (and not just here) the answer often comes down to, what is authentic? 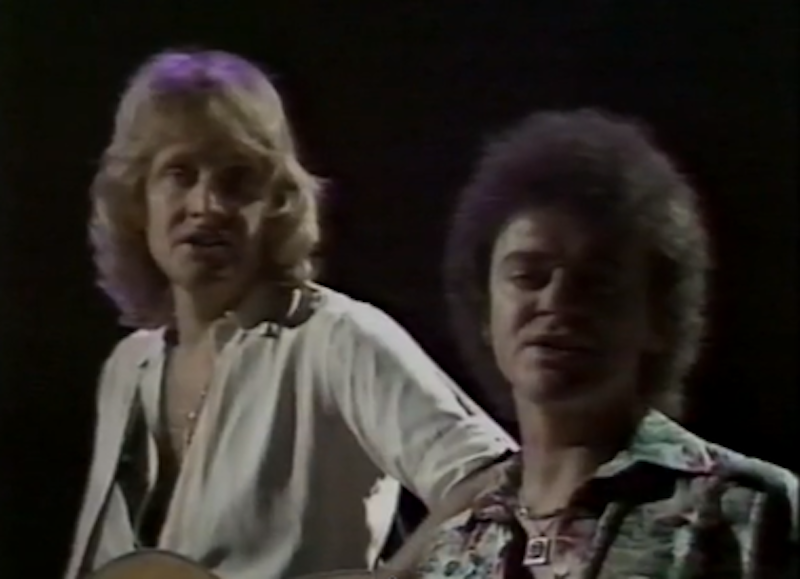 Bob Dylan is certainly a touchstone of authenticity. The roughness of his singing and the improvisatory almost/randomness of his lyrics signal honesty, down-home genius, and virile swagger; his is a world where you meet women working in topless places and stop in for a beer. His references to folk, blues, and country sources point to experiences of pain and loss. He knows about people who are real, and so he's real too.

Air Supply is coming from a different place.

The reason Air Supply is a punch line is because it isn't Bob Dylan. Instead of gritty amateurishness, Air Supply has that professionally slick piano tinkling along someplace that is absolutely not a crossroads and Russell Hitchcock emoting like a fruity castrati in too-tight pants. The winking reference to making the "stadiums rock" (emphatically in quotations) as a vivisected guitar pretends to be cock rock for a couple of bars just underlines the gratuitous lack of grit. Because there is no grit. There is only schmaltz.

So, yes, if you're looking for authenticity, Air Supply is telling you right there in their name they’re the wrong vendor. Instead, what Air Supply has to sell is their very inauthenticity, the transparent showmanship of bathos. Instead of knowing earthiness, you get that preposterously gifted voice soaring amidst lyrical puffery like, "The beating of my heart is a drum and it's lost and it's looking for a rhythm like you." It's a towering cotton candy blank; emotions pinned, as the song says, to not much of anything. Rather than pretending to be real when you listen to Air Supply, you get to pretend to not be.

Air Supply isn't a great band… but some inauthentic bands are.

The Carpenters are working the same sort of territory as Air Supply—you've got the tinkling piano, music heading for the ramparts and the voice heading up there with it. Karen Carpenter's singing has a purity and expressiveness that Hitchcock's helium novelty lacks, though, and Neil Sedaka's lyrics manage sophisticated cheese that's a significant improvement on Air Supply's more lumpen brand. As a result, the smooth surface comes across not just as exuberant bombast, but also as a kind of disavowed desperation. The smiling Disney mask gapes open, and inside is a bleak emptiness of soul.

That's the appeal of Brian Wilson's music as well. Why exactly the Beach Boys are critical darlings is a bit unclear; perhaps it's just that they timed their careers right in the middle of Boomer heaven, or maybe it's the flashes of Chuck Berry-esque guitar on their early hits. But by the time of the 1968 Friends, such authenticity as there was is gone, and what you're left with is the kind of fruity, neutered vocals that will later lift Air Supply aloft, and the funkless, polished plastic jazz arrangement that Richard Carpenter would clone. Even more than his successors, Wilson wallows in his inauthenticity—the vacuous space where a real self should be.

"I get a lot of thoughts in the morning

I write 'em all down

If it wasn't for that

The next verse is Wilson trying to remember a friend's phone number and thinking about it and remembering it and calling, but then the friend isn’t home so he has to write a letter. No doubt consumption of weed (and other things) is in part responsible for this anti-narrative, but through whatever chemical combination, the song is about its lack of being about anything—it's adrift in its own expansive hollowness. Proponents of authenticity often argue that you need to be real to be an individual, but Air Supply, the Carpenters, and the Beach Boys show that you can be idiosyncratic and even occasionally beautiful and still be made out of nothing at all.