A Compelling Twinge of Insecurity

An interview with musician Joseph LeMay. 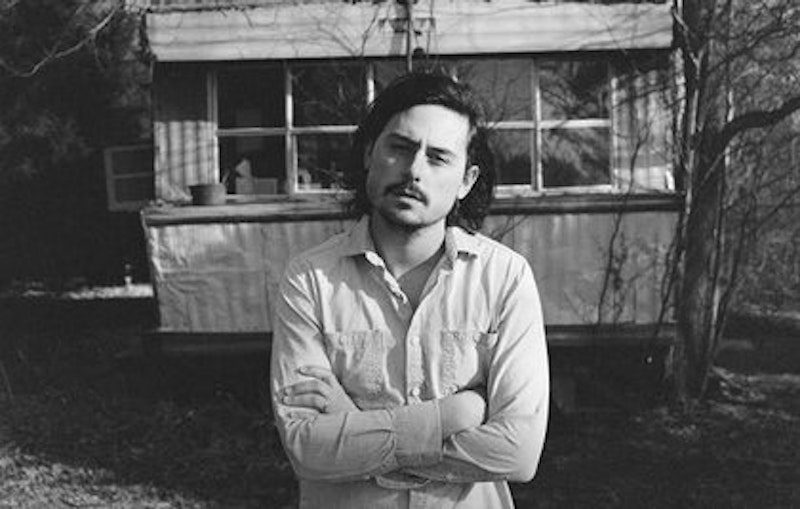 Joseph LeMay’s new album, Seventeen Acres, is noticeable for its sense of location. This comes through in the title—which refers to a carefully parceled amount of land—and the front and back cover, which depict the trailer LeMay lived in when a lot of album came together. The first words on the record: “17 acres, 2 old teenagers, just living life and making love on our terms,” sings LeMay.

The teenagers in question are presumably LeMay and his wife, Molly. A few years ago, sick of Nashville, they moved to an old trailer owned by Molly's parents in Western Tennessee. LeMay described the scene, hilariously, to CMT Edge, “Winters were frigid. Springs were pretty wet until we finally found where the water was getting in. Summers were hot as hell. Fall was perfect, though.” When he wasn’t looking for leaks, LeMay wrote and recorded songs, recording them nearby at his in-laws’ cabin.

“2 old teenagers” is not an expression you’d expect to hear from an 24-year-old singer like Lemay—it would seem more plausible coming from a much older artist, like Rodney Crowell or Willie Nelson, reflecting back on distant youth and freer times. A lot of Seventeen Acres has a feeling of wistfulness, a compelling twinge of insecurity. That opening track starts out sounding like paradise, but LeMay bursts the bubble with an observation about that trailer: “A few less square feet than we thought it might be.”

This balancing act happens frequently. “Crazy Woman” tells a story of lovers head over heels, bent on mischief: “Adios Mississippi river, me and that girl of mine/bought a little ring, got a little married, and we’re gonna get a little out of line.” But the hushed, pretty harmonies of “Fruit on the Vine” are less ecstatic. “You loved me too much,” LeMay sings twice, and he follows that with an admission, or an apology—“I didn’t tell you enough.” The romping “Molly My Girl” contrasts in a similar way with “Call It Quits,” a song about taking measures to protect oneself as a relationship ends.

Acoustic guitar forms the base of most of these songs, which land somewhere between three interrelated forms: blues, country and folk. LeMay fills out the arrangements with a lean band and a string section. He has an easy nasal croon, but can scuff it up too, sounding appealingly ragged on “Warrant For My Worry,” a startlingly spare interlude built solely around vocals. Sometimes the music gets rough around the edges too, as on the 1970s Neil Young-channeling “Nothing You Can Do.”

The album comes full circle—as did LeMay, who now lives back in Nashville. It ends with “Just So,” a song about a peaceful morning spent happily in love. “What I said will not change,” he sings, managing to imbue something with a sense of permanence.

Joseph LeMay: I started playing music when I was five or six. My dad taught me a few chords on guitar, I started taking voice lessons, and I got really into the drums. I always wrote little songs in my head as a kid, but I didn't play a song of mine in public until fourth grade. It was this kind of vague apocalyptic thing with this C-Cmaj7-C7 thing. I was so proud of it, but in hindsight I probably ripped off Sixpence None the Richer's "Kiss Me" for it.

JL: Different parts of a song or stages in the process call for different methods, as do different writing circumstances. For instance, if I'm writing purely out of inspiration, it's common for general melody, lyrics, and themes to come together simultaneously in a sort of subliminal way, especially at the top of the song. But in a co-write situation, often times towards the end of the song (V3/Bridge), you might need to take a more conventional and/or methodical approach. In those situations, where melody and theme have been established, finishing the song becomes a matter of trying out different lyrics or phrases in spots until you find the right piece.

ST: I read that you left Nashville and moved into the trailer featured on your album cover. What caused you to leave the city?

JL: Yeah, that was our first home really. We were tired of living in the city, and needed to shake things up. We left pretty quickly actually, and we stayed on the farm for the next two years.

ST: Was Seventeen Acres recorded in the trailer or in a studio?

JL: Most of Seventeen Acres was recorded in my in-law’s cabin across the road from the trailer. We recorded strings, percussion, and final acoustic guitar/vocals in Chad Wahlbrink's home studio in Nashville.

ST: Who played with you on this album? How did you meet them?

JL: I met Noah Denney (drums/bass) and Ben Jones (upright bass) during a 24 HR Records session in February of 2013. I met Caleb Hickman (keys, steel, banjo) on my first day of college at Belmont University. I knew of Juan Solorzano (electric guitar) through Caleb, but I never met him until he came and stayed with us at the farm for a week in April 2013. He was working some odd jobs around there making some cash between Night Beds' tours. I met the rest of the bunch (Eleonore Denig, Molly Parden, Austin Hoke, Chad Wahlbrink) through random connections and good fortune over the past five years or so.

ST: You self-produced Seventeen Acres—is it hard to be your own producer?

JL: Yes. When working with any producer or artist you have to learn how to communicate with one another, when to trust the other's judgment, when to not back down. However, when you’re both the artist and the producer these things happen internally, and it can be hard to know who’s needed at what time. But if you can find the right balance, it's a dream. It's important to surround yourself with players and an engineer that speak your language. It really helps having people around that can assure you or offer a different perspective when you get overwhelmed or confused.

ST: Were there any particular struggles you had when figuring out how you wanted things to sound or sequence?

JL: The entire process was a struggle, but that's the idea, you know? Each step of the way you have a sound in your head or at least an idea of a feeling you want conveyed by a part or sound, and you have the task of taking that sound/idea in your head and figuring out how to make that happen on the track. That’s a struggle in and of itself. And because there are so many possibilities, what was the "right sound" or the "perfect part" yesterday, might make you cringe tomorrow. But you have to view the struggle as a refinement process. Even after you get the right idea, it can still be sharpened and aligned or perfected. Then you have to decide when to stop, and that's an even harder struggle.

ST: If you could get one singer to record one of your songs, who would it be?

JL: Geez, I don't know who’d wanna sing them! I suppose I'd like to hear what Mikky Ekko could do with one of my songs.