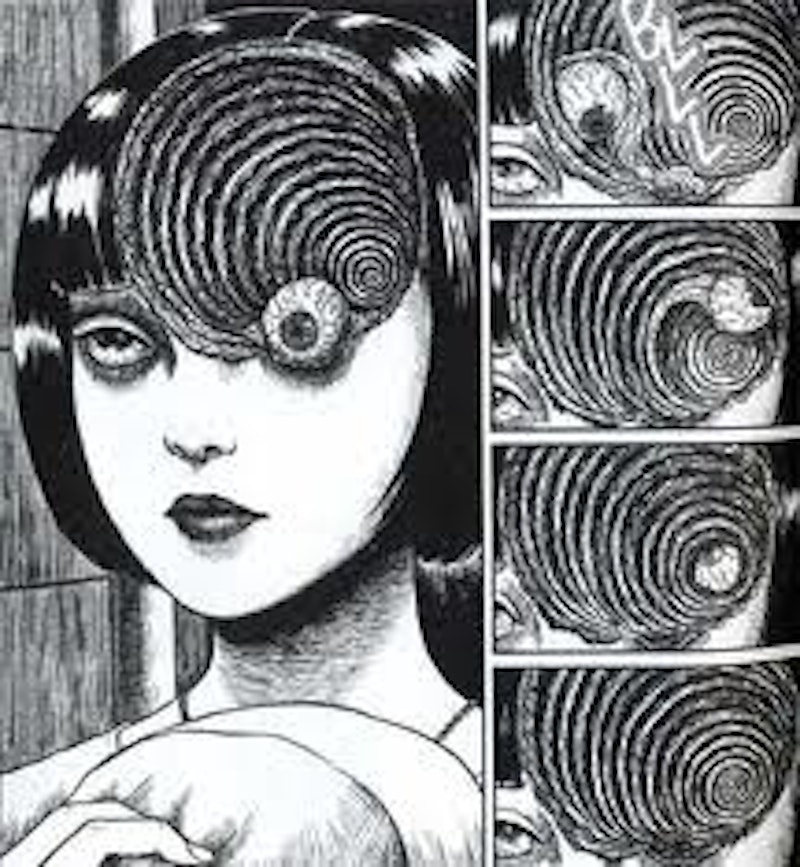 Judging by Joseph Henaghan's blog, he is something of a musical-project slut, lending a discordant guitar to assist and enable any and all comers. What makes Henaghan unique, in my eyes, is that downloadable evidence of his every creative entanglement surfaces on archive.org, that steadfast outpost of random modern obscurity and ubiquity. His motto—“I will make sounds that melt your head”—should tell you everything you need to know, though it is recommended that you give his oeuvre a test drive to get a cursory sense of what he’s capable of.

If you don’t have time for that, just grab the 30-minute long “Pupa,” which Henaghan cut with Bryce Brushnefski, another guitar interrogator of unusual sensitivity and tenderness, as Lantern. The discordant fruits of the duo’s musical union are blowtorch subtle, with a great deal of atonal parry, holler, and heave: sometimes the point seems to be cock (rock)-measuring blunder, sometimes there are wonderfully wrongheaded and tinnitus-enabling attempts to escape Earth’s orbit, sometimes they appear to lose consciousness altogether, and then sometimes both determinedly uncouth axmen seem to be feeling their way blindly through a cruel, unforgiving world free of guideposts, mood stabilizers, and clean amplifier tone.

What I enjoy, though, is that as much as Henaghan and Brushnefski are making “Pupa” up as they go along, there’s a self-cannibalizing hook/motif at the core of this white-hot navel gaze that offers the listener something of a sonic signal light to follow through to the light at whatever k-hole they’re leading you into. I stop just short of using the phrase “idiosyncratic sonic signal” because either these dudes are serious mid-career Dead C. stans or I stumbled into the mother of all coincidences.

What if you lived in the same town with someone who used to be your best friend—you were blood tight, you got each other—but then you just weren’t anymore, but you still continued to live in the same time over a 10-year stretch? What if occasionally you ran into each other around town while doing errands, and just exchanged long, baleful stares, and it was painfully awkward? This is Microphones/Mount Eerie principal Phil Elverum and me in a nutshell.

Since right after the release of 2003’s Mount Eerie—the point where he stopped being the Microphones and evolved into Mount Eerie, or whatever—I haven’t been able to take Elverum seriously. But brother, I have tried. I have tried. When I say that I can’t recall the names of various Mount Eerie albums I’ve forced myself to listen to, I’m not trying to be too-cool-for-school; I can’t remember because almost nothing on any of those various albums made much of an impression. Elverum’s post-Microphones mission seems to have been to erase almost everything that was interesting and attractive about his songwriting, and he’s been mostly successful.

Given this context, “House Shape,” from Clear Moon, feels at least like a minor victory: two minutes head-bobbing synth throb, then two minutes synth head-bobbing throb with a murmuring Elverum doing that standard-operation-procedure by unmistakably Elverum thing where he overanalyzes the elements of humanity most of us take for granted in a relatively unassuming way, all in service of a core melody you’ll wind up humming to yourself two weeks from now while at the service station, even if the actual words escape you, even if the title’s a blank.

As conceived by rapper A$AP Rocky and producer Hit-Boy, “Goldie” is a rope-a-dope of lame left hooks and eerie synth arpeggios. It’s defiantly extroverted in nature: a ricin-laced mash note to naysayers, the 2012 equivalent of Nas and Puff Daddy’s “Hate Me Now,” a panorama of arrogance and pleasure crafts and meaningless sex punctuated by syrup-slowed chorus chatter with a defined beginning, middle and end. Carl Cordova, C.F.C., fittingly, is his stage name, saps the original of all swagger and sinks into a wasted mania. Suddenly everything’s blunted and open-ended and unfiltered: random thought begetting random intimation begetting random manifestation of id with no continuity in terms of inflection or tone, as though Cordova spit off the dome for hours at a stretch and then painstakingly X-Acto’d his brainstorming into a spastic mental mosaic.

Everything’s up for grabs here—monogamy, family-tree climbing, the smoking of prodigious quantities of weed, snatches of meditative philosophy, even the paying of lip service to “living in the fourth dimension”—with each idea teased then sidestepped or jump-cut in favor of another, everything espoused in a sort of stoner’s bedhead brogue. “I’m a scientist, in and out of labs,” Cordova yawns, and it’s easy to imagine his version of “Goldie” unfolding almost in perpetuity, the flavored synths pinging in series and illuminating the storm clouds in his mind like lightning bolts. His is a song that never ends.