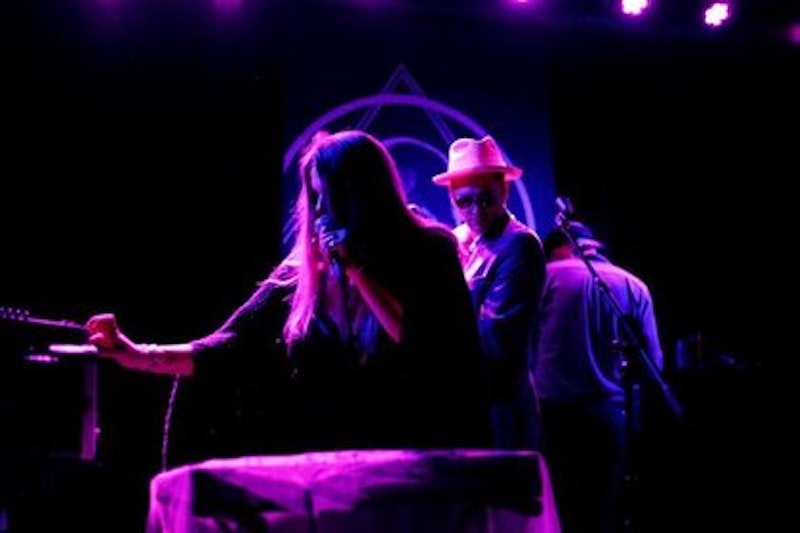 In suburbia, the fence is a mostly a monolithic, uninterrupted thing: slab of wood after slab of wood after slab of wood from one edge of the rear of the house to the other, affording nothing to outsiders or the insistently curious. Wrought-iron or chain-link fences are altogether different things. Excepter—whose loop-based electronic bop is beginning to appeal to me for the first time in a half-decade—has titled the second song on its new The Stand EP “The Fence,” though they might have done better to title it “The Forcefield.” There is a very palpable sense of entering into or being drawn through a deep barrier, inch by inch. This barrier is, or should be, impenetrable, and yet there you are, conquering a mantra-esque miasma crying out for wanton remix action: those twitchy, rustling percussive facsimiles, those dizzying synth semi-circles, those sickening spikes of static. The further in one drifts, the greater the compulsion to dance, or at least to daydream of stoned, pirate-radio dub sessions. The grass sure isn’t greener back where we began.

The last time I fully gave myself over to a record with titles this portentous was back in 2003, when Phil Elverum, recording as The Microphones, gear-shifted into his Mount Eerie era with an album named Mount Eerie. Like Mount Eerie, Dag Rosenqvist’s new Fall into Fire is concerned with the corrosion of or imposition upon silence, which means there are a lot of moments where the listener gets lost, happily, in an extended drone or textural quaver, before being shocked back to consciousness. Inevitably, the odd intermission or segue surfaces; “The Flood, Pt. 1 – Veins” is one of these.

On one of my favorite cuts (the shortest) from Yellow Tears’ The Pissmop LP, a small lake’s worth of fluid is quickly drained. Conceptually, “Veins” is apposite to this approach. At the outset there’s what seems to be a field-recorded whoosh, as if “Play” had just been clicked on a tape deck in some wind-swept pasture. From this emerge the tendrils of a melody, sounding with all the clarity of a 20th-gen VHS copy—sloppily pitch-shifted, blurrily iridescent, gales blowing through the chords. Through the track’s 37 seconds, the volume level climbs rapidly, and just before “Veins” concludes, claws leap out of the pixelated reverie. It’s like staring into a sewer as a fireball explodes up at you but being unable to move quickly enough to avoid incineration, while somehow being denied the experience of incineration itself.

The truth about 50 Cent, as understood by everyone now living who is not 50 Cent, is that there is no actual desire for more 50 Cent music. It’s effectively over, and has been over for quite some time. This state of affairs is a painful one, since there was a time when 50 Cent was truly ascendant—when Fitty albums and singles and guest spots were true events. And, sure, it’s not like music is all the man does now, or aspires to do: he acts, he executive produces, he invests. But rap was what brought him to prominence, and he refuses to either stop rapping or acknowledge that maybe it’s time to hang up the microphone, and so 50 Cent fandom post-Curtis has become an exercise in celebrity psychology. Does 50 Cent continue to rap because he believes it’s what God put him on Earth to do? Does 50 Cent really believe that his contemporary contributions to the hip-hop canon are essential? Or—as I like to imagine—does 50 Cent secretly recognize that his fall-off is real and desire to reclaim his throne so he can leave the game with his head held high? “Hustler,” from Animal Ambition, is not “In Da Club” or “I Get Money” or even, Heaven help us, “I Just Wanna.” It’s not equal to the “I’m a Hustler, Baby” of Jay-Z, the tagline of which 50 Cent jacks without blinking. But it does make for a diverting trifle of mythology-burnishing over a Jake One beat that suggests a rack of synthesizers hyperventilating in the basement beneath a laser-light show. “I stack paper like I’m trying to fix the national debt” aside, the sentiments are banal, and the inclusion of one of those idiotically growled, ingratiating outros doesn’t do anyone any favors. But the wordplay isn’t the point; the point is 50’s tone, something startlingly akin to the louche, reptilian confidence that made so many of us love to loathe the guy. He could be rapping a Whitney Biennial catalogue—which, hmmm—and “Hustler” would still sound dope blasting from car speakers in an alternate universe where car speakers weren’t almost uniformly blasting Migos.