Albert Goldman’s hatchet jobs weren’t without merit at the time. 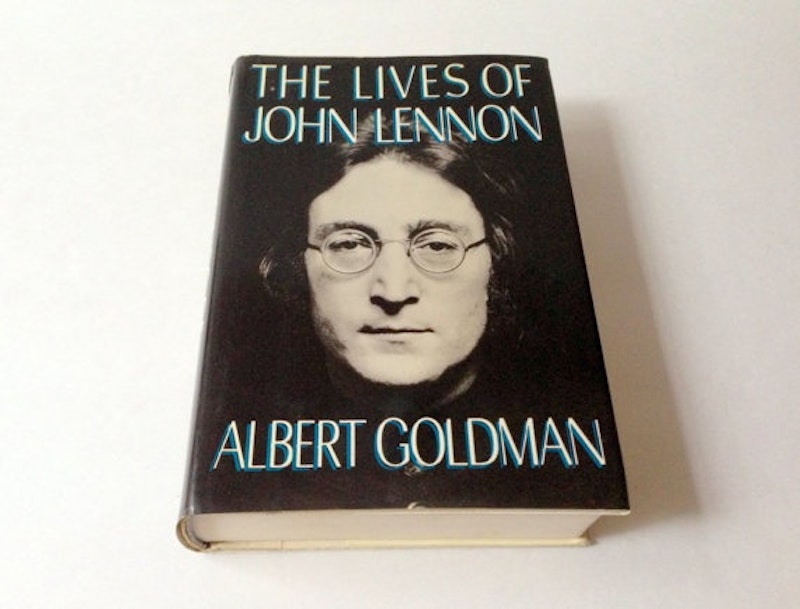 Albert Goldman infuriated the Western world in the 1980s with two biographies: Elvis: the Last 24 Hours (1983) and The Lives of John Lennon (1988). Both are hatchet jobs and say more about the author than the subject. Goldman was obsessed with sex and drugs, and the way he talks about homosexuals and Lennon’s infamous holiday with Brian Epstein, it’s obvious that he was a Larry Craig character, and somehow managed to avoid being caught with a dick in his mouth in a truck-stop bathroom before he died in 1995. Goldman’s sexual frustration oozes out of every page, even when the subject is completely unrelated: early on, he describes the Beatles’ transforming into “the Four Little Dildos” as their concerts turned into circus attractions.

He’s a disgusting bigot and classist as well, referring at one point to a hi-fi stereo system as reaching “inner-city volumes.” Yoko Ono is painted as a vile succubus—not a unique opinion—but Goldman continually denigrates her simply for being Japanese, or “Oriental” as he says (there’s a chapter called “The Rennons Buy a Lenoir”). Most of his books are out of print and he’s forgotten, or erased from the culture, because watching news reports and interviews from the time, it’s surprising how openly everyone hated this man. But not for his blatant bigotry: the “most shocking” claim, according to a contemporary Dateline NBC special, was the affair with Epstein. Seriously? That’s more shocking than Lennon’s well-documented spousal abuse, or that he chucked his cats around the Dakota during his Howard Hughes phase? The blatant bias against Goldman in the piece is loud and clear from the beginning. That’s not what’s disturbing: Goldman was clearly a bitter, hateful and jealous voyeur, a man deserving of his reputation, but NBC, and this British daytime special (YouTube title: “Albert Goldman gets abused on live TV") are something else.

The Lives of John Lennon came out in 1988, when major artists and celebrities were able to maintain public images and messages that were entirely at odds with their personal lives and behavior. People at the time were not mad at Goldman for being an insecure closet-case with a deep-seated racism and classism in him: they refused to believe that the myth of John Lennon the martyr and Elvis Presley the king were carefully constructed lies. The idea that Lennon and Ono would plan how they presented themselves and their marriage to the media was practically blasphemous, and the lurid truth, that Lennon spent his last five years as a reclusive anorexic chain smoking French cigarettes, downing 30 cups of espresso a day, and snorting heroin and cocaine, was just impossible to take. This was a guy that was literally deified: after his murder, millions of smart people sincerely wondered, “How will we go on without him?” There’s an excellent and haunting documentary available on YouTube called Lennon/Goldman that’s about as measured, artful, and dignified as it gets.

Rock critic Bob Spitz refutes the notion that bypassing “primary sources” like the other three Beatles, Ono, and Lennon’s family leaves Goldman with a heap of hearsay. “These people… must protect their own history, and their history as John Lennon’s friend. That’s the only thing that matters to these people, it’s what’s printed on their card.” Spitz witnessed Lennon tossing lover May Pang around the room and beating her relentlessly backstage at Madison Square Garden, causing such a scene that Elton John had to have Lennon removed. You think Elton is going to say shit about this? It’s obvious that Goldman embellished and sought out the evidence and the muddiest banks to support his own prurient fantasy of the man, but by now, Lennon’s heavy life-long drug-addiction, domestic abuse, and private insanity have been well-established.

Books like this don’t come out today because there’s no need for them.

Never again will an artist in the popular culture become infallible, because there are too many eyes and ears everywhere. Being at the top of the mountain, jealous hatchet job hacks are inevitable. What’s striking is how hard the Beatles organization, the rock press, and the media at large fought to discredit Goldman and his book, and how successful they were. Yes, as Rolling Stone pointed out at the time, there are many mistakes: “Love Me Do” is incorrectly identified as a 78 rpm release, and in a photo from the Maharishi retreat, George Harrison’s wife and Paul McCartney’s brother are captioned as “unknown male and female.” He gets song titles wrong, but barely touches on the music: Goldman is obsessed with Lennon’s drug addiction and his sexual activity, describing in delicious detail all the underage girls he had and the pre-teen boys he encountered in Thailand. I mean, Goldman is practically salivating, and if you watch any of the above interviews, the gaydar goes off the charts.

The Lives of John Lennon is worth seeking out for gore whores and anyone who loves juicy rock bios. Compare it to Charles Cross’ authorized bio of Kurt Cobain, Heavier Than Heaven, which is just as lurid and full of descriptions of Cobain zombified by heroin and acting contrary to his public image as the tortured, sensitive, and reluctant recipient of the crown. It’s fascinating to see how just 25 years ago, people were still so invested in their idols and the myth they created. Now that that’s basically impossible (Bryan Singer getting caught soliciting young boys, James Franco on Instagram, Zac Efron getting beat up in a crack house), these sorts of books aren’t necessary. Back then, slugs like Goldman did serve a purpose though: to bring these people down to being people again, because those myths lead to crippling and poisonous thinking, like “How will we go on without him?”