The prolific rapper is sitting on a mountain of unreleased material. 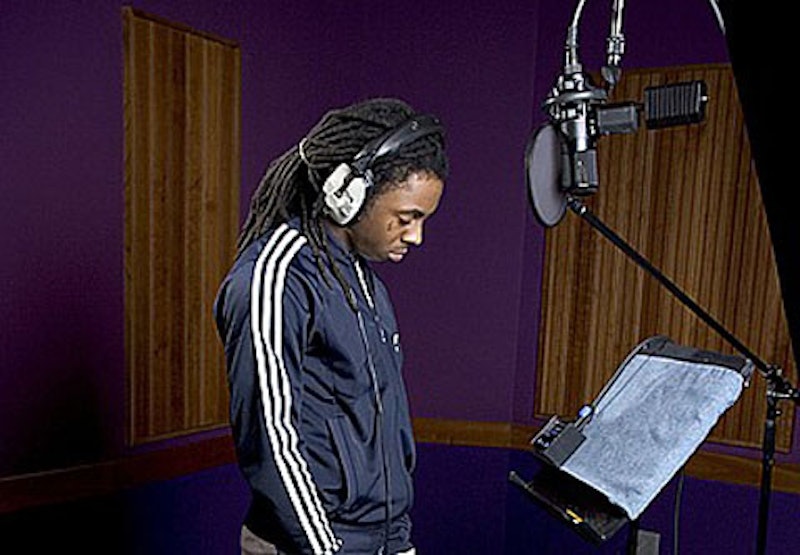 If there’s any lesson to be learned from Lil Wayne’s career, it’s that there’s no such thing as flooding the market in hip-hop anymore. In the mid-00s, the Cash Money rapper who’d first tasted fame in the late 90s as a teenager came back bigger than ever with a deluge of mixtapes and guest verses that had made him a superstar by the time of 2008’s Tha Carter III. In the last two years, he’s released three solo albums (in addition to keeping pace with mixtapes and collaborations), despite the fact that he spent 10 months of that time in prison. In 2011, over 50 songs by or featuring Lil Wayne appeared on various Billboard charts, including every song off of his latest album, Tha Carter IV.

The amazing thing about Lil Wayne’s prolific output, however, is how much more music he’s intended to release but hasn’t. As his status has steadily increased, he’s left in his wake a dense catalog of announced but uncompleted or unreleased albums and mixtapes. In recent months, some new ones have been promised and some old ones have been put back on the table or permanently shelved. So I thought it’d be a good time to take stock of all of those projects, and evaluate their odds of being released in 2012:

It’s a sign of how quickly Lil Wayne became one of the biggest stars in the world that just a few years ago, he was considered enough of an equal to the middling Cam’ron sidekick Juelz Santana that this duo project seemed like a good match. Many of the initial collaborations the two recorded back in 2006 after first announcing the project were quickly leaked on the mixtape circuit, which led to the idea of an official retail album release being scrapped. Or so it seemed: last fall Santana signed to Wayne’s Young Money label with a rebooted I Can’t Feel My Face planned as his first release with the label. Odds of a 2012 release: 40%

In late 2007, Wayne was still in the thick of the protracted two-year run-up to Tha Carter III, constantly recording and discarding songs for the hit album that was ultimately released the following summer. One of the unreleased tracks earmarked for the album, Hello Brooklyn, was remixed as “Hello Brooklyn 2.0” for Jay-Z’s American Gangster album. Soon after, there was talk of a Wayne mixtape of the same name, featuring more versions of the song and collaborations with various other rappers from the New York borough, and freestyles over various Brooklyn rap classics, hosted by Mick Boogie. But as the song’s short-lived buzz petered out, the Wayne solo track and the companion mixtape never surfaced, and were virtually forgotten by the time Tha Carter III dropped. Maybe someday a DJ will unearth the mixtape and leak it to the Internet, but chances are very little of it was ever completed. Odds of a 2012 release: 5%

In 2008, everybody in pop music was mimicking rappa ternt sanga T-Pain’s AutoTune vocal style, especially Wayne. The two became fast friends and appeared on each other’s singles (Wayne’s “Got Money,” T-Pain’s “I Can’t Believe It”), vowing to record a whole album together as a duo. Although they’ve appeared on each other’s latest albums, and T-Pain recently signed to Wayne’s Young Money label, the project seems no closer to become a reality after three years in the pipeline. T-Pain even shot down the chances of it happening anytime soon in 2011 interview. Odds of a 2012 release: 12%

Another “best of both worlds” R&B collaboration that was proposed after Wayne appeared on Lloyd’s hits “You” and “Girls Around The World” that probably never had much chance of really happening. Odds of a 2012 release: 0%

Back in the late 90s, Lil Wayne was just one among many Cash Money rappers, and a member of the label’s flagship supergroup. But in the ensuing years, the other three Hot Boys, Juvenile, B.G. and Turk all left the label amid gripes about unfair contracts and label head Bryan “Birdman” Williams hoarding all the profits. As Wayne’s star rose and he became far more famous than his old friends, there was briefly talk of the old gang getting back together for one more album. Three-fourths of the group even did a song together as recently as 2009, with Wayne and Juvenile appearing on B.G.’s “Ya Heard Me,” but after that brief show of unity, they seemed to go back on their separate paths. Odds of a 2012 release: 1%

After the mass exodus of the other Hot Boys, as well as super-producer Mannie Fresh, Wayne and Birdman were left as Cash Money’s only two familiar faces left on the label, Wayne embracing his label boss and mentor as a father figure (or perhaps more, as many left uncomfortable by their kisses and shows of affection were prone to speculate). Despite the odd dynamic between them, they worked well together; first joint album, 2006’s Like Father, Like Son, was a stopgap release meant to whet appetites while fans waited for Tha Carter III, but was a solid album in its own right, featuring Wayne at the peak of his rhyming ability. Since then, Birdman has continued to make solo albums dominated by Wayne guest verses, but another duo album has long been waiting in the wings. It’ll probably happen at some point, but not this year, with a new Birdman album, Bigga Than Life, on the horizon. Odds of a 2012 release: 8%

A few years ago when Lil Wayne was becoming the most successful mixtape rapper of all time and DJ Drama the most successful mixtape DJ, the early volumes of the Dedication series had a lot to do with that. After a couple years in which the two appeared to be on the outs, Drama announced a fourth volume in 2010, which didn’t materialize at the time, and probably won’t at this point. Odds of a 2012 release: 20%

Label compilations tend to be fairly undistinguished filler projects in hip-hop, but the first album from Wayne’s own Cash Money offshoot, 2009’s We Are Young Money, was a different story: it featured two hit singles, “Every Girl” and “BedRock,” and helped launch the careers of Wayne’s two platinum protégés, Drake and Nicki Minaj. With three established superstars now on the label’s roster and a half a dozen less known artists Young Money is still trying to introduce to the public, a second compilation sounds like a pretty likely proposition for this year. Odds of a 2012 release: 65%

At one point Wayne and his Canadian buddy were discussing the possibility of recording a whole album as a duo. But on the heels of Jay-Z and Kanye West’s Watch The Throne, Drake downplayed the idea of that happening anytime soon, seeming afraid of the inevitable comparisons. While they’ll surely collaborate on dozens of songs this year, they’ll likely be on the Young Money compilation or various solo projects.

Within weeks of Tha Carter III being crowned the top selling album of 2008, Wayne made an announcement that seemed destined to bring him tumbling down from that peak of popularity: he was making a rock album. Since 2006 he’d been frequently seen in videos and onstage listlessly plucking an electric guitar that he didn’t seem to have any motivation to master as well as he’d perfected his craft as a rapper. After the world unanimously rejected the horrendous lead single “Prom Queen,” Rebirth was bounced around the release schedule until finally being released in early 2010. And the sad, funny thing is that it actually sold pretty well, debuting at No. 2 on Billboard and going gold, despite horrid reviews and no hit singles. And so, as Young Money president Mack Maine announced in late 2011, a sequel to Rebirth is in the offing. One would hope consumers won’t fall for the same trick twice. Odds of a 2012 release: 30%

Around the same time that Wayne decided to make a rock album, he also talked up an R&B album. And while he’s now recorded countless songs in which he’s crooned in AutoTune, including a few major hits like last year’s “How To Love,” he never seemed to serious about dedicating an entire album to that side of his music. Odds of a 2012 release: 4%

Lil Wayne—I Am Not A Human Being 2

Like Rebirth, I Am Not A Human Being was a 2010 album that operated more as a stopgap between editions of the Tha Carter series than a full-on album. Also like Rebirth, it sold surprisingly well despite being inessential almost by design. Mack Maine announced its sequel in the same breath as Rebirth 2, but the odds of I Am Not A Human Being 2 happening seem much higher, since it’s such a low-risk proposition with guaranteed profits and smaller odds of inspiring a backlash than another Rebirth. Odds of a 2012 release: 80%

The day after Tha Carter III notched an impressive million sales in its first week, Lil Wayne recorded a remix of his hit “A Milli” in which he flashed forward a couple chapters in his series of albums, musing, “Can you Carter Five?” After Carter IV proved that the franchise can still do blockbuster numbers, the likelihood of it continuing is very high, but given the way he’s been spacing the albums three years apart, it probably won’t happen until 2014, especially with all these other potential projects still hanging in the air. Odds of a 2012 release: 10%