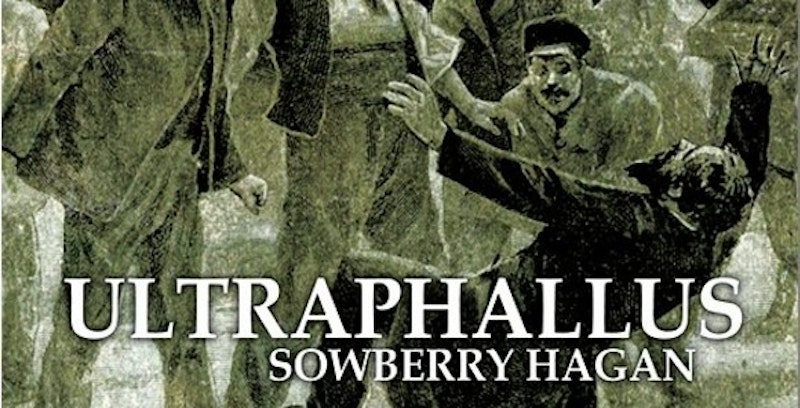 Ultraphallus has to be one of the best band names I’ve heard in a long time. So good that I may have set my expectations for Sowberry Hagan, their recently released third album, too high.

Which isn’t to say the album is bad. On the contrary, it’s solidly okay. Ultraphallus appears to have come out of Belgium by way of Seattle; their trudging metal noise is heavily inflected with grunge. “Pathological Freemind Verse” could almost be by the Melvins, with its grinding and muttering and drum beats dropping like felled brontosauruses (though, admittedly, the drummer here does not fell brontosauruses like Dale Crover fells brontosauruses.) “Right Models” is more swaggery, encroaching on Soundgarden territory, while “River Jude” has some of the gargantuan testosterone of Dickless—though even without the dick, those ladies had more fearsome equipment than these gentlemen are ever likely to dream of.

Just to show they’re not above a little eclecticism, Ultraphallus wanders away from the grunge template for a couple of songs: “The Crumbled” is a nice, albeit short, banjo number; “The Red Print” is a Nick Cave tribute, complete with theatrical wailing and ominous Old-Testament-via-Bob Dylan lyrics: “it rains on the just and the unjust alike/when I shift onto my side/the face of your sorrow/stretches out long and lean.”

So that’s kind of the album: lots of familiar moves, performed with aplomb if not any particular genius. Hearing it made me want to go back and listen to Dickless and the Melvins and Nick Cave. It even made me think about going back to Nirvana again, which is a moderately impressive feat. I loved Nirvana with all my heart back when people were loving Nirvana with all their heart—but I semi-permanently OD’d on them years ago.

A band named Ultraphallus should be something other than a decent imitation of a bunch of great bands, shouldn’t it? You’re called Ultraphallus, you should be out there proving it all night every night.  You should be the James Brown of metal.

But Ultraphallus is a name that makes it sound like you’ve actually got the best phallus in the room. Like you might contemplate using that phallus to have sex. For metal, that’s all wrong. In retrospect, it makes sense, I suppose, that a metal band calling itself Ultraphallus would be (a) grunge (a subgenre which has some swagger) and, (b) only so-so.  If Ultraphallus ever undergoes a transformation and starts playing funk though…I’m getting that album.