MySpace's redesign last fall ruined the only thing the site had going for it: functional band pages. 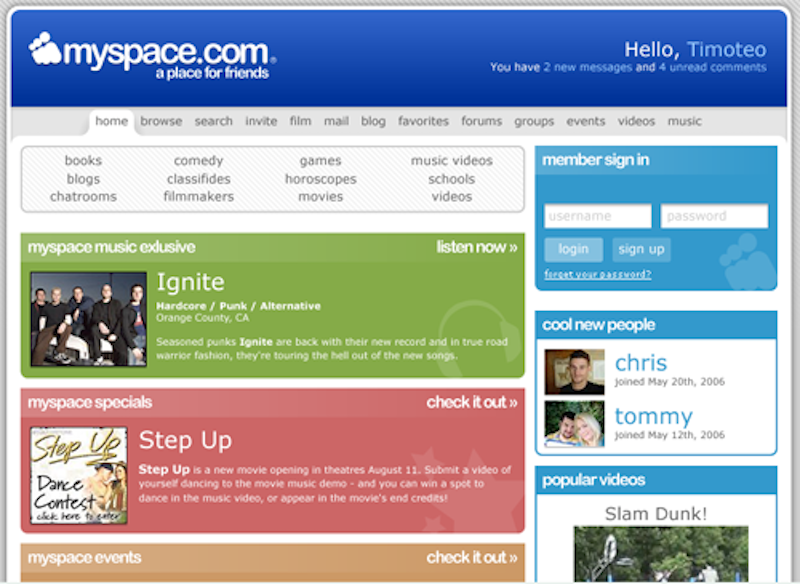 Mentioning MySpace to those who once used it often recalls a few things: overwhelming and malformed HTML, bloated site design, and insidious feature creep. While very few bemoan the rise of Facebook over MySpace for personal pages, a key part of the site, something that kept people on the site for a long time, is basically lost now: the band page.

MySpace went through a wholesale renovation and redesign last fall that no one noticed or cared about. What was supposed to be a re-birth was instead the final nail in the coffin of that bloated, gassy beast. Not only did the designers somehow manage to make the site uglier and more confusing, custom HTML was automatically wiped across the board. Every page now looked exactly the same: a dead body, gray and black, overflowing with buttons, functions, calendars, reminders, "apps," a social media speedball. For about three or four years, it seemed the only people who used MySpace anymore were bands and musicians, and I also kept one up. It was a nice resource: a basic website, show listings, songs, and announcements all in one place, for free, with a customizable interface. It wasn't great but it worked fine. The desperate redux on the site no doubt turned off more people than it enticed, and while it’s almost a relief that MySpace has finally been rendered obsolete, nothing so far has come to replace it.

I know: Bandcamp and Soundcloud, and while these sites are great for selling and putting up music, they lack basic functionality. It's just about putting music up, and without text posts, announcements, or show listings, you're reduced to an MP3 machine, not an active musician. Bandcamp just recently introduced show listings, albeit through a separate site, Songkick, another bloated and ghostly social media venue. I wouldn't write this if Soundcloud or Bandcamp would do the easy thing and add a blog feature or something, any kind of tool that allows you to post words. Lacking the ability to post news, writings, ramblings, or show listings, you're spitting songs out into the void with little context or clarity.

And honestly, I miss overloaded MySpace pages. Abundant GIF's and obnoxious color schemes just have more personality than the cutesy and plain Soundcloud. Tumblr's okay I guess, and that'll probably be what musicians use for central portals. Something to think about though: even in the wake of Facebook and Twitter, there are still 18 million people who actively use MySpace. Perhaps they're browsing the distorted digital graves of bands and peoples' past. Or maybe they're just taking more selfies in the mirror.