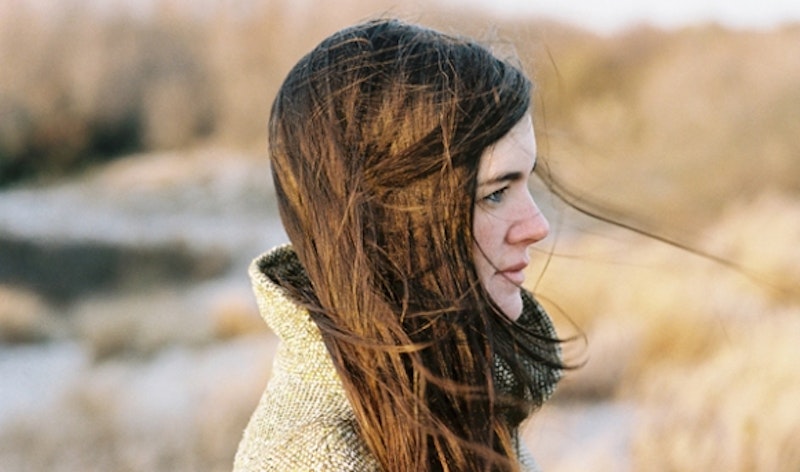 One of my favorite recordings is the Hilliard Ensemble’s CD of Perotin’s vocal music. Perotin was a 13th century composer; he’s perhaps the most important pioneer of polyphonic music. In contrast to earlier Gregorian chant, which followed a single melody line, Perotin’s compositions weave, and elongate—time stretches as syllables are pulled out and the voices detach, rising up and rushing down, harmonies wrapping into supple crystal knots. The comparison with cathedrals and their flying buttresses is inescapable; monumental structures which seem to lift miraculously up to heaven. God is as dense as stone and as light as air; His creation is so solid it flies.

Juliana Barwick clearly is a fan as well—or, at least, I’d be surprised if she hadn’t listened to a good bit of medieval choral music at some point. Like plainchant, her songs are obsessively focused on the voice, albeit multi-tracked and abetted with keyboard plinking in her case. The tracks on her latest release, The Magic Place, all slide into each other in a long, slow dream of echoey inhalation and exhalation. As with Perotin, the melodies rise and crest, pushing upwards off the earth towards an explicit transcendence.

The exact nature of that transcendence, though, is a little tricky. I was once discussing the K Records sensation Mirah with a good friend, and he observed acidly that her songs always begin with the sound of the singer taking a breath.

It hurts because it’s true; for Mirah, as for Barwick, the breath, the sound of the voice singing or not, is fetishized. The music attempts to dissolve the body or self in a New Age pantheistic rapture of oneness. But it doesn’t reach outside the self; rather it pumps the self up in an excess of steroidal tweeness. You can hear this in Barwick’s “White Flag,” which, with its repetitions and polyphony, can sound almost like a Perotin number. The difference, here, though, is that the main dynamic tension of the track is provided not by the composition, but by variation in volume. As in the Rolling Stones’ “Sympathy for the Devil,” different elements are added and looped as the song unfolds; Barwick starts at a whisper and hits an almost painful loudness by the midway mark. Then things disperse again, fading out towards the end. The human voice, technologically multi-tracked, fills the world and then breaks down into nothing. In contrast, the end of “Viderune Omnes” ends as solidly as it began; it does shift to monophony for the last bar or two, but the feeling is of an anticipated and gentle rest, not of dissolution.

In Perelandra, C.S. Lewis comments at one point that what “Pantheists falsely hoped of Heaven bad men really received in Hell.” For Lewis, dissolving isn’t a rapture, but a nightmare; a kind of final, self-immolating triumph of the ego, which in its longing to be everything swallows the world, blotting out the difference between it and other and so turning itself into naught.

There’s a way in which listening to Barwick, then, is less like listening to Perotin, and more like listening to, say, Darkthrone or Emperor. In black metal’s raspy shrieks, there’s a similar emphasis on voice stripped of personality, the celebration of generic life rather than of a particular human. Black metal is also, fairly explicitly, the flip side of Barwick’s gentle paganism—the universe tearing you to pieces and devouring you rather than gently unfolding to dissolve you. Either way, though, the point is a self that vanishes, whether into a chorus or a hail of knives.

Perotin’s apotheosis is different. God in polyphony doesn’t blot out personality; he uses it. At the beginning of “Sederunt Principes” some of the intervals are close to microtones, creating shimmering, rapturous echoes. Yet each voice is still distinct. Individuals are still individuals. It’s just that, in the structure of their communal effort, there’s something else—an additional spirit. In comparison with that mysterious presence, Barwick’s Magic Place seems mundane, no matter how much of herself she puts in it.