A Few Too Many Hits of Christmas Cheer, Pt. 2 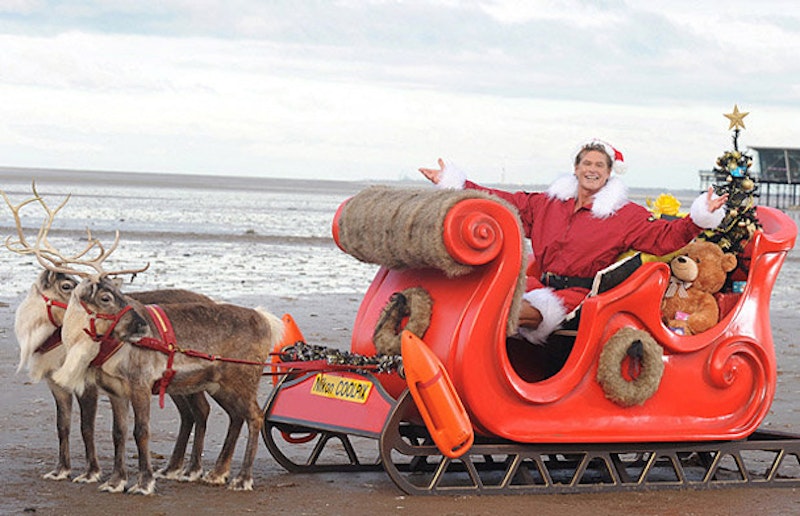 There aren’t many songs that have the effect of becoming more uncomfortable the more one is exposed to them, but undeniably, “Baby, It’s Cold Outside” is among them. The melodious interplay between Shore’s voice and Clark’s is the tune’s sole redeeming quality, the timbres rubbing up against one another like a cricket’s legs. In this, the original and official version, Shore musters enough feigned allure that one could charitably read romance into the performance, but subsequent covers paint a more litigious picture, and “what’s in this drink?” translates as lecherous in any era. I don’t imagine that there’s much merriment in whichever of his homes Bill Cosby and his family are celebrating the Christmas holidays this year, but maybe some thoughtful relation gifted the erstwhile Dr. Huxtable with an iPod containing all 001 versions of this song—one for every woman he drugged and/or assaulted.

Perhaps you weren’t aware an album of David Hasselhoff Christmas standards exists. Well, it does, and not only is it worse than you might have imagined, but the Hoff delivers a punchy reading of “’Twas The Night Before Christmas” that will forever ruin “’Twas The Night Before Christmas” for you and anyone who happens to be nearby. Conveying condescension, drunkenness, sarcasm, smarm, and impatience simultaneously is an ability that some spend entire lifetimes trying and failing to master, but the Hoff pulls it off so seamlessly here that it kind of took my breath away. Bonus: the layered reindeer callout, which, given the context, is somehow more ghastly than those scenes in Batman Begins where various characters have been dosed with The Scarecrow’s angel dust potion and Batman or the Scarecrow is screaming into their glazed, tearful faces.

Jacob Miller feat. Ray I, “All I Want for Ismas”

The good news: no need to second-guess what these guys want for Christmas. The bad news: no way to drop by to give them their presents without catching a contact buzz. The ugly news: the alienated will grasp the thesis of “All I Want for Ismas” within 30 seconds, but the song is over in about six minutes, which is nowhere near long enough if you’re partaking and are collapsing into the easy chair next to the huge Christmas tree which isn’t really a Christmas tree, at all. Did Santa Claus leave that new gravity bong? Who ate all the oatmeal cookies? Nobody can even remember now.