Santigold is unclassifiable, but it's easy to see what makes her music compelling. 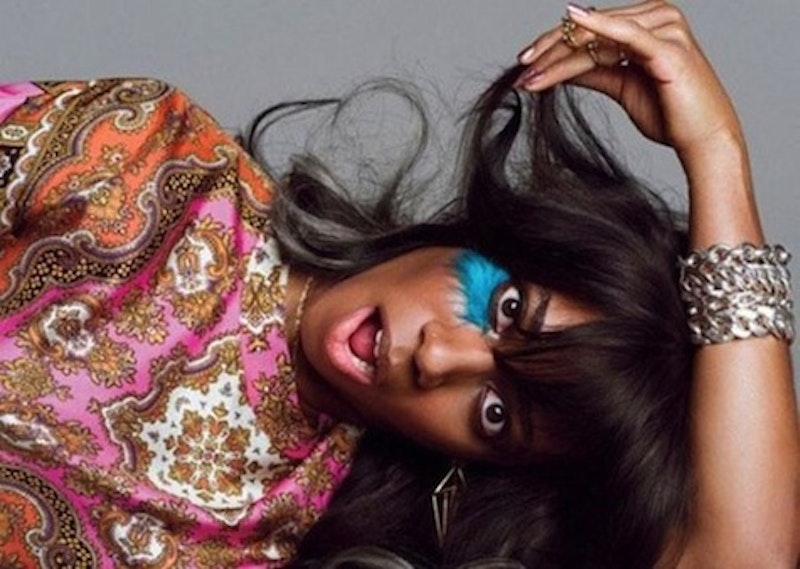 You know you’re a sensation when you can pick up the phone to call Alexander Wang and ask him to design a special look for your upcoming album cover—at the last minute. The vibe you’re going for, you tell him, is Bond Girl. You want to look tough but sexy. Like magic, the next day you have a custom made gold Alexander Wang bathing suit to wear for your cover shoot. It’s a look that, very importantly, nobody else has.

When you’re the indie/new wave/otherwise unclassifiable artist Santi White, a.k.a. Santigold, that’s how you roll.

Santigold recently dropped Master of My Make-Believe, out now on Downtown/Atlantic Records, her first record since 2008 and the follow-up to her debut, Santigold. Lest you worry about her indie street cred, the album features collaborations with the A List of the indie circuit: Karen O., Greg Kurstin, Switch, Dave Sitek from TV on the Radio and Nick Zinner of the Yeah Yeah Yeahs. A campy, lo-fi, animated music video for “Big Mouth” was directed by Cody Critcheloe of SSION.

Since 2008, Santigold has released a mixtape, toured with Bjork, played concerts with Coldplay, Jay-Z and Kanye, changed her stage name from Santogold to Santigold, wrote for Christina Aguilera, opened for the Red Hot Chili Peppers and climbed Mount Kilimanjaro. These are all great feats, to be sure, but what makes Santigold stand out is that she is perpetually, significantly, unclassifiable. This is the same artist who, in 2008, was compared to Kelly Rowland, M.I.A., soul singers, and rap, and put all those genre classifications on blast as racist.

I found out about Santigold while browsing the music listening stations at a Virgin Megastore. I admit that I frequently shop for albums based on the cover art, especially when discovering new music. So I remember walking into Virgin and seeing this purple album with a black girl splashed on the cover, spewing gold specs out of her mouth. “Well, that’s interesting!” I thought. So I gave the record a listen. At the time, if you were a black woman in pop music, you were typically one of two things: a rapper or a diva. Those seemed the only possibilities. Frankly, I wasn’t sure what to expect with Santigold, but whatever it was, it was certainly not what I heard. The first song was “L.E.S Artistes,” and I was immediately hooked on its New Wave, electronic feel that flowed under a low-pitched but shriek-y voice. Next up was “You’ll Find A Way,” and I loved the excited, forward moving, punk rock overtones. I had never known a black artist to make punk-infused electronic music like this, so I already knew I was going to buy the record. Still curious, I skipped ahead to “Creator,” which sounds like it could be the theme song of a Williamsburg-orchestrated hip-hop video game, and I was sold.

Santigold, who majored in Music and African American Studies at Wesleyan, is known for her hybrid, unclassifiable, genre-bending sounds that borrow from dub, dancehall, electronic, and punk. Master of My Make-Believe is not a repeat of her debut. Instead, Santigold stays within the indie soundscape by evolving her sonic language into a range of infectious dance beats, many of them Afro-Caribbean. “GO!” featuring Karen O. is an upbeat track whose bass beat rocks, pushes and pulls back and forth, and reminds me of punk kids banging their heads in garages all over Jamaica, where the record was partially recorded. It’s easy for a song with a title like “Fame” to feel like “sound glitter,” with keyboards, violins, and a whole lot of schmaltz. But Santigold’s “Fame” doesn’t sound like what you think it does. As she sings, “hustle make you high high/hustle make you low,” a hard, Jamaican dub beat brackets the song before the chorus is subdivided by heavy, chopping slams. Stand out tracks like the epic “Big Mouth” show Santigold at her most energetic, and on “Look At These Hoes” it seems like she’s throwing in some hipster hip-hop for gun. The best moment of the record is “Disparate Youth,” a classic Santigold track that sounds like no other song on the record, yet reminds us she knows how to produce the new wave indie/electro sound that made her famous. “Disparate Youth” is slow but the beat skips forward and it is so chill, as chill as “Feel It All Around” by Washed Out, probably known to you as the Portlandia theme song.

Santigold is the primary black indie artist making music today, an important feat for the otherwise lily-white indie scene. In 2009, Jay-Z said that, “What the indie rock movement is doing right now is very inspiring. It felt like us in the beginning.” No surprise, then, that Jay would swoop in to capitalize on Santigold’s popularity; she’s now with Roc Nation. And yet, she’s still managed to maintain the majority if not all of her indie street cred.

What I like best about Santigold is the hybrid blackness of her entire production. She rejects the conventions that dictate what black music can sound like, or what an indie artist can look like for that matter. Yet she does this while also using black art, such as the Kehinde Wiley painting on the album cover, and black visual themes and black sounds. I find this interesting especially since, I would guess, her work is largely consumed by indie-focused white folks in addition to all those afro punks out there. People always say that black bodies can’t sell this or that. Santigold is proof that, in fact, you can do it, and you can do it brilliantly.