The Show Goes On

We've got CD's for sale. They're on the chair. 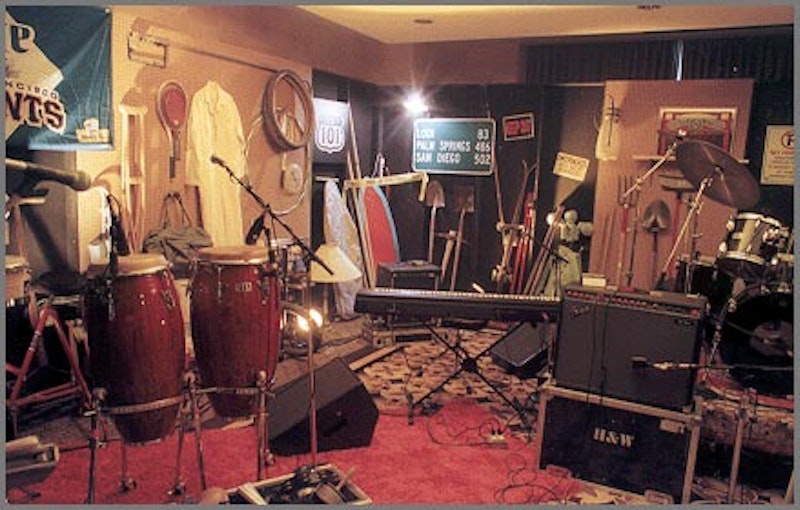 I drove to Beaumont, TX on someone else's whim. Someone else was a total stranger whose genetic letters combined to form the name Chad. Over Lone Star beer, the national beer of the country-state of Texas, it was on an Austin patio that I was informed Chad "knew a guy" in Beaumont. There were about 10 people at the last two shows I’d played. I had heard that there were feral dogs in Beaumont. I could imagine there being more than 10 dogs in the neighborhood of Chad's local connection. "Sounds good," I say. "His name is Greg," Chad says. "I'll give Greg a call," I say. Chad's friend has a name. I like it when destiny shakes hands with nomenclature.

I call Greg the following morning to tell him about my band and the one I'm touring with. Seems like there's something going on at his house that night. However, he does know about a local event that we could play. I agree and hang up. In the five minutes prior to this phone call we didn’t have a show scheduled. Now we did, at a craft fair organized by the owners of a Bahn Mi food truck. The ice cubes in my whiskey at the bar start to melt with anxiety over the future. I ask a waitress in a bikini to serve me another. I like to avoid stress.

It's the next morning all too soon, and I'm in the van again. Beaumont is four and a half hours away from Austin and everyone in the tour van is hung over. Greg sends me an SMS message explaining his whereabouts. "I'll be at a guitar shop I work at. If you need any gear or accessories beforehand let me know." I don't know if I need another rock and roll bass guitar. I also don't know that it's good form to text your sarcasm to a stranger. "Okay. I’ll see you at the venue," I text back. Greg seems nice. Maybe we'll soon bond over the national beer of the country-state of Texas.

Our van pulls up to the venue ahead of time. There's a handful of people with lawn chairs and coolers seated in front of what appears to have once been a mechanic's garage. I talk to the owner of one of the craft tables. She points me to the person in charge. His name is John Cobb and at the moment he is playing an acoustic cover of that Led Zeppelin song about good time rock and roll. He's also wearing a harmonica around his neck. It turns out that John Cobb is a professional portrait artist and an engaging one at that. Cobb and his wife, with whom he co-runs the Bahn Mi food truck, have apparently listened to our albums on Bandcamp more than a few times since our addition to the bill. He really likes a song that is not in the set list and never will be.

Greg tells me that in Beaumont the community is well off, that almost everyone works for the oil refinery. The women there are young, attractive, and have children. The last point is normally a deal breaker, a social abnormality for folks of my age and demographic. For this evening I'm choosing to ignore those voices. When you take a young family out of the city and put them into a sleepy suburb I believe that there's something of a providential light that informs their kindness and compassion towards one another. I can't help but feel that there struggles are all the more romantic because of this mutual understanding.

We set up our gear in the garage and after a quick sound check we blow the head of the PA. This rock star moment is significantly reduced by Cobb’s confession that he also blew the PA in the previous hour, by running a lone vocal mic into it. While John searches for the answer Greg rises to the occasion. "We've got a PA at our house," Greg says to us. John's eyeballs start to shake with new excitement.

Thirty minutes later we're back on track with a new sound system and ready to go. John asks us to make an announcement on the mic. "Hi, we're sold out of food for the rest of the night. We've got CD's for sale. They're on the chair." There are a few dudes looking at my beat-up 70s-era instrument. The children of the young mothers line up in front of the garage. A minute later the dudes nod approvingly at the arrangement of loud-as-fuck drumming and new wave guitar lines. The children twitch along to the electronic backing track. People begin to stuff a donations jar with $20 bills. The frontman is perplexed. I egg him on. With every song it feels more like fun. At least more fun than the previous shows were.

There's an element of beauty in the air as the day slowly turns to night. It existed within the simplicity of the moment and the revelation had within it, which is that there's no ideal crowd for a band to play to. It's more important to have your music connect you with total strangers. Beaumont reminded me that it’s often far more important to have true faith in the normal, not the ideal.