Nothing brings people together quite like cold rain and good music. 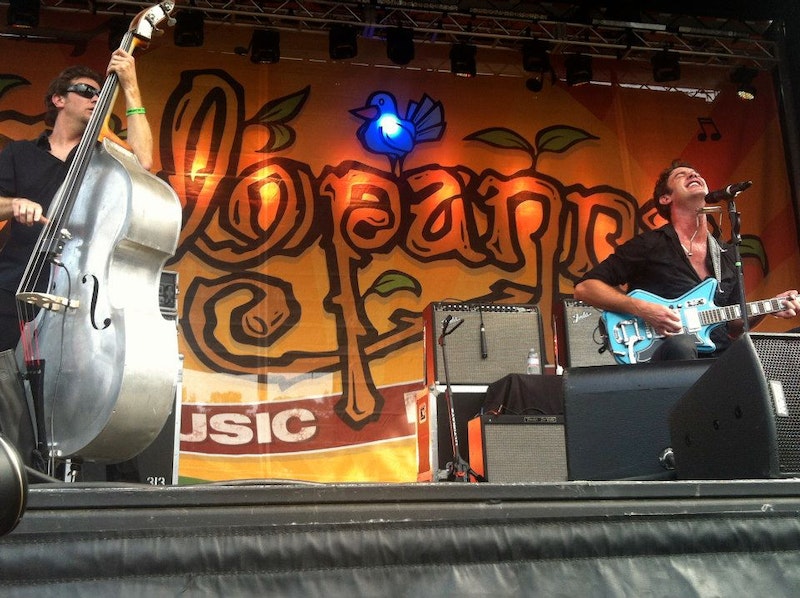 The Silopanna Music Festival began on a beautiful Annapolis day last Saturday, with three stages at the Anne Arundel Fairgrounds. Popular local bands like Jimmie’s Chicken Shack, Sweet Leda, and Pasadena played on the lawn and pavilion stages while the main stage featured the sweet-voiced Audra Mae and Robert Randolph & the Family Band. A progressively bigger crowd moved to the main stage in the mid-afternoon sunshine as the first headlining performers tuned up.

G. Love and his notorious Special Sauce were welcomed by a roaring, pumped-up crowd, and responded with genuine smiles. They kept grinning as they opened with a better-than-the-album version of “Sweet Sugar Mama.” G. Love even threw his harmonica into the crowd, into the hands of a stunned teenage boy. They banged out great performances of their popular hits, “This Ain’t Living,” “Don’t Kiss & Don’t Tell,” “Cold Beverage,” and then invited Robert Randolph to come back on stage to play an electric dulcimer (slide guitar). G. Love stayed a step ahead of his audience, charming them with a smile while “House Man” kept a jamming beat and Timo Shanko played a tight bass that balanced the sloppy blues. After almost every song, G. Love opened his arms to the crowd as if to hug them all and hollered vulgar variations of “thank you.”

They ended the set with an ecstatic performance of “Booty Call.” G. Love even joked with the drummer about forgetting to prepare “the clean version with such a beautiful crowd on a beautiful day,” then paused to add, “Man, I don’t know the clean version. Let’s give them the dirty one.”

After he left the stage, the crowd moved to the booths and vendors, including one where I finally registered to vote. There were artists, hairstylists, hats, clothes, jewelry, a guy who made finger pianos out of old cigar boxes and five or six food vendors. As the time for Citizen Cope’s set approached, so did a dark sky, flashes of lightning, and a voice on the loudspeaker that advised everyone to go to their cars until the gates were re-opened. People sluggishly moped out until the hard rain began to fall. Huge raindrops produced a sort of catchy rhythm on the 1980s Benz I found myself in, but it wasn’t Citizen Cope, and we were all nervous about the fate of the festival. When the rain suddenly stopped, a damp collection of people gravitated back to their places in the mud pit of the fairground. As soon as the first chord was played, it seemed, rain shattered onto the crowd.

Somehow, though, instead of a hindrance, the storm gave the audience a sort of energy. By the time Cake, the headlining band, walked onstage, the boozed-up crowd had achieved an unforeseen level of rowdiness and sheer excitement. Cake walked on, seemingly unenthused, and started the show with a slow, mellow song that I enjoyed but didn’t recognize. It was like they wanted to sing the screaming people to sleep. When the rhythm picked up, the crowd become electrically charged by lightning and began screaming, shrieking, shoving, and eventually throwing light sticks at the band. Lead singer John McCrea stopped the show, scolding his adoring fans, saying, “Don’t fucking throw trash at us. It’s dick behavior,” which only revved everyone up more, to the obvious disapproval of McCrea. They played a short set, and “didn’t have much time” for an encore. They chose wisely, though, saving their most popular hits for last, and leaving more of a sweet taste in the trash-throwing mouths of the crowd.

I made it out of the swampy maze of cars and drunks at midnight, satisfied with the experience. Nothing brings people together quite like cold rain and good music.