Past and Future Blips

Co La and the Mourning Bots 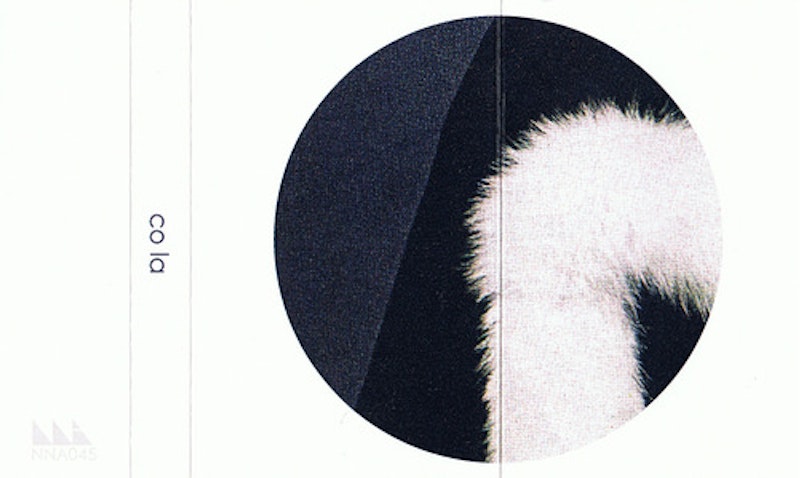 The first three seconds of Co La's Soft Power Memento (released in June) is a drum intro that could be from an acoustic jazz set. Instead of a band kicking in, though, the synths do; lurching looping beats, squeaky whistles, steam engine hiss. There are horn samples too, in a mournful-duck-meets-Miles-Davis vein, the sad honking protesting its own repetitive foreshortening. The result is both exhilarating and oddly plangent, as if mastermind Matt Papich is writing an elegy to the music as he vivisects it.

If Dr. Frankenstein built Lester Young from spare synthesizers and cassette tape, the monster would sound a little like this. The track's title, "No Burden," is less an ecstatic celebration of hippie freedom than a sad wink. Liberated from the hand that held the horn, the music is still haunted by the body it doesn't have; little computers hopping about the studio like popcorn, wishing that bytes were lungs and electrodes could breath.

The rest of the EP wanders fairly far afield stylistically, but Papich always retains that lyrical, melancholy charge. "The Oppressor" flirts with a more aggressive grimy industrial vibe—the titular dictator has apparently sentenced a rock guitarist to be ground to death between two boilers. But the squawking, the heaving, and the nervous jitterings keep giving way to those drifting, fading horns. Eventually even the sturm und drang starts to seem poignant, as if Nine Inch Nails has been hijacked by Belle and Sebastian. "Dr. Oblivion Soundcheck" is less resolutely bipolar, but includes some of the same features—harsh dragging squeaking sounds juxtaposed with a spattery beat that nonetheless manages to sway sweetly—plus a noise that sounds eerily like squeezing a clown nose. The track dissolves into a fusion solo with looped backing that sounds like a lift from On the Corner before righting itself again to head into a cute fade out.  "…And they're still playing that somewhere," as my local jazz DJ Dick Buckley used to say—though, of course, in this case, there was no "they" playing it in the first place.

The EP's high point, though, is the five-minute "Love Nest." Papich starts with a beat that stops, starts, and hangs with a dreamy delay that's almost a hook in itself. Then he layers on one of those long heartfelt horn sounds, and finally adds processed, multi-tracked harmonized vocals. The result comes across like the Beach Boys lost in a pastel video game, their little digital eye blobs focusing and un-focusing as they wait for the mellow digital weed to hit their digital brain chemistry and an occasional retro-Atari-alien on a pogo stick goes bouncing leisurely by. Again, there's a feeling that the past is being ruthlessly strip-mined for parts and simultaneously remembered with wistful sincerity, so that Papich makes his cake-icon in the future and gets to eat the original too. Or, perhaps, that he gets to be super-hip like fusion Miles chasing the funky new sounds while also and simultaneously glorying in sentimental glop like Abba.

Co La's two-part name is a good metonymy for his virtues. Electronica can be irritatingly busy music, but Papich's songs are filled with space, an emptiness against which the multi-layers take on shape before they sputter and disperse. That space is also, I think, responsible for the sense of time; the feeling that jazz is waiting out there, a possibility that honks and peeks its horn in, but never quite coalesces. Soft Power Memento feels like an unquantifiable keepsake of itself: nostalgia fed into a processor and coming out as a replica of itself, only slightly goofier and sublime.