The Return of Three Conquering Heroes 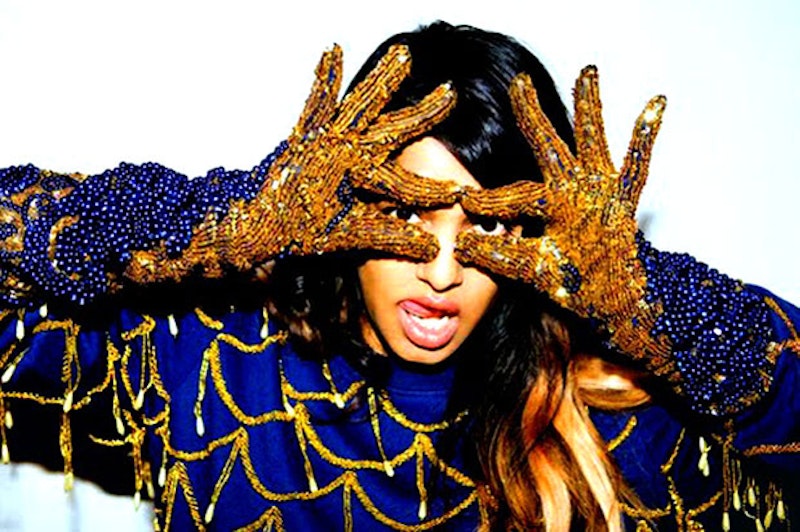 Brand-management strategy doesn’t come much cannier than "Come Walk With Me," which can be interpreted in a variety of ways. Percussive hotfooting for the house/dance heads; applause paste samples your Grandma could emulate; a flip of hip-hop's hoary "throw your hands in the air if you just don't care" ethos to appeal to those who never got into rap or are totally over it now; post-Holly Ramos-in-Fur vocal mawkishness (vocal and lyrical) to appeal to shy tweens bravely raiding older sisters' hard-drives; generic, aspirational sunniness; Bollywood/world-music vibes for those for whom "world town" remains a viable meme or point of identification; a pointed swear word for those who need that in pop; an intimation of utopian or relational togetherness; sly appeal to rising beatsmiths to palm off a beat CDr at the Matangi listening party; an outro that winks knowingly at "Bamboo Banga" from Kala; which was the last time most M.I.A. fans gave a shit about M.I.A. Which is a rather unwieldy way of saying that "Come Walk With Me" feels both opportunistic and workshopped, too weird to move millions of units yet too cotton-candy lightweight to be a genuine indie-rap single. Like "Bring The Noize," it's buzzy and caffeinated and will likely make more sense within the context of Matangi, which, honestly, so far sounds way more promising than 2010's Maya did. I hope Santa will bring a mix of this song that's got a slightly higher BPM count and sounds like, well, this, which features an intrinsically doper video treatment.

If I had my druthers—and infinite time and walking-around money—one of the projects I'd pursue would be a genealogy of physicality in Jason Crumer's recordings; the Baltimore noise artist is on record as someone who puts a lot of work and planning into the sounds that form the basis of his compositions (What Is Love? immediately leaps to mind), and the forthcoming Disqualifier (Blossoming Noise) is an especially tactile album. "Wellsley's Philosophy," for example, is so physical and industrial that my shoulders ache just listening to it. There is the abusive onslaught of men hollering what sounds like a protest slogan, the clank of ores daisy-chained into a rhythmic cadence, the budda budda budda of thundering blades and the intimation of collision and breakage, tub-thumping, incidental machine music glowering underneath. Or that's what I'm hearing here, anyway. Eventually swells of static and synthesizer surge in to cleanse the loading dock of everything except a set of austere bell tones.

Trent Reznor's obsessive-compulsive attention to compositional detail has grown into his greatest strength, and a lot of what makes "Running" so satisfying is how the song treadmills steadily into a trap of its own making. It begins with a veritable fiesta of percussive elements, wagging-tail synthesizers, and daydreams of egress: "I'm running out of places I can hide from this," the Great Nail complains, with a resigned indifference, again and again. And then "Running" accelerates craftily into a sort of self-fulfilling prophecy, turning up the volume while cluttering the sonic frame with more things that knock and bop and quiver in imitation of an especially complicated machine. Then, suddenly, there are several Reznors grousing simultaneously—one of them under the grand delusion that he is in actuality Thom Yorke—as though Reznor has very literally run out of places to hide, to the extent that the man can't even close his eyes and ball up on the floor of his walk-in closet to escape the thing he's so determined to run away from: himself.