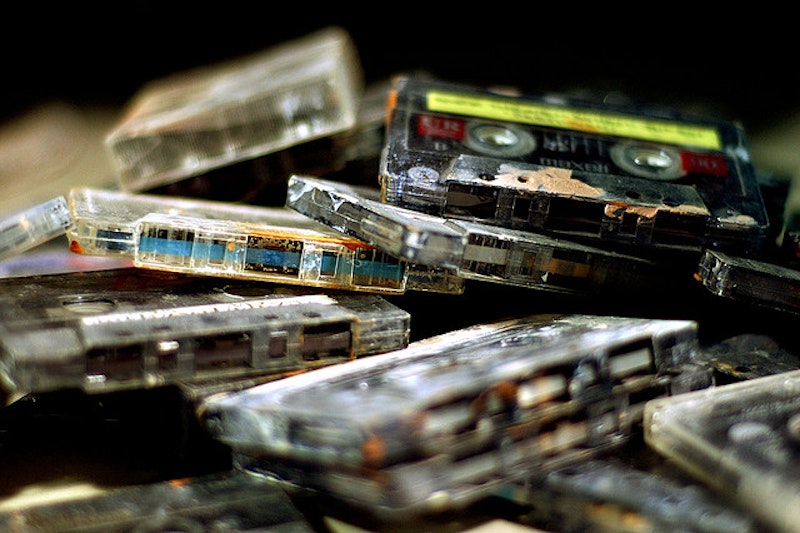 I wish cassettes were like candy bars or cigarettes or beer, a daily/semi-regular expense consumed and disposed of quickly. Separate recycling bins for paper J-cards and plastic cases. Re-usable cases and recycled cassettes would be an under-utilized “good will” option while tangled glossy copper weaves of magnetic tape would litter side streets and highway medians like take out containers from Sbarro do now. I usually end up misplacing either the tape or the case, and both collect dust after one or two listens. I feel like a prick using an Optimus answering machine for listening, like using a plastic needle to play records on a toy turntable. One tape has stuck in my mind and in my answering machine since February: Weird Priorities by Ever Ending Kicks (Paul Benson), whose chrome clean singing and guitars gain just a bit of grit from rubbing over dirty, overused tape heads, a beautiful thing. Cassettes are “abundant,” but in the same way Magic: The Gathering is, only to the people already playing the game, to a greatly diminished degree.

Earlier this month, Cassette Store Day fair/bazaar/flea market was neat: half a dozen vendors representing endless micro-labels and bands that have been on the road with no breaks since the Bush administration dozing off behind a haircut station playing the hypnotic “Smiling Off” by Black Dice. A nearby rack stocked with non-cottage industry stuff like Prince’s Sign o’ the Times, Nirvana’s From the Muddy Banks of Wishkah, and The Breeders’ Pod was well-trafficked and thoroughly pored over. The one thing I bought was a four-way split from fellow Baltimorean Adam Lempel, featuring Tacobonds, Groundcover, Weekends, and Echo Hey Hello. On “BPM4,” Japan’s Tacobonds play in tight tight tight fourth note blasts, compressed guitars and snare hitting in a glorious deep-fried unison, having somehow absorbed 50 years of rock ‘n’ roll in a single note. They glide through straight rock wailing, then throwing themselves back into an ecstatic major chord run recalling the late great Ponytail. Groundcover plays somewhere between dub and Steely Dan, “IO” is an extended work out full of obscene saxophone soloing, like a lurker spreading his trench coat and letting his freak flag, um, fly. Yes, they love the Mars Volta too.

Weekends’ contributions “Killer Crush” and “Long Dive” work perfectly as instantly gratifying “junk food pop,” with primary color hooks that’ll do your mind a lot better than another drink after a long night. No words sung on this compilation are easily intelligible, but the music is breezy and porous, shimmering and harshly divided and consolidated like a gem. Echo Hey Hello contribute two new wave groovers “Kick Flip” and “Derailed,” bringing to mind Stereolab and the theme music for the Thunderbirds! I’ve already lost the case for this tape, but it hasn’t left my, uh, player, and at five bucks a pop, that’s a better deal and more cost effective than beer, at least. Well, call me when the bodegas stock Friends Records.