The Orchestrated Epiphanies of Haley Fohr

Circuit des Yeux’s Reaching for Indigo is a thrilling and uncompromising dive into darkness. 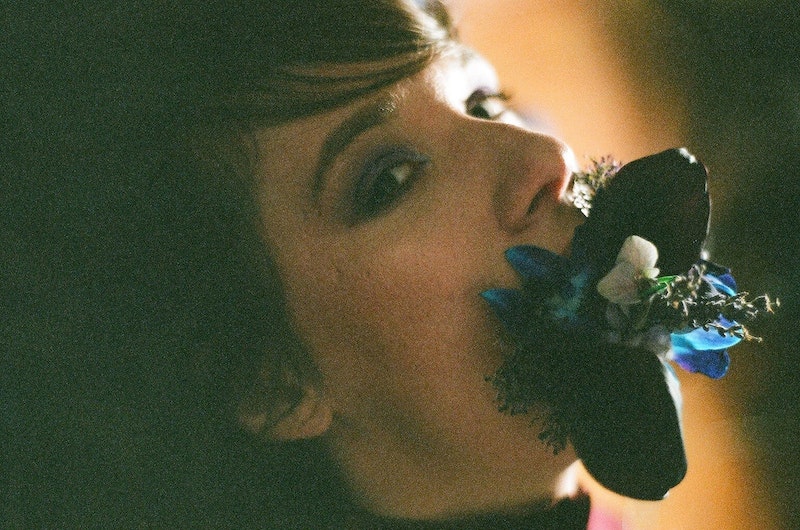 When I went to see Animal Collective at the 9:30 Club in May, I was late, and arrived maybe halfway through Circuit des Yeux’s set. Animal Collective have always had great taste in openers (past tours featured Grouper, Kaitlyn Aurelia Smith, Black Dice, Eric Copeland, Gang Gang Dance, Daniel Higgs, Pantha du Prince, Ratking, and Actress), and as soon as I walked in I snaked through the crowd to the front, stage right. Circuit des Yeux (Haley Fohr) was performing by herself, equipped with only an acoustic guitar, some pedals, and her voice. It was stunning: Fohr looked feral strumming and lashing and scratching at her guitar, howling against a dense, serrated drone of feedback and looped guitar.

It reminded me of the heavier parts of Jim O’Rourke’s Bad Timing and Jackie-O Motherfucker. Bathed in bright red lights, she thrashed and thrilled most of the audience, and left others cold (a stranger tapped me on the shoulder and asked for my opinion: I told her what I wrote above, and she looked at me and deadpanned: “I don’t know, all I could think during her set was ‘White privilege’!” I still don’t know what the fuck she was talking about).

At the time, Circuit des Yeux’s most recent record was 2015’s In Plain Speech, and I bought that at the merch table that night. I loved it, but it didn’t sound anything like the set I saw. Her latest for Drag City, Reaching for Indigo, still barely resembles that solo set, but it’s fantastic, more orchestrated song-oriented than In Plain Speech. Fohr has a low voice, sort of like Nico, but more like something from a chopped and screwed record: I had to check to make sure my LP wasn’t playing at the wrong speed. The album opens with “Brainshift,” a devastating elegy to a former self, a former state of being. You can only infer so much from the lyrics, but the refrain of “Brainshift”—“The world wants an oath but all you can say is: ‘I promise to take up space. I can only promise to take up space’”—speaks to a culmination of clarity and purpose.

Fohr dedicated Reaching for Indigo to “January 22, 2016,” a day when she had an epiphanic experience that reminds me of Philip K. Dick’s “2-3-74,” the day that inspired the VALIS trilogy and his Exegesis, and loomed over the last eight years of his life. “It was both an internal and a physical thing. It was mostly internal but I was going through something spiritual. I was convulsing and vomiting and crying, it was really intense, it came out of nowhere, it was like somebody did this to me. It was really frightening.” Instead of Dick’s experience, which left him flummoxed and completely perplexed for the rest of his life, Fohr found an answer in that night.

“Black Fly” is nearly eight minutes long, a song that begins with layers of clean acoustic guitars and blooms into this beautiful beast, recalling the lush arrangements of Van Dyke Parks. The refrain of “Brainshift” is an answer, but here she asks the question “Is it a high dive you’re looking for?/Or a 24-hour convenience store?” Strings, modular synths, and distant drums come in, and it all builds to a frenzy, those modulars mimicking those black flies. After the piece climaxes, we’re led out with stacked violins looping the same short phrase over and over again, pleading for answers that don’t come. Side two opener “Paper Bag” begins with A Rainbow in Curved Air synths and ping-ponging, syncopated cut-up vocals reminiscent of Philip Glass’ Koyaanisqatsi score. A couple of minutes in and it’s out with the minimalists: Fohr and her band kick in with a sick locked-in groove, propulsive drums and loping guitar lines under the lyrics “Stick your head into a paper bag/And see just what you find.”

In that same Loud and Quiet interview, Fohr refers to Reaching for Indigo as her “magnum opus,” and the interviewer notes, “Fohr isn’t reserved in coming forward about the pride in her own accomplishments and it’s refreshing to see such self-assuredness and conviction coming from an artist who may usually be reserved a spot in the pile marked ‘weirdo underground experimental stuff.’” The aggressiveness of that performance I saw in May, and the meticulously crafted compositions and arrangements on Reaching for Indigo thrill me, and Fohr’s confidence is a welcome change of pace from the typically demur and aloof citizens of the American underground.