This is the music that fascinates me. 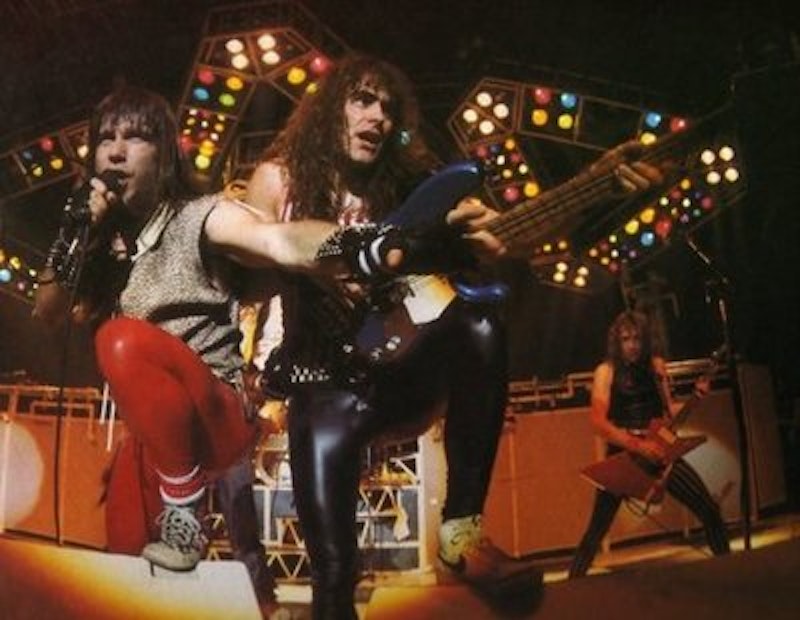 I’m listening to music from only two decades ago. These months of listening almost exclusively to music of the 1980s and early-90s hasn’t been an exercise in nostalgia. More like its opposite: a long-term listening project to trace the development of metal and prog rock. This has taught me a lot about those genres. And much more about music in general.

In my 40s now, I’d grown up with music as a finite and physical resource. Whether on wax or vinyl or magnetic tape or optical disk, you paid for albums. You heard new music on the radio, maybe saw it on a TV station that played music videos, or, as in metal’s youth in the 80s, you traded mixtapes with your friends. In any case, your ability to listen to what you wanted to was limited. That was only natural. When music was bound to physical recording media, how could you imagine a library big enough to hold everything?

That was then. By the end of 2015 I was uneasily aware that this was now. Thanks to Spotify and YouTube I could listen to virtually anything ever recorded, whether I owned a copy in some form or not. It was tempting to listen only to the things I loved. But the great unknown beckoned.

Over the last three decades or my tastes had shifted heavier and heavier: Rush to Iron Maiden to Opeth to The Ocean. I hadn’t listened to metal much in the 80s, but that was the direction in which I’d drifted ever since. By 2015 I knew the outlines of the metal genre, the band genealogies and big names. But I still didn’t have a good sense of the form as a whole. I knew the map but not the territory. Crucially, I didn’t know how many other bands were making challenging and invigorating music that I’d love if I were only to hear it. I didn’t know how many, in years past, had made that powerful music. Once, it would have cost me something to find out for myself—even if I’d wanted to pirate music on such a large scale, it would have taken download time and hard disk space. Now, though, everything I could want to hear was waiting for me.

What did I want to hear? Metal and prog, all the stuff I didn’t know. I decided to start in 1980 and work forward. First I made lists: I went through Ian Christe’s invaluable history of metal, Sound of the Beast; Wikipedia; progarchive.com, and my favorite metal review site, Angrymetalguy.com. I added a few other bands I’d always been curious about. I ended up with a year-by-year list of albums, a couple of hundred for each year. And started listening. Since I spend most of my day either reading or writing, listening to something, I went through a year in about a month. I kept lists, a rough ranking of albums, with notes to remind me of what I’d heard. I started in January last year, and now I’m closing in on the end of 1997.

Some of that’s specific to individual bands (for example, I learned that Black Sabbath’s post-Ozzy albums are a lot better than they get credit for, once you ignore the albums not originally planned to be released as Sabbath albums). And some of it’s of purely personal interest (the 80s band that most impressed me wasn’t metal, but the folk-punk New Model Army). And I learned that my main era of musical nostalgia wasn’t the 80s, as I’d always vaguely assumed, but the 1990s—I only realized in putting my lists together that while I had about four or five CDs for each year of the 80s, I had 10, 12, 16 CDs for each year in the 90s.

Mainly, though, I learned things about music as a whole. I listened to enough albums from each year that I was immersed, briefly, in that year. I could hear 1980 all over again, and 1981, 1982, and onward. I could hear things change. Could hear new production techniques and musical ideas emerge, year on year. Could hear other genres—world music, especially rap music—begin to influence metal.

I learned that I can’t grasp an album at one listen, only determine whether I want to investigate it further. I learned that music I’ve known for any length of time is going to sound better than new music—not just because of nostalgia, but because knowing a piece of music means knowing how to listen to it and what to listen for. Conversely I’ve learned that when an album by a band new to me, like Ulver, Katatonia or Death, immediately sounds as good or better than the music I know well, then I’ve found a band worth listening to.

I learned, a little, about what it’s like to be a music critic. I’ve got a friend who covers rock music for the Montreal Gazette; back when record labels sent out physical promo copies he kept a Wall of Crap in his apartment, shelves full of CDs he knew he’d never listen to again and from which visitors could help themselves. As he’d say, it’s not that everything on the shelves was bad—but none of those albums were much better than “pretty good,” and with him having found so much excellent music in the course of his job, he knew he’d never listen again to “pretty good.” I’m already feeling the same way, given the number of new-to-me bands I’ve discovered, and the best, I think, yet to come.

In aggregate, I’m convinced music’s getting better. The best stuff from decades ago is as good as anything today, sure. But there’s so much more music being made today than there was 30 or 40 years ago, more great albums are being made. And I think the decent-to-very-good stuff is better than its equivalent from a generation ago. Artists making music now have more to listen to, more influences, more to mix together. The technology’s improved—more sounds can now be made—and music’s got a longer track record. There’s more of the past now than there used to be. More work to inspire the present.

Listen to metal chronologically and you can hear that process develop. Beyond the standard movement towards greater heaviness—New Wave of British Heavy Metal through speed metal to bay area thrash to Florida death metal—you can hear the bands coming along after the frontiers of heaviness have been pushed back finding new complexities in the revealed terrain. Prog-metal emerges, black metal develops and grows symphonic, melodic death metal flourishes. This is the music that fascinates me: not brutality alone, but brutal intelligence.

What I’ve learned that’s satisfied me most is that I didn’t miss as much as I’d feared. I realize now that I’d been afraid that I’d been alienated from music I would’ve loved as a teenager by the image of the music: metal, as conceived by non-metalheads in the 80s, wasn’t just Satanic or violent, but stupid and simplistic. Listening to the heavy metal of the early-80s, it’s a little more understandable. Still unjust; the best stuff was great. But there was a lot of generic heaviness to sort through. Metal hadn’t distinguished itself from rock the way it has now. The things I like in metal hadn’t developed. The genre’s only become more complex these past decades, more experimental. Lyrics and album concepts have become more fantastic and supernatural. If I hadn’t missed as much as I’d feared, I found value in tracing the process as it happened.

I’m fairly sure that I must be a metal fan. I’d been reluctant to say so before beginning this project: there was too much I didn’t know, too much I hadn’t heard. There still is. Nobody can listen to everything. A writer at Angrymetalguy.com once observed that they get 15 promo albums per day, and they don’t get everything that’s released. But at least I know more now than I did. I know better the shifting line dividing the ironic from the serious, in the iconography as in the music; and I know what side I stand on when. I know what bands I want to spend time listening to, better than any algorithm yet developed. When I’m finished—somewhere in 2020, to judge by the number of 21st-century albums I have on my list—I’ll know more than I do now, just as I know more now than I did before I started. It’s not until you look back along a path that you see how far you’ve come. That’s what I’ve been doing; and it’s been worth the trip.