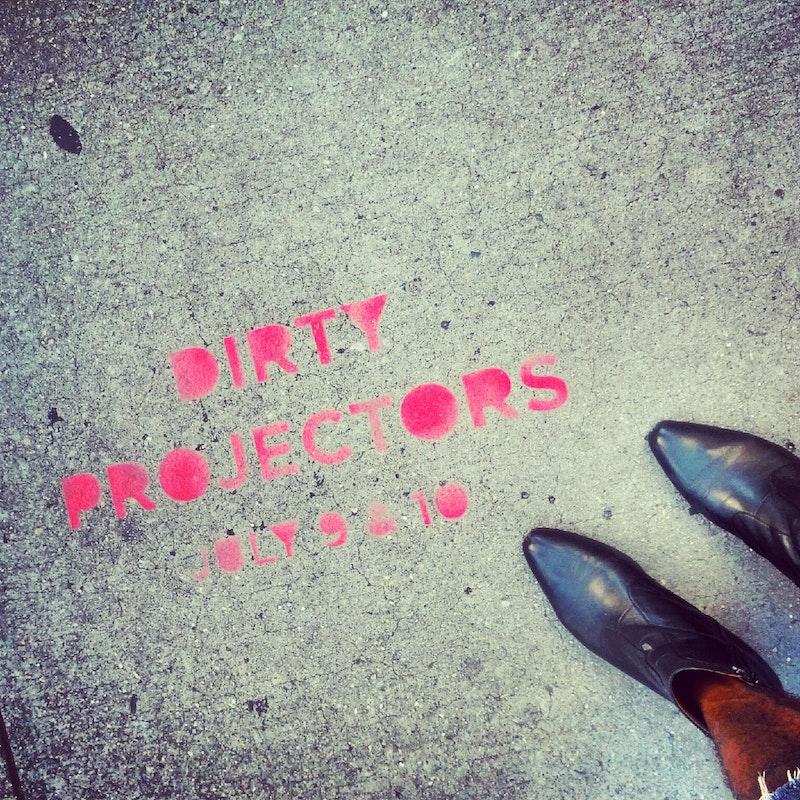 You know you’re listening to a Dirty Projectors record if you can’t tell whether you’re hearing indie music or some kind of ironic Gregorian chant. And the way the band marries a love for making music as creative expression rather than for producing sprawling pop hits, sacrificing interiority to sell millions and millions of copies, has always been my favorite thing about this heavily experimental, Brooklyn-based indie rock outfit. The Dirty Projectors most recent release Swing Lo Magellan, out now on Domino, proves it’s possible to write songs that are interesting on their own which can still achieve broad appeal.

Swing Lo contains 12-beat-driven experimental songs that explore sonic structure and the instrumentality of the voice itself. Critics have described Swing Lo as a more direct, approachable record than the band’s previous releases, another way of saying that the album seems less conceptual, less in-your-face-weird as before. But if you know the Projectors, you can tell that “Offspring are Blank” is a classic Dirty Projectors record: lead Projector Dave Longstreth is underlined by pointillist, sliding, schmaltzy experimental choral harmonies sung by Amber Coffman and Angel Deradoorian, and all of this set to a heavy R&B-influenced beat that bursts into a rock chorus. The less chant-y but still beautiful “About to Die” has drums and claps that sound like popcorn overflowing out of a pot. But one of the real gems on the record, the song that’s been stuck in my head all week, is the album’s lead single “Gun Has No Trigger.” The structure reminds me of an unaccompanied Bach sonata and its coolly minor key haunts while Longstreth sings in a rockabilly voice while a choir of harmonies and voices coast underneath him. On “See What She Seeing,” a searching portrait of youth and the search for love, he sings about girls and being hungover.

I’ve been waiting for this album since it was first announced, and posters buzzing its release are all over New York. I have to admit, however, that at first play I was sort of unimpressed. It just didn’t seem as explosive as 2009’s Bitte Orca, which I love and still listen to incessantly. But then I remembered that I didn’t love that album at first listen, either, and over the past several days Swing Lo has really grown on me. With each listen I hear how their musicality is new and even more refreshing.

And that’s the singular beauty about The Dirty Projectors. They are a weird, acquired taste. What makes the Projectors so weird is their compositional style—a peculiar blend of smooth, experimental art school chamber R&B pop. Maybe the defining Dirty Projectors “trope” is that they almost never quite sing the right note. Actual notes are so overrated, the band suggests, and isn’t it more interesting to find the path to the pitch rather than just starting with the right one straight away? This kind of schmaltz produces jarring harmonies that sound like a voice attached to a knob or slider you can move up or down—a really cool effect.

On their 2009 Domino Records debut Bitte Orca, which spawned R&B-inspired joints like “Cannibal Resource,” the energetic “Useful Chamber,” and “Stillness is the Move”—a record so smooth that even Solange Knowles, Beyoncé’s little sister and sometimes DJ on the Brooklyn scene, memorably covered it—you notice the ways Longstreth plays with traditional sonic form. On the nature focused Mount Wittenberg Orca, a follow up EP based on a collaboration with Bjork that was released in 2010, the band plays with sound and form in a way that could potentially annoy the untrained Projector fan, but the point is that your sense of how a song should sound is challenged.

Dirty Projectors may be an indie rock outfit, but they are more like a small experimental chamber ensemble. And to my mind, Swing Lo is not necessarily more direct than their other records, as critics have suggested. Rihanna is direct. Katy Perry is direct. In that world, the popiverse, listeners have to get the point right away—there’s little to no time for exploration. On Swing Lo, you discover this record at each listen and its surprises work on you until you find you can’t stop listening to it.