The Legacy of Louis Jordan

Too popular then all but forgotten. 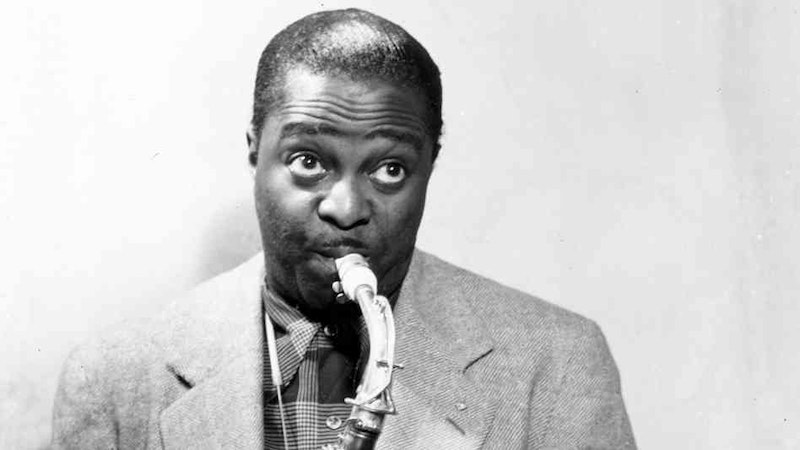 Stephen Koch’s biography Louis Jordan looks to correct an historical error. “Somehow,” writes Koch, “the name Louis Jordan hasn’t stuck. Never strictly a blues artist…too pop for jazz…too jazz for pop” and “too early to be considered an R&B or rock performer,” Jordan has been mostly ignored “by all the variety of musical genres in which he’s played a major part.” Koch, determined to fight this ignorance, shows up armed with reams of details about the man’s career and testimonials from famous successors, ready to give an artist his due.

Jordan, born in 1908 in Arkansas, quickly gravitated to music. His mother died when he was young, and his grandmother influenced his choice of instrument—“She didn’t like that blaring sound [of the trombone],” so he moved on to clarinet, and eventually, saxophone. As a 19-year-old, he played in booming oil towns, where, according to Koch, “Alcohol, blood and other bodily fluids flowed through the dirty streets.”

It didn’t take long for Jordan to make his way to the northeast, where he started impressing the right people. He recorded a session backing Louis Armstrong and earned the respect of the bandleader Chick Webb. Webb eventually brought Jordan into his orchestra, two months after adding a young Ella Fitzgerald as a vocalist. While Fitzgerald’s talents brought more attention to singers in big bands, Jordan benefitted from the opportunity to work with crack musicians. He also carried on an affair with Fitzgerald and soon had the bright idea of starting his own group—with some of Webb’s players. Webb canned him.

Not to be deterred, Jordan found musicians and began to mold a group. Like James Brown years later, Jordan would fine players for mistakes or sloppy dress. Things really started to click when he connected with the producer Milt Gabler and earned his first number one hit, “What’s The Use Of Getting Sober (When You’re Gonna Get Drunk Again),” in 1942 for Decca Records. His influential style began to cohere on songs like “5 Guys Named Moe,” driven by a relentless piano and drum combination.

If you’re not leading a trend, it often pays to be fighting it: this was the big band era, but when Jordan rolled through your town, it was just him and the Tympany Five. Despite being the smallest band around, the Tympany gang became “one of the highest-paid and best-regarded live bands” in just two years. Jordan had a steady stream of hits like “Is You Is or Is You Ain’t (My Baby),” which even became a number one on the country charts. He was also good at cross promotion—he played “Is You Is...” in the movie Follow The Boys, and appeared on screen many times. Jordan was especially beloved by the armed forces during the war. In fact, Bing Crosby was the only artist whose songs appeared more frequently than Jordan’s in a poll of the army’s favorite tunes.

But if there’s one constant across pop history, it’s that no artist dominates forever. The very best—the Beatles say, or Prince—have a peak creative period of almost a decade. Jordan’s lasted about the same, from the early 1940s to around 1951, when he logged his last number one, “Blue Light Boogie.” A number of factors played a part in his decline. After Jordan left Decca, Gabler started working with younger, up-and-coming (white) artists such as Bill Haley—in the book, Jordan’s manager calls Haley’s “Rock Around the Clock” “an out-and-out steal.” Inexplicably, Jordan also began playing with a big band, after doing so much to “put an end to the big band era.”

Changing times didn’t do Jordan any favors either. Bebop arrived, and “the revolution it created in jazz would leave [Jordan] dismissed in jazz circles.” Sonny Rollins, a famous bebopper, loved Jordan, considering his music the “bridge between the blues and jazz.” But Rollins also notes that the new wave of artists “didn’t want to be ‘entertainers’” like Jordan; they “wanted to be serious musicians.” Race relations were changing too, and Jordan stayed silent on racial injustice at a time when black music was becoming increasingly intertwined with the struggle for equality. In addition, pop criticism didn’t really get going as a field until the 60s, at which point Jordan was seen as a has-been. Looking backwards, critics mainly valorized the outsiders, often obscure bluesmen. They didn’t care as much for the innovators hiding in plain sight—the man competing with Bing Crosby in armed service popularity polls.

So Jordan “ended up falling through most every single crack.” But Koch has a formidable array of musicians testifying to Jordan’s influence. Chuck Berry created his signature riff listening to Jordan’s “Salt Pork, West Virginia.” James Brown believed that he loved “Caldonia Boogie” (a track Jordan record in 1945) so much that actually he performed it more than Jordan did. “Caldonia” was also the first non-religious song Little Richard remembers hearing. (Jordan’s sudden high screams anticipate Richard’s and Brown’s—meaning they’re grandparents to the yips and yelps of Michael Jackson and Prince.)

It’s easiest to illustrate connections between Jordan and foundational figures in rock and soul, but that doesn’t capture the extent of his influence. In 1947, Jordan recorded two important calypso songs, including “Run Joe.” Alton Ellis, the “Godfather of Rocksteady,” later noted in an interview that “ska came from American music…songs by people like Louis Jordan.” B.B. King declared that Jordan’s spoken word intros and incessant rhyming put him “so far ahead of his time—what he was doing became the origins of rap.” Jordan died in 1975, without receiving the second burst of interest sometimes accorded to older artists. He somehow managed a remarkable feat: ignored both for being too popular and for being way out in front of the curve.