An interview with Zoe Muth. 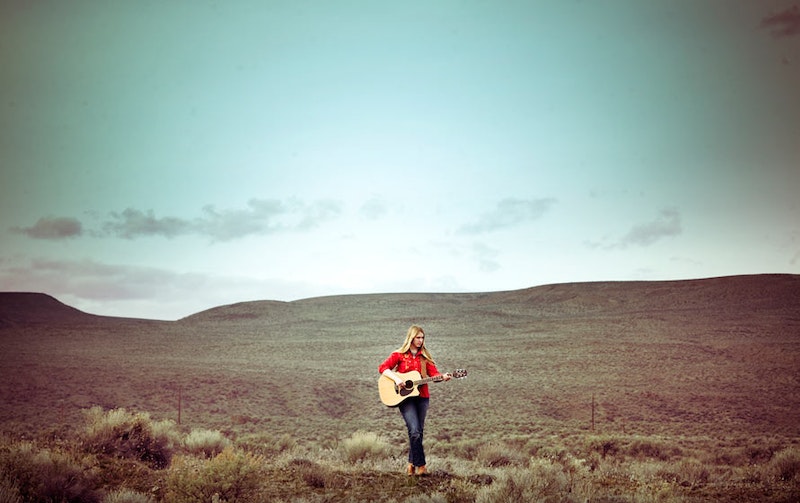 Zoe Muth's latest album, World Of Strangers, comes after a move that’s destined to impress couples and critics alike: the singer and her husband left Seattle for Austin on the first day of 2013. For Muth, who works in country or something close to it, moving from Washington—not known for its country scene—to Texas could have important ramifications. After all, Texas has produced some of that genre’s most important singers, including the Georges (Jones and Strait), several “outlaws” (Willie Nelson, Waylon Jennings), and recent stars like Miranda Lambert. At a show last week in Brooklyn, Muth covered Townes Van Zandt, another Texan. But Muth thinks moving to Austin actually caused her to expand her sound. “My music has become less ‘country,’” she writes in an email. “I really wanted to make a change on this new record.  I wanted it to be more ‘me,’ less something you could just stick in a category.”

To bring about this alteration, Muth worked with new musicians and relied on a different process in the recording studio. “On the first two records,” Muth says, “we'd already been playing the songs live and knew exactly what we wanted to do. On WOS, the other musicians had never even heard the songs.” She connected with George Reiff, who has played bass for the Tedeschi Trucks Band and the Courtyard Hounds (two of the three Dixie Chicks) in addition to producing a number of projects. Reiff had connections to plenty of studio talent, including current Courtyard Hound Martie Maguire and the artist Bruce Robison, who maintains a solo career and also writes hits for Tim McGraw and Leann Womack. But Reiff wasn’t just a recruiter; he also played an important role as Muth’s “musical translator.” She “could describe a sound or feeling or give a reference to an old record and George could translate that in musical terms” for the players.

“Old records” are very important to Muth—she gets most of her inspiration from “country, Stax stuff, folk-rock.” She doesn’t listen to a lot of recent country music. “Even the contemporary songwriters I love are getting old,” she points out. “[S]ome modern stuff that's considered really classic doesn't really appeal…it seems like a put on.”

World Of Strangers opens with “A Little Piece of History,” a song describing that move from Seattle to Austin. Muth’s lyrics are uncertain—“these dreams and illusions are hard to tell apart,” “never said I knew, never said I had a clue”—but it doesn’t stop her: “we put everything in boxes, left early on New Years Day/so many things we thought we couldn’t live without, we just gave them away.” The bass is full and reassuring, and the guitar signals a brighter future, playing long, jangly lines that suggest both the Gram Parsons edition of the Byrds and the late 1960s country pop of Kenny Rogers (“Ruby Don’t Take Your Love To Town”).

Muth succeeds in stepping outside of category on several songs. “Too Shiny” has the same sort of economical rollick as the Rolling Stones’ greatest outtake, “Do You Think I Really Care.” “What Did You Come Back Here For” exists in a mildly funky sphere that encompasses both contemporary indie-rock ballads and the strand of modern country that draws from 80s Quiet Storm R&B (see Miranda Lambert’s recently released “Smokin’ And Drinkin’”).

Still, Muth’s affinity for country is undeniable: “Mama Needs A Margarita” has the skeletal melancholy of a 70s George Jones song—a few piano chords, all played with one hand, and booze at its center, functioning as both an escape and a trap. Alone with her baby, Muth sings, “nothing to do, nowhere to go to,” inserting a lengthy pause before the couplet-ending “to,” as if she’s so bored she can’t bother to finish the sentence. The hook finds her lulling the child to sleep: “Mama needs a margarita, a slow song and two strong arms to lead her.”

Contemporary country singers who channel singers like Jones or his 70s colleagues seem to become melancholy very quickly. On his second album, which came out last month, Sturgill Simpson lost much of the amusement and sarcasm present on his first release; Muth also tells fewer jokes these days. Her previous album contained “If I Can’t Trust You With A Quarter,” in which she gives a man a quarter, he picks a bad song on the jukebox, and she realizes they aren’t romantically compatible: “When I heard that jukebox start, I knew the cupid’s dart had missed its mark/If I can’t trust you with a quarter how can I trust you with my heart?” (Later on the track, she also inverts the trope of the obnoxious male record collector: “Well they say a good man is hard to find/when your taste in music is as good as mine.”) Now Muth’s quips happen mainly on stage. At her show, she joked that she was “selling coasters, stickers, and first-born children,” though if you wanted one of those kids, she couldn’t “guarantee they are gonna be good looking.”

But the lack of humor doesn’t hurt World Of Strangers—if Cat Power had recorded it, the Internet would be aflame with “best of the year” talk. Muth is unperturbed by the strange rules of pop’s marketplace. On “Make Me Change My Mind,” she sings, “I ain’t burned all my bridges in this town yet/I know a few bartenders who still let me live on the money I say I’m gonna get.” And when her credit runs dry, she knows she can uproot and start again.

She answered a few questions:

SPLICE TODAY: This is your third full-length album. Is your songwriting process different now that you have two other albums under your belt? Do you write all the songs, or are some of them collaborative?

ZOE MUTH: Process is the most part the same. Though I've collaborated on a couple songs in the past, these new ones were just me. I have a lot of trouble sharing a song that I don't feel is lyrically complete. Also, I'm stubborn and always wanna do things my way.

ST: I read in an interview in which you said that recording this album was a bit more experimental than recording your first two. Could you expand on that? You also recorded with a different set of musicians—what kind of ideas did they bring to the recording process?

ZM: On the first two records, for the most part, we'd already been playing the songs live and new exactly what we wanted to do. On WOS, the other musicians had never even heard the songs, but we had George Reiff to be the musical translator. What I mean by that is that I could describe a sound or feeling or give a reference to an old record and George could translate that in musical terms, something I've never really been that great at. To have a feeling and be able to hear someone else express it with their instrument is really an awesome thing. These folks all helped me do that.

ST: Where do you find musical inspiration? Do you listen to any contemporary country?

ZM: I still get the majority of my inspiration from old stuff, country. Honestly, I really love peace and quiet too. I get inspired by great music, but also just people watching. I need a lot of quiet to put it all together.

ST: Texas has a long history of producing important country musicians—you covered Townes Van Zandt, a fellow Texan, the other night. Now that you live in Austin instead of Seattle, do you feel a different connection with country music?

ZM: I actually feel like my music has become less "country" since moving to Austin. Some modern stuff that's considered really classic doesn't really appeal to me, in a way it seems like a put on. I think that's why I really wanted to make a change on this new record. I wanted it to be more "me" less something you could just stick in a category, in this case "country."

ST: How did you link up with your label Signature Sound, from Northampton Massachusetts?

ZM: We opened up for Eilen Jewell, another Signature artist back in 2010. She liked us and told Jim Olsen he should sign us and he did! By April 2011 we were releasing our first record with them, Starlight Hotel.

ST: You’re on tour right now—what’s your favorite city to play in so far?

ZM: I'd say Santa Cruz, CA. It helps that we've had a lot of support from KPIG radio. Plus it's just beautiful out there.