It Hurts So Bad to Make You Mine 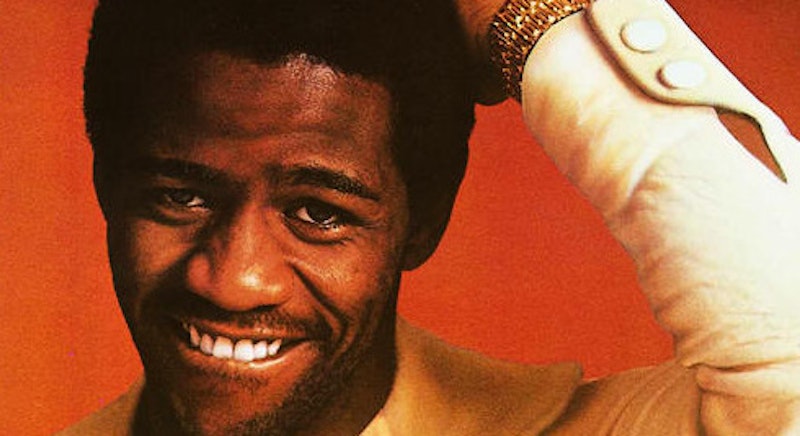 Pop musicians often present themselves as hyperbolically powerful and hyperbolically vulnerable; larger than life gods bewailing their lost loves. Robin Thicke's "Get Her Back" is a recent iteration, with the singer staring soulfully into the camera, his face beaten and bloodied, while a slinky model runs her hands over him. He's at once a wounded man and a superstud. But Thicke's glib binary posturing pales in comparison to one of the all-time pop power/vulnerability trips, Al Green's 1970 single "I Can't Get Next To You."

The song, written by Motown stalwarts Barrett Strong and Norman Whitfield, was originally a massive 1969 hit for The Temptations. Their version comes across as a straight-up goof. The lyrics are sung in round robin; one singer declares "I can turn a gray sky blue"; the next replies, "I can make it rain whenever I want to"; a third volleys "I can build a castle from a single grain of sand," and the fourth declares "I can make a ship sail on dry land." It sounds like they're one-upping each other, and the plea "I can't get next to you" comes across less as desperate begging than as cheeky punch line. The guys seem to be performing for themselves rather than a romantic interest; it’s designed as a silly high-school cutting contest, with girls gathered around giggling as the guys each make their individual boasts or pleas. Thicke's video, which is purportedly an actual effort to reconcile with his ex, is pompously serious; The Temptations, on the other hand, are cheerfully bullshitting.

Green's version of the song is more ambivalent than either. The song starts with Al Jackson's tough, supple drumbeat, funky and ominous. A chorus declares "I!" and Green responds with all his soulful sincerity. Where The Temptations sounded like they were playing around, Green really seems to believe that he can turn a gray sky blue, and/or can make it rain when he wants to. That only makes it the more pitiful, though, when he confesses, with hesitations and stuttering and moans, "I'm happy with all the powers that I possess… girl you're the key to my happiness and I can't get next to you."

The Temptations played the tension between power and vulnerability as a kind of joke; in Green's version, it's still funny, but the funniness has an agonized edge. On the second verse, the chorus "I" comes in again, and Green starts to respond, but gets lost and distracted, muttering, "oh, my, my my" rather than enumerating his superpowers. He mentions again that he's happy with all that he possesses, but when he tells the girl she's the key, he can't even spit out the word "happiness," as if it's just too painful.

The best part of the song isn't Green's at all, but a brief, searing guitar solo by Teenie Hodges. It's absolutely rock; a masculine balls-out swagger that Hendrix or Jimmy Page would recognize. But in its fuzzed-out keening, it also mimics Green's vocal performance; Hodges is both the super-powered guy god and the pitiful defeated spurned lover. As the track heads towards its end, that dynamic only intensifies; the drums and horns hitting harder and fiercer as Green's pretense of competence gets thinner and thinner. "I've been trying to call you all day long, but I don't have your phone number, honey… I been, I been thinking bout you baby something awful." Right at the end he sings, "Sometime I feel like I want to moan about it, and I just don't know what to say and I say," and then he unleashes a high-pitched cry. It's like the last super-ability he has left is to wail in agony.

Green's performance, like Thicke's, is somewhat creepy. Does this woman he's pursuing really want him trying to call her all the time? Especially when he’s in the throes of some narcissistic delusion? But Green's version also retains a lot of The Temptations’ humor; he knows the claim to magic powers is ridiculous even as he tells himself to moan. But at the same time, the magic powers aren't ridiculous; Green may not be able to live forever if his soul desires, precisely, but there's no denying that the track is an absolutely virtuoso performance, from that drumming to that guitar solo to Green's inimitable barrage of vocal hesitations, tics, moans, and growls. "I Can't Get Next To You" is a supremely competent declaration of inadequacy, and a tongue-in-cheek performance of desperation. Green gets to be both the all-powerful daddy and the needy little kid. Is that because he's de-fanging the icky stalker tropes, or because he's making them go down easier? Either way, you can't deny that he gets next to you.